A Lock On: Modern Air Combat Air to Ground Mission

Hi all! We’re back with another look at this great new sim. A disclaimer is in order. These screenshots are based on Beta 15, since I wrote this while I was familiarizing myself with the title before its release. So your mileage may vary.

Many of you have expressed frustration that the Soviet mud-movers have very little, if any, air-to-ground capability out of the box. I also miss this; I have read that the Soviet aircraft should be able to pound mud with the best of them. Sadly, that didn’t happen with the game as shipped.

The key words, pilots, are “as shipped.” Igor Tishin, Valery Blazhnov and Matt Wagner aren’t stupid. They’re old in war, as the saying goes, and know that we serious simmers all have our own ideas about how our favorite fighters should be able to fight. They’ve therefore left the loadouts databases open, and hackable by the casual flier. Though it will cause multiplayers headaches, single-players will love this, because it means we can pound mud with a multirole fighter! Basically, all dumb bombs, all multiple ejector racks, all Russian laser-guided missiles, and all Russian antiradar missiles are fair game, as far as I can tell. The relevant file is called “MEInit.xml,” and is to be found in the ME folder of your root directory. If you read the file, you will see how certain weapons can be authorized for carriage on pylons of your jet, merely by copying-and-pasting the relevant code in WordPad.

For this article, I hacked that loadout database, which as you demo fliers know, can be easily altered with Wordpad. I did this because, like many of you, I am a great fan of fast-mover air-to-mud, and I miss dreadfully the old multirole Flanker of Flanker Version 1.5 fame. The release version of Lock On has none of these weapons on the Su-27 unless you hack ‘em in yourself, except the R-73 missile. The modeled version is the air-to-air only Su-27P. I’ve created the multirole Su-27S here, which is basically identical except it can move mud.

Remember, if you do this, it be on your own head. The dev team did not intend the Su-27, Su-33, MiG-29A or MiG-29S to carry certain types of ordinance. Therefore, the HUD in those aircraft does not recognize multiple ejector racks, though the weapons panel works EXACTLY like in the Su-25 and they seem to work in game. I cannot answer for use of U.S., French, or British ordnance, either. I believe BL-755, Rockeye, and Mk-series slicks will work, but I have not tried this. But the HUD displays won’t be in Cyrillic. I can’t answer for laser Mavericks, ALARMs, Shrikes, or HARMs, or any of the non-Soviet air to air missiles, because I have not tried those. And the MFD code is gone, so IR and TV guided munitions are right out, though the Russian fast movers can HUD-target the laser missiles, just not the bombs. As for the F-15, I have not tried to hack its loadouts, but I’d be surprised if any of this works for it; I believe that for the Russian birds, there is legacy code on board that lets us play with their loadout options. Further, I have not yet tried this with the game’s release version but the MEInit.xml file is still open. And mark these words well: If you do like I did, DO NOT complain to SimHQ or the team when it doesn’t work quite like you want it to! These mods are unwarranted. Period.

Now, keeping that in mind, sit back and relax: the Sukhoi Su-27S is about to enter stage right!

My name is Sacha Dimitrovna Andreevna. You remember me, yes? On a warm day in summer I was called into my Commander’s office at our base outside Sochi…goodness, I forget myself. Yes, you will remember that I am a pilot, just like you. I am assigned to our 586th Fighter Interceptor Squadron, a unit of our V-VS, what you would call the “Air Force.” And Vasily and I have had another adventure that I must happily relate to you today. It is most exciting!

On this day, our skills would be tested greatly. You know our terrible foe, Sheikh Muqtadeh, who is greatly feared in our former republic of Georgia. We fly from our Sochi airbase against his IRLF terrorists, with the help of you Westerners. Today, we must teach the Sheikh that we are more serious still, for he has gone too far this time. Now the Turkish air force openly bases F-16s and F-5s at Sukhumi, too nearby Sochi for comfort and poaching on our brotherly Georgian territory besides! And they are placing surface-to-air missiles, the effective American improved-HAWK system, along with an early warning radar to spy on us. This is just south of the city of Gudauta, and the Georgian Su-25s based there are cowed; the HAWK now commands the south coast. This, we cannot countenance. We must act.

The West is busy in the Middle East, but even the NATO is now reaching out to us. War makes strange bedfellows, yes? The Americans send this day again the Overlord, their incomparable E-3 AWACS aircraft, to be our eyes.

The Germans now patrol the Crimean skies with their MiG-29 and F-4 fighters, and the Canadians are coming with Hornet fighters. And soon, they will send American Marines and other NATO soldiers to bolster our troops, if they can.

But Vasily and I must strike the first blow, on the ground this time. We have been given this great honor because our Cranes are the fastest birds in the sky! Yes, we fly the Sukhoi fighter, the Su-27S, what you call “Flanker.” Here, we call it “zhuravlik,” the Crane, because it is beautiful. And these Cranes have teeth. They are the “S” model, not the older air-to-air “P,” and have been type-rated for air-to-ground ordnance, rarely seen in versions older than the Su-30. The Turks do not know this. But they will find out. 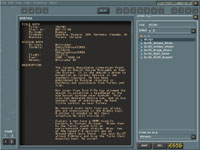 Our Commander tells us that the Turks and their IRLF dogs have set up their stolen 55G6 EWR radar and we will kill it, and the I-HAWK battery that guards it, and commands the southern skies. And then, we will land at Gudauta base, that our Georgian comrades may know that the Rodina will never forget them. We must be careful, for our agents tell us that the IRLF have the Shilka gun-tank, too. And Turkish F-5 fighters guard them as well. So we fly with the new R-77 and R-73 missiles. And our glorious Red Banner Fleet is on watch for us, the Moscow and her consort, Neustrashimy, will be nearby with Moscow’s long-range air defense battery to protect us. You call these the seagoing SA-10, the SA-N-6, and it is much better than the Turkish HAWKs. But the Turk is sneaky, and we have heard that two of their American Perry frigates are on patrol in the Black Sea. 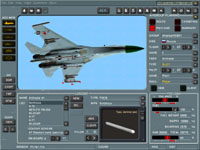 Again I have the mission planning. I tell our ordnance chief of our mission, and requisition two R-77 and two R-73 each for self defense, for both Vasily and myself. As for me, I work best in our natural interceptor role. I am most proficient beyond-visual-range, and prefer the R-27TE and R-27RE, but for mid-range combat the R-77 is best; it is similar to your Western AMRAAM, in fact, the American “Red Flag” instructors I once had the honour to train with called it, “AMRAAMski.” A testament to Vympel’s engineering, no? Against the Turks we will need their maneuverability. I leave the air to ground ordinance selection to Vasily, who flew Su-30s before coming to the 586th. He is our resident…how you say…mud-mover, yes?

“The threat is radar-guided, so we will need anti-radiation missiles, Sacha. We have the choice: X-58, X-31P, X-25MP. I advise against the X-58. It is heavy and long-ranged. Were we attacking the Turkish Navy, perhaps then. The X-31, well, we do not confront Patriots or the S-300 this day. I recommend the X-25; it is fast and light. It packs a good punch and we can carry two along with bombs. And PB-250 bombs, I think.”

“Multiple racks?”  “Da. Two of three each, from the Su-30 squadron here. We will each have six bombs and two missiles. Your HUD avionics will not recognize the combination, Sacha, but fortunately, the Su-27 is fitted with a similar armament control system as the Su-25. You are type rated for the 25, ­da?”

“Da. It will show “b” for bombs, YP.C for missiles, HPC for rockets, BNY for cannon. In the small window, on the eyebrow panel left of the pylon indicator below the HUD.”

I planned the ingress. We would take off from Sochi-Adler as before, and at low altitude use the mountainous terrain to shelter us from the HAWK radar. Sukhumi base is on the coast and we will have to make the final approach to target over water, terribly exposed. It will be low, and fast, with our missiles to cover us. Perhaps the Turk will keep his cursed radar off, then.

A LOMAC Mission Report: Turn Their HAWKs Into Scrap! Page 2

A LOMAC Mission Report: Turn Their HAWKs Into Scrap! Page 3

A LOMAC Mission Report: Turn Their HAWKs Into Scrap! Page 4

A LOMAC Mission Report: Turn Their HAWKs Into Scrap! Page 5

A LOMAC Mission Report: Turn Their HAWKs Into Scrap! Page 6

A LOMAC Mission Report: Turn Their HAWKs Into Scrap! Page 7