The answer to that question depends on many things, but let’s just focus on some things that depend more on the nature of the modeling in the simulation than on the BFM requirements of the engagement. In many simulations, the pilot physiology model that controls how and to what extent black outs occur, have an influence on this. There is an old saying in air combat, “Lose sight, lose the fight” and so most flight sim’ pilots will only pull back far enough on the stick to avoid blacking out. Many simulations also model the effects caused by how rapidly G onset occurs, and that isn’t just about how far you pull the stick back, but how quickly you pull it back, with the possibility of overshooting into brief excursions of excessive load factors. So those considerations place an upper limit on the speed and extent that a wise pilot will move his stick, but that only applies when the aircraft is above corner velocity and thus fast enough to generate high G forces. The snag is that inexperienced flight sim’ pilots, excited by the prospect of a hard turning engagement, and uninhibited by a lack of physical discomfort that would normally be associated with a hard turn in a real aircraft, find it difficult to control the urge to simply pull the stick back as rapidly and as far as it will go. They figure that the harder they pull on the stick, the faster the aircraft will turn. It takes a lot of experience and confidence to have the self control required to ease the aircraft into the turn and increase the load gradually to the edge of the envelope. The big question is of course, since flight sim’ pilots don’t actually suffer any physical discomfort in a turn, is there any point in holding back? Why not just get to the edge of the envelope as quickly as possible and stay there for as long as possible? Also, we all know that many WVR fights end up getting slow, so what happens when the aircraft is below corner velocity, where lower G forces aren’t such an issue, what happens then? Why not just pull that stick back as far as it will go, as fast as you can get it there and hold it there for as long as possible? That is commonly known as using G for brains and in some situations, and in some simulations that is exactly what you should do, but why?

Simply because the problem is well known, and it has been solved for some pilots in the design of their aircraft. For example, F-16 drivers, don’t have to move the stick very far at all, control commands are obtained from the force applied to the stick, rather than its movement, and the response is computerized so that sudden and large control forces commanding pitch or roll motion are interpreted and suitably damped into acceptable pitch rates so that angle of attack and load factor overshoots are prevented. The control laws that are hard coded into the software of the fly by wire system solves the problem for you, and can easily make an average pilot good, the snag is it can also make a great pilot good.

The Falcon4 simulation did a fine job of modeling the F-16, including its fly by wire system. Those of you who are familiar with that simulation will have enjoyed the benefit of the F-16s control laws, and will have been given the ability to haul your flight control stick back as hard and as fast as you wanted, confident in the knowledge that the consequences of flight envelope excursions, departures, damage to the aircraft or the pilot, or rapid energy loss, would either not happen, or be within tolerable limits.

Just to press that point home, let’s take a look at the energy maneuverability diagram for the F-16 as modeled in Falcon4’s SP3 and to make it interesting, let’s overlay it with the diagram for the MiG-29 as shown in Figure One below. Notice that for the F-16 the sustained turn curve (Ps = 0 curve) actually rises continually to the left, so that the sustained turn rate increases as the aircraft gets slower. In that situation, as you pull back harder on the stick, not only will your speed decrease, but your turn radius will decrease, and your turn rate will increase… So, it is clear that you should ideally pull back hard on the stick and keep it there! 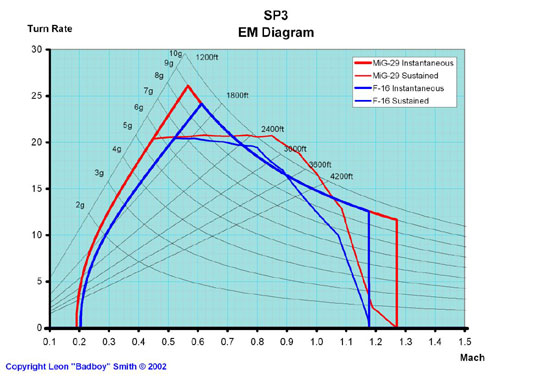