A similar situation can arise in simulations as a result of the combined drag and thrust model that results in a Ps = 0 curve that also rises as speed drops. An example of an overlay for the Eurofighter and MiG-29 from the Eurofighter Typhoon simulation is shown in Figure Two. Notice again that the sustained turn rate actually increases as the speed of the aircraft drops, so holding full aft stick and allowing the speed to decay actually improves your sustained turn rate and decreases your turn radius, a similar situation to Falcon4, but for different reasons. In Falcon4 it was due to the Angle of Attack limitations imposed by the control system modeling, and in Eurofighter, and many other simulations it is due to a combination of the thrust and drag model. However, neither is true in LOMAC, G for brains won’t work!! 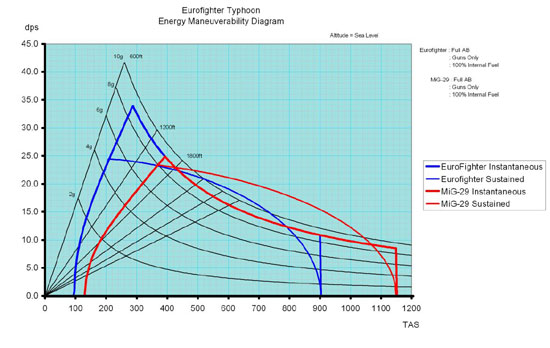 As an aside, notice that the Ps curves in the Falcon3 EM diagram are slightly bumpy, while those in Eurofighter are smooth, the reason for this is that Falcon4 uses a table based model where thrust and drag data exists in tabular format, the steps between discrete values in the tables and the fact that software uses linear interpolation to determine intermediate values, is what causes those bumps. In the Eurofighter flight model the thrust and drag values are calculated continuously and so the curves are smooth. There are advantages and disadvantages to both modeling methods, but a discussion of the merits of each would probably be a better topic for another article.

So, some simulations reward the use of G for brains, others won’t, and LOMAC is one of the ones that don’t. The difference lies in the flight model, in some simulations it is due to the way that thrust and drag are modeled, and in others due to the way the control system has been modeled. In order to understand this situation a little better, we need to look more closely at the slower end of the envelope, that is for speeds below corner velocity where we need to look at what happens as aircraft approach their Angle of Attack (AoA) or lift limits. Continuing then with the example of the F-16 and the MiG-29, the F-16’s AoA limit is around 25° (It is worth noting that the characteristics of the F-15’s control system is similar to that of the MiG-29 according to a test pilot who has flown both types) while the MiG-29 can safely exceed a 30° limit, providing no roll commands are given. 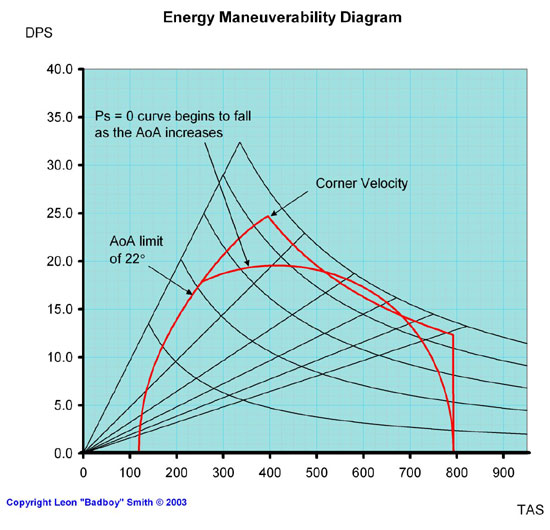 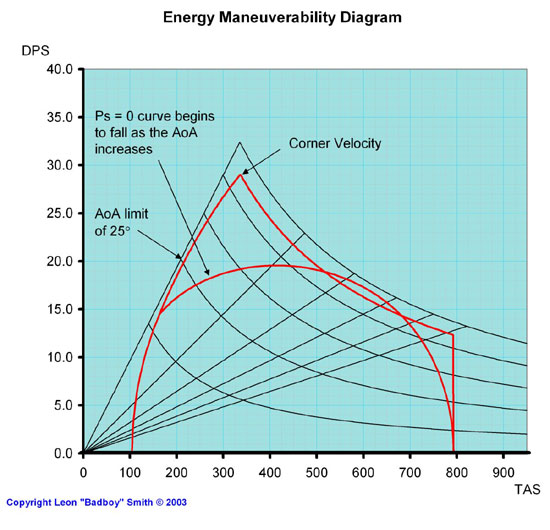