Now examine the diagram for a 30° AoA limit shown in Figure Five and you notice that the aircraft will bleed all the way down to a zero sustained turn rate. By now it should be obvious that pulling all the way back on the stick is very undesirable. The harder you pull back on the stick, the slower you will end up turning. Now temper that thought with the idea that in aircraft like the F-15 and MiG-29 there are actually no hard AoA limits imposed by the control system, if you pull back hard enough and fast enough you may well have the control power to generate high pitch rates and exceed safe AoA limits, with the associated risk of rapid energy loss or departure.

The real penalty for being heavy handed with the flight control stick is that at lower speeds, the sustained turn rate drops significantly… The simple fact is that restraint can pay off, because your best sustained turn rate occurs at a lower G value than you can actually achieve. One of those situations where less is more. The fact that this is counter intuitive, and because it is very difficult to exercise the self control required in the heat of combat, is what makes it difficult to do. It is also why the idea is lost to so many virtual pilots, and why those who understand, seem to win their online engagements more easily, and have less trouble against the AI offline. That’s where practice and experience can help. So how do you use this knowledge in combat? 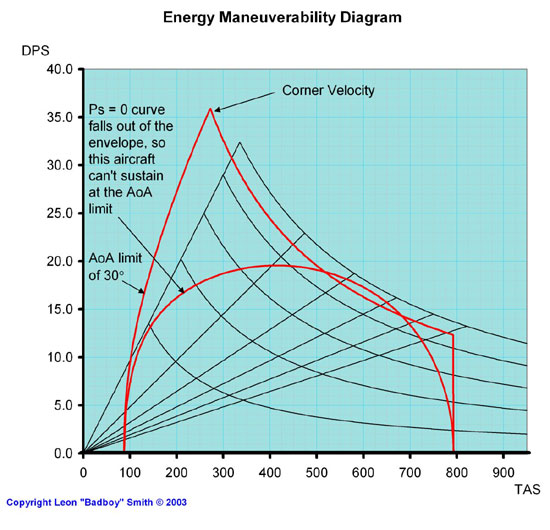 The last question then, suppose you just can’t sustain corner velocity, and you end up flying at a maximum AoA sustained turn, that is right on the edge of the envelope? For the four fighters previously discussed, the turn rate and turn radius in that situation is shown inFigure Six below, each aircraft turning in full afterburner. 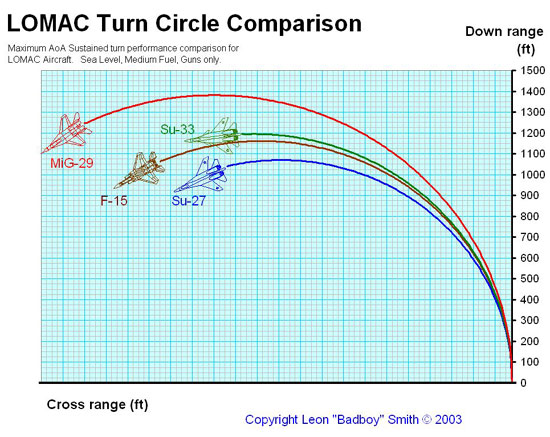 Energy Management: Picking The Right Airplane For The Job