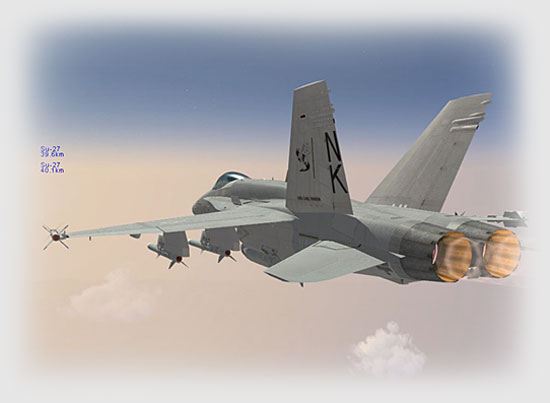 Let’s take a look at the mechanics of a BVR engagement. As we know you have to have an operating radar and the weapons to effect an engagement outside of visual range. A lot will depend on the ROE as I stated, but let us assume we have a hot shooting war, and well defined battle lines and airspace. For simplicity’s sake we will only go 1V1 against a third or fourth generation fighter. It has to be assumed that the opponent has full weapons capability and we must treat him as lethal. A lot of things can be surmised by who we fight and where we do it. You will likely know what type weapons and how good (or not good) your opponent is in the real world. Intel is not always correct, so assume the worst!

The first part of a BVR engagement involves detection. Once detected, we resolve the targets ID. With a positive ID we employ weapons in such a manner as to kill without getting killed. Our goal is to utilize our BVR capabilities to kill the enemy before we have to enter the classic “furball” once inside the visual arena. If we manage to screw up bad enough and have the enemy in close, we have done something very wrong. Your last ditch engagement is one with IR missiles and guns. You really do not want to be in this position. Fighting in a phone booth is a good way to get you and your wingman killed. If you get into a high G turning fight, historically you don’t last very long. You highlight yourself with afterburners and missile shots. The life expectancy in a knife fight in hostile airspace is something like 30 – 40 seconds. It’s a big waste of taxpayer dollars too! We want to take advantage of our technological superiority and kill bandits at long range. We don’t want the bad guy to even know what hit him. We have this capability, but it takes training and discipline to make it work. There are things to consider during each phase of the process. Success will depend on the ability to understand some basics about geometry, radar, and missile capability. For ease of explanation we will look at three phases of a successful BVR air-to-air engagement. 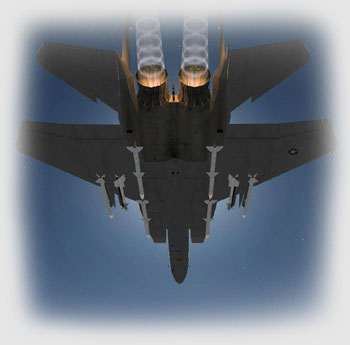 Depending on the mission, there are many ways to detect a potential target. It could be as simple as a dot on your scope, or as complicated as a data linked target on you’re situation displays provided by ground or airborne assets hundreds of miles away. Utilizing the radar to find and track a target routinely is only done with a lot of practice. A pilot has to be extremely proficient in the expert use of the radar and all its capabilities. Proper employment of the radar will yield a picture of the enemy threat. Targeting is done by the individual flight, based on threat assessment or by AWACS or ground controlled radar. First and foremost is how do we go about employing a weapon to kill this target without getting killed ourselves. There are a lot of unknowns in air combat. Many times a pilot must give his best guess using experience and the assets available to make decisions about how its going. No matter how it’s done, at some point you have to use your radar to get some info on the potential target. Doing this may alert the enemy and it may not, but it’s a chance you must take. Radar warning gear will tell you if you are being probed or locked. The bad guy may have this information also. Once we use our radar to get this information we must assume the foe is alerted. Initial detection should build a picture of what is going on. IFF and communication with AWACS or data link will confirm whether or not our “bogey” is hostile. Once we determine an intercept is desired, we set up geometry to enable our weapons to be employed as fast as possible.

Once the decision has been made to destroy the target, we move into the prosecution phase. A lot will depend on the range at detection and the target actions. What kind of aircraft is it? What type weapons is he carrying? All good questions and the fighter must assume the worst and plan on it. Two things we can do to improve our odds are climbing and accelerating. Climbing to a higher altitude will allow our missile to fly farther. Utilizing kinetic energy (missile flying downhill) and thinner colder atmosphere will allow our missile its maximum range capability. Range will vary dramatically as we change altitudes. A missile capable of a 40-mile kill at high altitudes may be hard pressed to make it to 20 miles at lower altitudes. 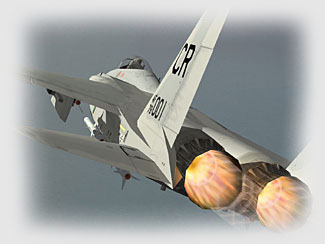 Accelerating gives our missile that much more kinetic energy at the start of its flight enhancing its range. It’s not a lot, but you want everything you can get. At some point it will become evident to the opponent that they are being prosecuted. There are three possible scenarios. First (and most desirable) our foe continues on with no apparent action to counter our moves. Second, he turns and runs away! This may be just fine, as we will have denied the enemy the use of that airspace at that time. This may even be our mission and doing so without firing a shot is optimum. Third, he points his nose at us and turns on his high powered radar to lock us up! Lets take a look at each one and how we might handle it.

If the target runs away, we prosecute until we have successfully denied enemy use of the airspace for however long we need to. Mission accomplished. We remain on station until we need to do it again or we get relieved. In the situation where no response is noted, we press into a shot, or make him run prior to that. If you get to weapon release without a response, you will likely win the engagement barring any unfortunate failures. Unless your opponent is really lucky, he will die before he can get a missile in the air at you. Most kills even in the visual arena occur in this fashion with the foe not knowing what hit them. Our third choice becomes a much stickier wicket. If you can’t get away with surprise and you have the SA (situational awareness) to continue to a missile shot, expect that your opponent will too. Your radar warning gear should be turned on and jamming used as conditions and equipment permit. You will likely expect the same thing to be used against you.

For most of our scenarios (especially with LOMAC) you can expect the Russian aircraft will get a shot off first. Most of the ranges for these weapons are greater than western types and an experienced opponent will use this advantage. At this point our prosecution phase has usually wound up with the two fighters nose on to each other and accelerating. Having an idea about when a foe can fire will help determine what you do in the final phases of an engagement. While the miles count down we monitor our displays and shoot our first missile at maximum range. At this point we then do a very high G turn to the left or right to put the radar target at the edge of our scope. We call this a crank, or check turn. This immediately causes the opponent’s missile to have to fly farther while our missile heads straight at him. This is also called an “F-pole” maneuver. If you’re lucky, and there is no missile headed at you, you have a big advantage. He most likely now knows a missile is headed his way and must do something to avoid taking it in the face. He will have to jink hard and employ countermeasures to shake your missile. Its likely he will be successful as at maximum range your missile won’t have a lot of maneuvering capability left to stay with him. It’s important to understand how missiles work at this point. Just because you get a “shoot” cue at max range, doesn’t mean your going to kill your opponent. All a shoot cue means is the missile can make the range to hit the target if NOTHING changes. If the target jinks or maneuvers the missile has to also make the intercept. 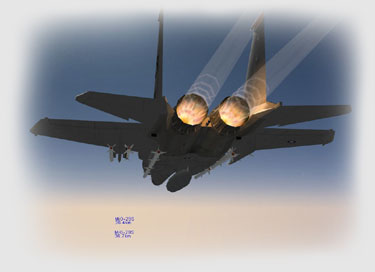 This maneuvering uses energy and reduces its available G at intercept and reduces its range at the same time. The aircraft getting the first shot has a big advantage for obvious reasons. A missile has a motor that burns very quickly and then stops very soon after launch. Once the acceleration phase ends the missile is coasting to the target. The farther out it is, the slower it will be when it reaches the target. There is nothing wrong with using two missiles to kill an opponent. It’s a good technique to use against an opponent that has a longer-range weapon. Disciplined pilots will hold a missile inside of max range as the closer you get the higher the odds of a kill go up. Its called P sub K or probability of kill. Closer shots yield higher energy/available G at intercept. Throwing a missile out at max range will cause an opponent to take his nose off of you and destroy his energy state trying to defeat your incoming missile. He may even lose radar contact with you. We term this “wasted” missile a “spoiler” meaning it is likely not going to hit, but it forces the bogey to react and defend against it as I mentioned above. It “spoils” his game plan.

A LOMAC Mission Report: Quit Toying With Him, Sacha! Page 4