I have had the chance to fly several versions of LOMAC prior to the Gold Release version. So far I have been really impressed with the BVR combat modeled in the sim. The software versions used are all pre-gold release candidates, so some features had not been implemented yet and I am sure some things may change with the final boxed version. A lot of what I know of real world ACM and BVR combat applies in this simulation. I have to say its rather daunting to go against most of the more capable Russian aircraft in this sim. Using the F-15C you are most of the time at a disadvantage in the BVR arena.

The F-15C radar is very capable and you can play in full realism mode or just use the arcade mode. The arcade mode is pretty easy to use and interpret. I know a lot of folks will balk at this but here is my take on the “arcade” mode. It’s definitely a “fun” mode, but I submit that with current day hardware and tactics it’s actually not too far from what real F-15C pilot would actually use. The ability to data link targets and provide the same kind of display you see in “arcade’ mode to real world pilots is very similar. I know the purists in the crowd will fall off their chairs on this one, but trust me, I think the displays in the real aircraft are actually EASIER than this. Yeah, no kidding! Can you say JTID’s? Link 16? I know that you can! Just pick up a copy of Aviation Week and Space Technology and read it. You will see what I mean. The west has aHUGE advantage in the ability to find targets, track them, and prosecute them. I don’t think anyone else can even begin to approach this capability at present. It gives the U.S. and some other western countries a large advantage in the air-to-air arena. Knowing where a target is, your wingman, and other flights both hostile and friendly is a definite plus. Being able to data link this info securely and use it to sneak up on bad guys without even turning radar on is a giant advantage. 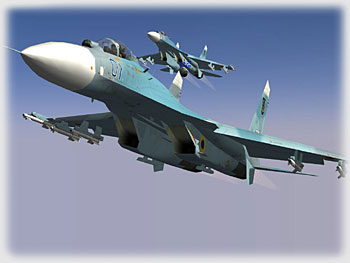 One of the things I did a lot of in the sim was air-to-air engagements at long range. For the most part I was really impressed. I spent plenty of time watching my burning jet flutter to the ground as Su-27’s and 33’s danced happily by. I did get my share of kills though. On lower AI settings, the AI is definitely reluctant to shoot until very close. This allowed me to usually employ missiles first. The targets appropriately attempted to defeat my incoming missiles and did this very routinely, but they usually soaked up my second missile as they pitched back into the fight around 10 miles or so. Now push the AI slider a bit higher and hold on to your hat boys! Once you go above the “Good” setting, the AI gets tough. On Excellent they will give you fits and you are going to be really challenged. When it comes down to the visual arena, things are really good also. Going 1V1 guns is really rewarding, just like past Flanker simulations. This is probably some of the better dog fighting I have experienced in a sim in quite a while.

One thing I noticed about the BVR engagements was the fact that the AI seems to know on every engagement exactly when I fire at them. The reaction is immediate and they do appropriate defensive maneuvers for the incoming missile. They are very successful usually — and this makes it really fun — and you must stay on your toes. You can use this to your advantage though. As I said previously, when the target goes defensive they are likely not shooting at you, so if you’re feeling intimidated, let a missile go even outside of max range. The bogey will go defensive and give you a chance to even out the engagement by letting you in closer. I saw this almost every time on the higher AI settings. Overall the sim is outstanding and the radar modeling and AI are top notch. 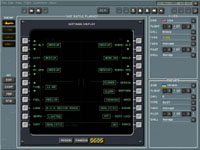 On the topic of the radar, it appears this sim is going to be very similar to Jane’s F-18 when it comes to using the radar well. You will really need to PRACTICE this. It’s an art and requires a good knowledge of how and why radar works. On the full realism settings the radar is tough to use. That’s the way it is in real life too. It’s not magic and a lot of the fun comes with practicing in the sim. There are plenty of ways to get the practice too. I highly recommend the Fast Battle Planner to lay out lots of targets and just go to town with the different radar modes to get good at it. It’s a pretty steep learning curve, but it’s definitely a rewarding one.

The fun part about all of this is we have a new flight sim that allows the actual use of these tactics. LOMAC gives one a great appreciation for the complexity of air combat. An appreciation of BVR combat can be gained by learning to use all of these tools in such a high fidelity simulation. LOMAC does a good job in the BVR arena and you will get plenty of chances to kill beyond visual range. For more discussion join me in the LOMAC Forum and other Forums here at SimHQ. I love talking about this stuff!

This is the computer used in this article:

A LOMAC Mission Report: On Wings of Eagles Page 4

A LOMAC Mission Report: Quit Toying With Him, Sacha! Page 4