Training Missions and a Closer Look at the Aircraft
(continued) 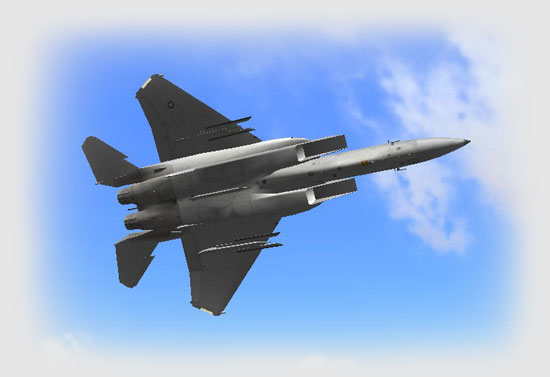 The second American aircraft has not a pound for air to ground, and it is the all-American fighting Eagle, the clean, well-polished boy-next-door of combat aviation. This version features the AN/APG-63 (V1) radar. Purists may scream that the present Eagle is more advanced, but again, this team is going for what it can model in the most detail and the V1 radar has the most declassified features. You won’t be disappointed. Here is where the rubber meets the road, and it is without a doubt the very best modeled air-to-air radar of the current generation. Only Falcon 4.0 SuperPak 3’s AN/APG-68 is in its class, and the APG-63 of our simulated F-15 outstrips it mightily in my opinion.

LOMAC only left out one radar mode: the vector-search head-on mode. This is only used for high-aspect interceptions involving targets from long range closing at high speed and most simmers don’t use it. I miss it because most of my air-to-air flying is done BVR, but the range-while-scan (RWS) mode substitutes just fine for most purposes. RWS and track-while-scan (TWS) modes are selectable with the punch of the Alt-I key combo. 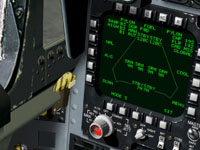 The target-designator cursors (TDC) are slewable and with them the system can be bumped-up or bumped-down for range settings identically with the operation of the APG-68 in Falcon, by moving the TDC to top or bottom of the display. The system will independently track up to I believe eight or ten, I’m not sure which, targets for independent AMRAAM firing, one right after the other, and you can designate your primary and secondary targets. After that, the system will prioritize them for you as you engage them. I’ve never done more than four; that’s why I’m unsure of the max number. I have taken on four MiG-23 aircraft in this manner and downed all four, alone and unsupported. All HUD cues are there and displayed in a manner similarly to the APG-70 modeled in Jane’s F-15. LOMAC’s F-15 has home-on-jam capability for both AIM-7M and AIM-120B and C missiles. Automatic lockon modes of Vertical Scan and Boresight are present and working for Sidewinder or Sparrow cueing of within-visual-range targets. Further, the Visual AIM-120 mode, allowing a launch with onboard missile-radar guidance, and the Flood AIM-7 snapshot modes, are both in-game and actually work rather well. The radar also features non-cooperative target recognition (NCTR) and identification-friend-or-foe (IFF) abilities for locked targets.

The Tactical Electronic Warning System is present, but I don’t think it is fully operational. I have not been able to discover a way to program chaff/flare release modes. Automatic countermeasures are supposed to be a part of the actual TEWS system. The F-15 does have onboard ECM that is enabled by the pilot and controlled by the TEWS, as the pod in the A-10 works. The TEWS in LOMAC is very reminiscent of that in Jane’s F-15. Its symbology is identical. You can, however, set your display to three levels to show only targets in the threat zone who are locked on you, or ones who have launched on you. The A-10’s RWR can be set likewise. Still, I would have liked to see even more detail here, for the F-15 at least. The TEWS should be able to program chaff and flare releases for a dedicated air-superiority aircraft.

As in the A-10, the flight model feels stable and secure. It doesn’t feel artificial at all, like Falcon’s FM often does to me. It is more reminiscent of IL-2’s “feeling of flight” than anything I’ve flown. I get good feedback and though one can stall the aircraft one has to abuse it to do so. This is common with modern combat aircraft, and realistic for the type.