There are three main features of the bombing display… the flight path marker, the bomb fall line, and the bombing pipper.

The TVV shows the point that your flight path is aimed at. This marker is also known as the flight path marker. If the TVV were pointed at the ground, that is where you would hit if you did not pull out. The TVV has nothing to do with the bomb… it strictly deals with the airplane. You can also think of the TVV as your roll axis, especially in one g flight. If you were to push the flight stick sideways, you would tend to see the airplane rotate around the TVV. 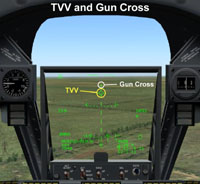 The PBIL is also known as the “bomb fall line”. When freefall bombs are released, they follow the flight path of the aircraft. When they hit the ground, they are still on that flight path (there is an exception for retarded (high drag) weapons that may be affected by winds during their fall… but that is beyond the scope of this article). As the aircraft flys along, you can imagine a line on the ground that represents the path of the aircraft. That line is what the bomb fall line in the CCIP HUD display represents. Ideally, the line shows the potential impact point for weapons released under the existing conditions of speed, flight path angle, and release altitude.

The PBIL will appear as a dashed line when the CCIP pipper is out of the HUD field of view (FOV). Once the CCIP is within the HUD FOV, the PBIL will change to a solid line. 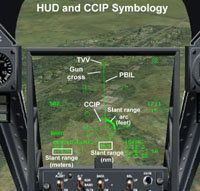 The PBIL does not tell you when to release the bomb… it’s only an indication of a future flight path, assuming your flight conditions do not change. What is needed is a symbol that says “if you drop the bomb NOW this is where it will land”. That symbol is the CCIP bombing reticle and its center pipper.

The CCIP reticle in LOMAC is the same as the gun and rocket reticle and has three parts… the reticle, a range analog bar, and a pipper. The reticle is about double the size of the Maverick reticle and has a range analog bar that extends around the inside of the reticle diameter from about the 11 o’clock position counter-clockwise to the 12 o’clock position. This range bar remains at the max range position of about 15,000’ (11 o’clock) until the slant range decreases below that value. The slant range shown in the CCIP reticle analog bar is the distance from your aircraft to the point on the ground under the reticle pipper. 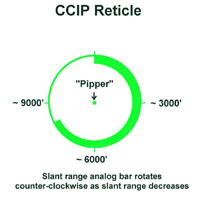 The pipper is the dot in the center of the reticle. Common usage often has the term “pipper” used to describe the entire reticle display… one has to be careful how that term is used. Putting the “pipper on the target” may mean more than one thing… no problem! Just be sure what you mean when you use the word “pipper”!

The CCIP function is intended to allow the pilot a little leeway in meeting airspeed, dive angle, and release altitude parameters. It is not necessarily intended to let the pilot fly willy-nilly anyway he wants when on an attack run. The system works best when you make an attempt to fly a planned delivery… if you are off a little here and there, the system corrects for these minor errors. The question then becomes one of what parameters should you attempt to meet. I’m going to go with real world data here and recommend the bombing parameters that we used in the Hog when I flew it in Europe. Below right is a chart that summarizes the parameters.

I’m putting these settings and parameters here for those that want to do it “by the book”. Hit these dive angles and release altitudes and you won’t have any problems with frag patterns or fuzing… although I’m not sure fuzing is an issue in LOMAC. For example, the Rockeye seems to always function at the same height above ground regardless of how high you were when you dropped it.

From the parameters, you can see that the data assumes a roll in either from a conventional base leg (low threat tactics) or a pop-up (high threat tactics). In either case, the release portion of the pass begins with you with your nose pointed in the direction of the target. This is where the next section will begin.