We are now in the final stage of the pass prior to release. We’ve set our AOP-target-CCIP ratio, and we’re now “coming down the chute”. Your work is not yet done… you have several things to watch. One is AOP placement, one is your airspeed, and the last is the effect of winds.

It is important that you maintain a constant AOP. Once you have your sight picture ratio set, look at where the AOP is on the ground. The TVV is your AOP reference. As you continue the dive, work hard at keeping the TVV on that spot. The TVV may move laterally or vertically (typically up). Lateral movement is usually the result of changing crosswinds or a rudder that is out of trim. Vertical movement is usually the result of changing pitch trim.

Rudder trim is very important… do a trim check as part of your fence check… trim the rudder neutral at your desired release speed.

Changing crosswinds can cause the PBIL to move left or right of the original line. You correct for this by turning away from the movement… if the PBIL moves left, make a shallow right hand bank to bring it back to the desired line. It may so happen that you have to maintain the bank right up to the release point. This is OK… the computer can hack a banked attitude as long as the bank angle is relatively constant (no abrupt changes just prior to release). As long as you can see the CCIP (the PBIL is a solid line), you have a valid release solution. 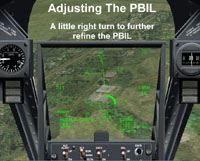 Here I am “fine tuning the PBIL by using a slight bank to drift the PBIL over to the center of the target building.

Airspeed control is also important. A changing airspeed is a parameter that the release computer must contend with. The less the airspeed changes, the better the release calculation becomes. Airspeed determines your altitude lost in the pullout… too much and you pull out lower than desired. Finally, changes in airspeed affect trim. Most pilots do not trim in the dive, and the result is that increases in speed may cause a slight nose rise that takes your TVV away from your AOP. Avoid this by throttling back once the dive is established to about a mid-range power setting (low to medium dive angles) and idle for medium to steep dive angles.

We’ve throttled back, held a constant AOP, and killed any drift… all we have to now is wait for the CCIP to reach the target. Yup, folks… it’s about as easy as that. Hold that AOP constant, control your speed, and keep the PBIL running through the target is the hard part of the final. Pickling is the easy part!

But a note of caution. Don’t get too eager! Wait for the CCIP to move up to the target. Many a pilot has accelerated this by inadvertently increasing his backpressure on the flight stick. Not good! This imparts another parameter for the release computer to deal with… at a time when you want everything to be as smooth as glass. 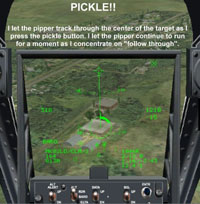 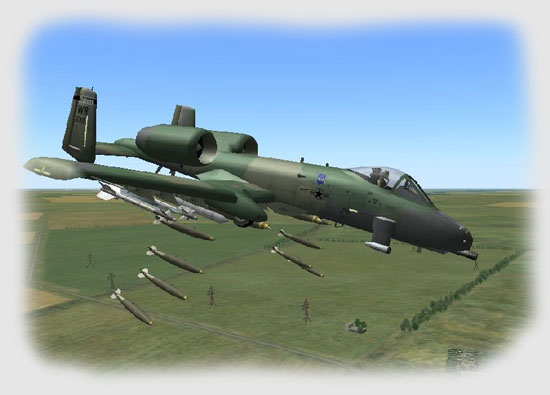 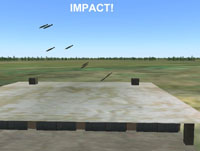 In my last article, I mentioned the “track-shoot-track” technique when strafing. The same is true in bombing. The idea is to pickle as the CCIP moves through the target while holding that pitch attitude. Don’t “snatch” the stick back at release… instead, ”follow through” for a half second or so to ensure a smooth release. Those of you who like to shoot skeet and trap will know what I mean.