The last thing I want to mention is a way to deal with moving targets. While the CCIP may seem to be “magic” sometimes, it still doesn’t know that there is a target down there! It’s telling you that if you pickle now, the bomb will land at a certain spot. Whether there is a target there or not is your problem… not the computer’s!!

In the game, we can go after moving convoys… and depending on what type of vehicle is in the convoy, the convoy can move along fast enough to make aiming a problem. There are three factors that we have to consider… the speed of the convoy, the attack axis, and the time of fall of the weapon.

Vehicles like BMPs roll along at a good clip. Trucks are less speedy, and tanks may be the slowest. Try to know what your target type is ahead of time. This way you will be prepared to adjust your aim if and when the time comes.

Your attack axis is the angle that your flight path crosses the convoy. For moving convoys, a 90-degree axis results in the greatest sense of apparent target lateral movement (speed). If you are perfectly aligned with the convoy, you have a zero degree axis… but if the convoy is coming at you, its forward speed may present aiming problems. Finally, weapon type is an important consideration. CBUs are a better area weapon than a low drag bomb… for this reason, I suggest you ripple bombs when attacking convoy targets that are moving.

If the threat level is reduced, you may want consider aligning your attack axis with the convoy… this works well with CBU weapons due to their wider “footprint” (more leeway in lateral miss errors). Attack from the rear if possible.

In a high threat environment when your aiming time is short, plan an attack axis that crosses the convoy at an angle of 30 to 45 degrees. Try to attack from the rear to minimize the effect of convoy forward speed.

Your altitude at release affects the bomb’s time of fall (TOF). During that time of fall, the convoy is moving… longer TOFs can cause greater miss distances. For that reason, I suggest an adjustment to the initial sight picture that places the CCIP a little further down from the target. Instead of the 50-50 ratio (AOP-target-CCIP), use maybe a 33-67 ratio. This results in a slightly lower release altitude… and therefore shorter TOF. But don’t overdue it… remember the words about getting too low!

A curvilinear flight path is one flown in a bank… a descending, turning flight path where the pipper and target come together only at the end. This technique can be useful if you find yourself faced with a large attack axis angle against a moving target. The idea of the technique is to aim in front initially and then slow target apparent movement down by turning in the direction of target movement.

Remember, as long as you can see the CCIP and the PBIL is solid (not dashed), you have a valid release solution. 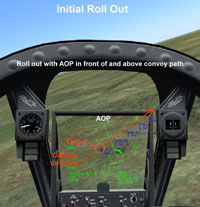 Once you have set the aiming ratio, maintain your attitude and let the target move towards the PBIL. Look at the CCIP reticle. Note the distance from the pipper in the middle to the reticle itself. That is the distance that you want to lead the target with. 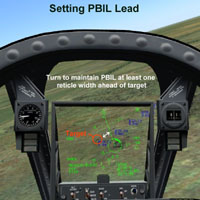 As the target approaches the PBIL, roll into a shallow turn in the direction of target movement. Vary your bank angle to hold the target away from the PBIL by the ½ reticle diameter that just described. If necessary, increase your bank to keep the target from closing on the PBIL. 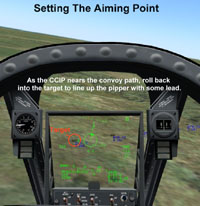 Maintain your banked attitude and your ½ reticle lead point… let the CCIP move up the PBIL until it reaches a point right in front of the target’s projected movement. Now, pickle! This technique is only a starting point for attacking moving targets. The curvilinear approach works well but lead points vary with attack axis, target speed, and weapon type. Use this technique to build yourself an “eye” for the proper lead point.