Q. Can you describe how the Online Campaign Generator will work? Is it used strictly with dedicated servers?

A. The Online Campaign generator is actually a pretty different type of thing compared to the offline generator. Offline missions are created with only one player in mind, and the waypoints and objectives created for other flights will often to be appropriate for a human player. That’s why we use a completely different set of algorithms when creating online missions.

Each side (Allied/Axis) in an online mission is split into at least two sub-groups: strike and defend. The Strike group is given an enemy target to attack. The Defend group is sent against the enemy’s Strike group. There may also be an Escort group, which is sent to help the Strike group. So, in any online mission you will have anywhere from four to six different groups in the air with their own unique objectives.

The actual situation in the mission is determined by the campaign flow. The server will have the choice of historical progression, in which case the balance of power and the front line movements will progress based on preset logic. Alternatively the server may choose to make the player’s actions influence the campaign, in which case the front line movements, number of available planes, locations and strength of ground and sea units, and many other parameters will be determined by the cumulative performance of all players in each consecutive mission.

The online campaign generator will work on a regular online server, i.e. the one you start from within the regular IL-2: Forgotten Battles interface. In other words, the server creator will be able to fly the online campaign missions as well.

Q. What kind of stats will be recorded with the new Online Campaign Generator?

A. The following information is stored on the campaign server for every pilot that’s ever played there: player’s rank, number of sorties flown, destroyed ground targets, destroyed air targets, number of times he/she was killed (for non-dead is dead campaigns), and points. The points are awarded for every kill, successful mission flown and successful landing. All of this information is displayed by the server before every mission flown. 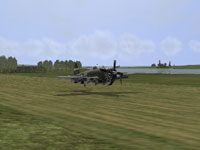 Q. How will the online dynamic campaign differ from the one that is coming up in the Aces addition?

A. The online campaigns in the two products will differ in the same way as the offline campaigns. With Battle Over Europe you will be able to fly for USAAF and Luftwaffe over Western Europe, while in the Ace Expansion Pack you will fly for the Soviet Air Force and several Axis countries opposing it on the Eastern Front. I think the difference in theaters, planes and historical briefings will be enough to make the two products differ, and at the same time compliment each other.

Q. Will there be compatibility issues online between players with BoE and those without?

A. No. BoE simply adds new features to the campaign engine, while the core IL-2:FB functionality remains the same. BoE users will have no problems connecting to non-BoE dogfight and co-op servers, and vice versa.