The AI in this sim is breathtaking and has become even more so as several experienced users report that “UFO-type” maneuvers performed by some of the AI planes previously are now a thing of the past. The AI controlled planes move and maneuver like real planes with real pilots.

Noting the comments of pilots that are more experienced than I am, I understand that the flight model which was already regarded as being of the highest caliber has even been further improved upon. I believe the Spitfire has especially received some extra attention in this area.

The pyrotechnics can now be switched between realistic, based on military specifications concerning amongst other things the amounts of explosives, incurred damage on airframes and Hollywood style spectaculars. 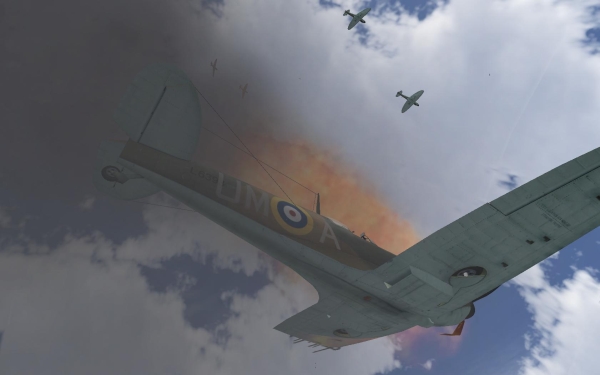 The sounds are quite literally incredible when you fly into battle with the ack-ack, the engines roaring, the guns and tracers, and if you have the right kind of sound set up with multiple speakers around you, you can hear where the aircraft is positioned in space in relation to your own plane. Even the tracers that hit your machine with a gut-wrenching “zing!” or “clunk!” seem to announce themselves from some distance away before they finally hit you.

One minor thing which has been broken apparently by the 2.06 update is the fly-by sound. As you press F9 the view shifts to a flyby view and one of the many thrills in BoB2 is to enjoy the sound of the Rolls Royce Merlin as the aircraft approaches you. Or rather, it was. Doubtlessly it will be fixed again and a quick work-around for now is to rename the file called “externalview.cfg” (located in the root folder) to “old_ externalview.cfg”.

Battle of Britain II: Wings of Victory is a single player experience only, but what an experience! If multiplayer will ever be added is anyone’s guess. Not for lack of the wishes from the developers who I believe would very much like to include it, but for lack of access to experienced multiplayer coders.

If you experienced stability issues with the original BoB2 release, you should definitely download the 2.06 update and apply this to your copy of the sim, as the cumulative fixes from earlier updates are included in 2.06 and the stability is now extremely good for most users.

Should you still experience some issues, please take the time to post about them in our Battle of Britain II Forumas the developers regularly check for user feedback and are very interested in listening to you. Suggesting fixes and investigating very thoroughly the possible causes for any problems that might arise. I cannot think of any developer except Shockwave engaging in such a sustained, positive and constructive relationship with its end users. They offer absolutely world class support.

Some of the ongoing development work depends on the contributions of volunteer modders, but stand-alone mods also exist and one of the recent and most praised stand-alone mods is the summer terrain started by “Cellinski” and completed by “Bader”. It is easy to load and unload with the terrific utility JSGME. 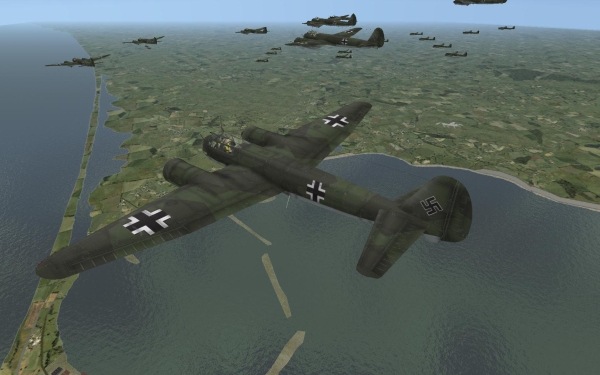 Another interesting and very recent development is the use of the saved game feature. It compliments the more traditional mission builder by creating and sharing dynamic “mini-campaigns” as detailed in this thread which covers the missions flown by historical aces.