This is the stuff of many a Flight Modeling debate, starting off with “How did XX plane catch up to me, when the statistics say my plane is faster?”

Combat responsiveness is how quickly a plane can regain lost energy, and it’s the difference between a mediocre aircraft and a stellar one.

My favorite comparison is the LaGG-3 (series 66) and the Yak-1b, which were in the skies at roughly the same time. On paper, they seem to be a tie, with little real advantages over the other: 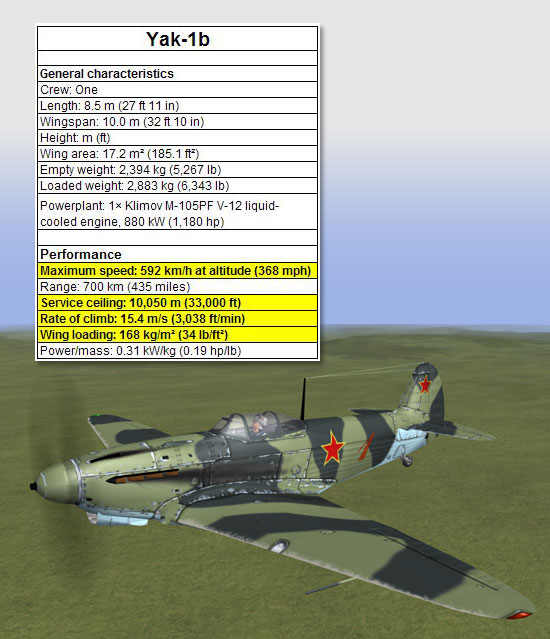 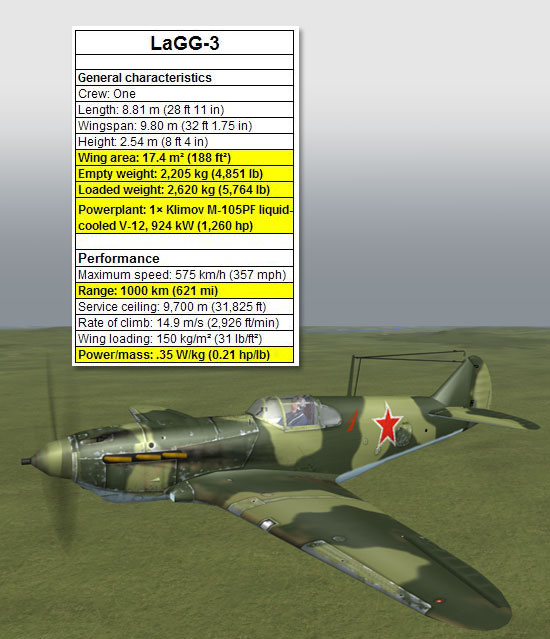 But the Yak-1b, which weighed more and had a less powerful engine, was the one that put up a fight with the Bf-109/F4, while the LaGG-3 was relegated to back line units as soon as it could be replaced due to lackluster performance.

The reason was combat responsiveness. The Yak-1b’s design made it able to accelerate much faster than the LaGG-3. Though it was heavier than the LaGG, it was also shorter and had a more efficient wing design. In practice, a LaGG was as fast as a Yak-1b (those 12 MPH at top speed can be considered plus or minus on any given aircraft), but it took much longer for the LaGG to get there. Once the LaGG reached a low energy state, it was too long to regain it with the motor it was given.

It simply was underpowered for its design, resulting in slow acceleration and a wide turning radius (which was a byproduct of this).

Once fitted with a beefy radial engine and a few modifications, the LaGG-3 came back as the LA-5, though, and redeemed itself as a premier fighter aircraft.

The ultimate example of poor responsiveness is the Me-262. It had two speeds: Really, Really Fast and Dead Meat. Its acceleration was so poor that it required active escort on takeoffs and landings as there was no way it could simply hammer the throttle and zoom away. The best performance energy band for the 262 was pretty narrow, but since it was so fast it didn’t matter in practice. One did not scramble a Me-262 in response to incoming fighters five miles off.

One of the best examples of combat responsiveness is the Bf-109/F4 and /G2; and, naturally, the Spitfires that proved to be the answer to them.

Again, understanding the combat responsiveness of one’s aircraft is key to keeping it in the optimum band of energy. In my Hurricane IIb, for example, I don’t often hammerhead or perform a great many vertical maneuvers: I perform rolling turns with either a slight climb or descent in the middle of them, as the Hurricane tends to slide in turns and lose energy.