With regards to gameplay, as I’ve mentioned multiple times, it is my opinion that EE2 is essentially the same as EECH in almost every way. For those of you that didn’t have the opportunity to play EEAH or EECH over the years EE2 will probably be a lot of fun when you realize all of the gameplay potential that exists here. Even EECH veterans, though perhaps jaded by the lack of any real improvement to how the campaign engine works, will admit that the sim is still a lot of fun and there are very few sims that can rival what EECH and EE2 try to model. For the uninitiated, EE2 basically allows you to go in and choose among a bunch of missions which are unfolding in an ever changing dynamic way. You can fly air-to-air missions, escort, attack, and recon missions among others. Some people stick to their mission and fly it as it is intended while others (like me) try to finish the mission and then go out “freelancing” for other kills. You can play it however you want. The mission planning, campaign overview, arming, and other screens in the mission editor are quite detailed and you can spend a lot of time working on a strategy to “win” the campaign. Usually you will be required to meet certain campaign objectives in order to succeed: for instance, capturing a couple enemy airbases and some factories for instance. The balance of power in the campaign can be tracked in real time as units capture and retreat from different areas of the map. There can be a bit of strategy involved in how you leapfrog across the map and much of the strategy revolves around capturing FARPs and other military bases in order to keep your flying time to and from the action to a minimum. It isn’t as difficult as chess for sure, but it is very entertaining and satisfying to successfully wage a campaign over many days of flying to accomplish your goals and win (or lose). 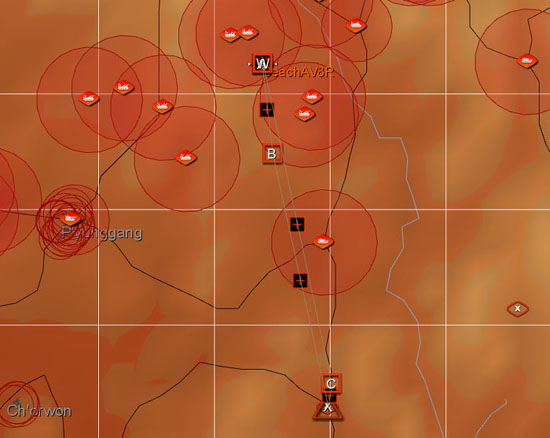 There is a LOT more to cover regarding the campaigns and missions in EE2, but it would basically be a re-hash of what has already been extensively written about EECH. I’d suggest newcomers to the EE series to dig up the old EEAH and EECH reviews to get more of a feel for the total package.

Now, I’ve raved about the updated 3D models and new textures and skins in EE2, but there are some problems with the sim that I haven’t mentioned yet. Some of them are carryovers from EECH and some are new. I’ve already mentioned the terrain height bugs and the frustrating experience of running into invisible walls (it does only happen rarely I’ll admit). Another thing I noticed right off the bat is the windshield “glare” effect that occurs when you are inside your cockpit. It is most noticeable when you roll the aircraft from side to side you get a sort of a swirling haze across your field of view that is quite annoying. I think I know what the developers were after: simulating the reflections and distortions you get when looking through an acrylic windscreen. You get used to it during the daylight missions but the effect has the added drawback of dimming your view out the window a fair bit. During dawn and dusk missions the effect is so bad that you either have to turn your night vision goggles on or use the no-cockpit external view which gets rid of the dimming and the “swirl” effect. It would be nice to be able to disable this effect in the graphics setup perhaps. Here are two comparison shots at dawn within the cockpit and with the cockpit disabled showing the brightness difference. 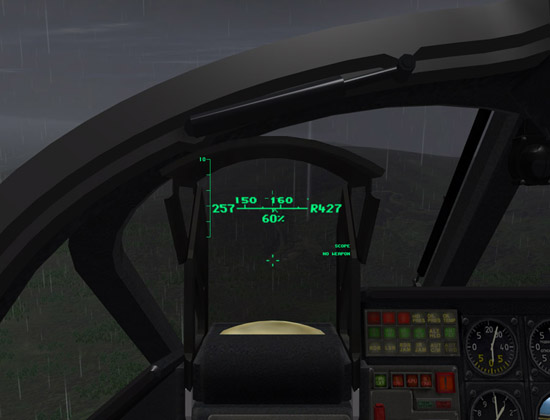 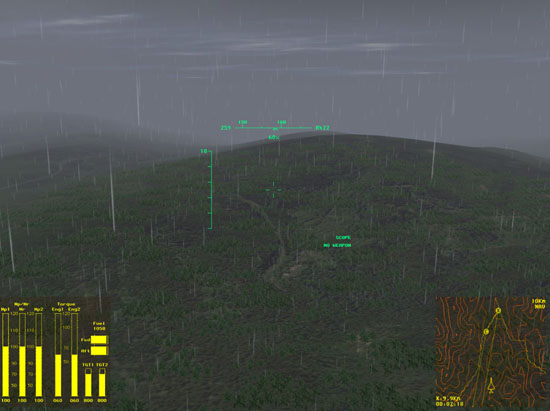