Three Parts of the Attack Profile

The attack approach really has three parts: Initial Line Up, Aim and Strike, and Egress.

If performed correctly, the Initial Line Up will make the Aim and Strike a much less stressful event!

Terrain checking is critical. Think of the planet as Object One in your list, and remember that you’ll have to fly through whatever is occupying the space on the far side of your target. Don’t attack towards a steep hillside or mountain, as one will not be able to fly through it no matter how skilled one thinks he is.

Look at target orientation — if there are trees or buildings, try to attack in a direction that doesn’t place obstacles in your path. Similarly, if there are trucks on a road, the best attack profile is one that places them “ducks in a row.”

On a solitary vehicle, attacking broadside gives the pilot the biggest target to aim for.

Since best downward visibility out of a cockpit in level flight is to the sides, most often that’s where one will begin the line up — flying perpendicular to the plane-target line.

Perform a quick scan around you for enemy fighters. Hopefully one has an escort; if not, make exactly one run and then climb out of there defensively. Always assume the enemy has aircraft in the area and on its way to attack you!

Once you commit to an attack, all of your attention will be on the subject in front of you with nothing to spare for anything else.

Gently bank towards the target to until you are pointed at and about 200-400 meters short of the target. Yaw is the enemy of gunnery and a clean egress – we want the nose to point in the same direction of flight! Reduce the throttle by half (or to the minimum), get off the rudder pedals, and watch the spot you selected short of the mark. 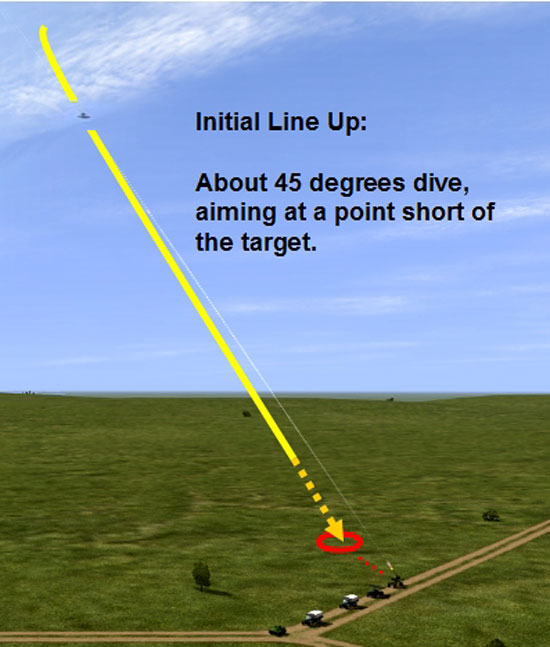 Forget instruments! The ground is a far greater enemy than your target, and you are teasing with Object One in this maneuver. Don’t take your eyes away from the sight! If the spot you selected is drifting left or right with your wings parallel to the ground, you’re slipping. Reducing the throttle to reduce torque or slightly rolling the wings is in my experience easier to adjust to than rudder input – and has the least effect on shooting.

We want about a 35-45 degree dive — that’s where the target itself is about a third of the way down from the top of your sight ring. It’s enough of a dive to pick up speed, keep the target in the sight, and still shallow enough to pull out of easily.

We’ve also selected a point short of the target to make ourselves a harder target to hit if they’re shooting at us. Rather than simply aiming at a relatively stationary aircraft with a changing range, the gunner is forced to apply lead as well. It may not seem like much by way of mitigation, but it’s enough to keep machine gun rounds above you instead of in you. It will also eliminate main gun hits from tanks. 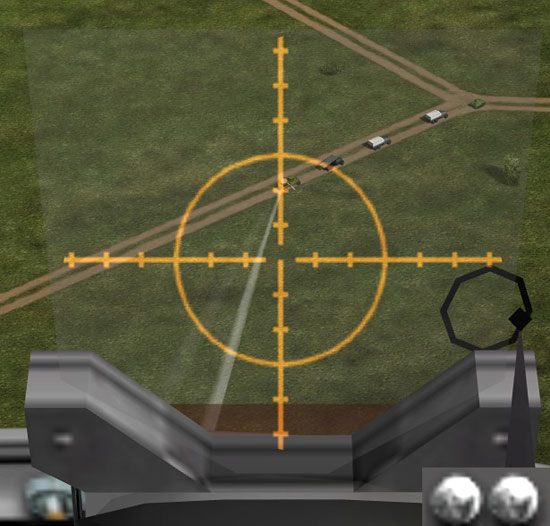 We’ve only got a couple of seconds (at most) in this phase, but it’s where one will know if he should abort or press home. As one gets more practice, the distance from the target for the initial line up can be reduced and the time spent in this phase dropped to just a second.