“BeachAV8R”:: Do you work in an industry that taught you the special skills necessary to do the fantastic mod work on EECH / EEAH or is it a hobby?

“arneh”: I do have a computer science degree, and as mentioned I work as a developer. So in that sense I do have some background. But I’ve never done any game/simulator programming before. And I don’t have any aviation or military background. But maybe having 20 years of flight sim experience counts for something?

“BeachAV8R”: Can you describe the process of modifying the EECH / EEAH code for us lay-persons? What tools and programs are necessary?

“arneh”: For the exe changes you will have to know programming and you need the source code, which you get by asking on the dev mailing list. You will also need a compiler, most use OpenWatcom for EECH / EEAH development, but some use Microsoft Visual Studio. Both can be downloaded for free. And you will need an editor, but if you know programming you probably have a favorite already. Personally, I use Eclipse for EECH / EEAH editing, as that’s a nice, free development environment.

This page at EECH Central describes how to get the source code and compile it into an exe, so that’s a starting point for any aspiring EECH / EEAH developers.

I guess it’s no great trick to experienced programmers, but what I found easiest for figuring out how to do the changes I wanted was just simple text search through the code; e.g. if I wanted to change how the radar worked, a simple text search through the code for “radar” would quickly show up all the places where modeling of the radar was (and probably a few not relevant hits). And if I then looked at the code it usually turned out to be fairly easy logic and math which I could understand and then change in the way I want to. The source code I work on in my day job is a lot more complex, even if they’re both roughly the same size.

For the cockpit I used Lightwave for making the 3D model. I then used a converter I made myself for converting the Lightwave model to EECH / EEAH’s 3D format. Since it was the first 3D model anyone had ever made for EECH / EEAH (apart from Razorworks themselves of course), there were a lot of things which I had to figure out to make it happen. But now that part is done and it should be much easier to make more.

FireBird has also made a 3D converter, and I believe he’s working on making it work for 3ds Max’s format as well, which should be nice since a lot of people know 3ds Max a lot better than they know Lightwave. And he’s also just recently made a converter for Lightwave scene files as well, which means we can better describe full models with various animations and several levels of detail and such. I haven’t tried it myself yet, as he just finished it, but it should make it easier to make new models.

For the little work I’ve done to textures I’ve used GIMP, which is another free program. Though I’m sure real graphics artists would prefer Photoshop.

So as you notice you can get most of what you need for modding for free. The exception being Lightwave. 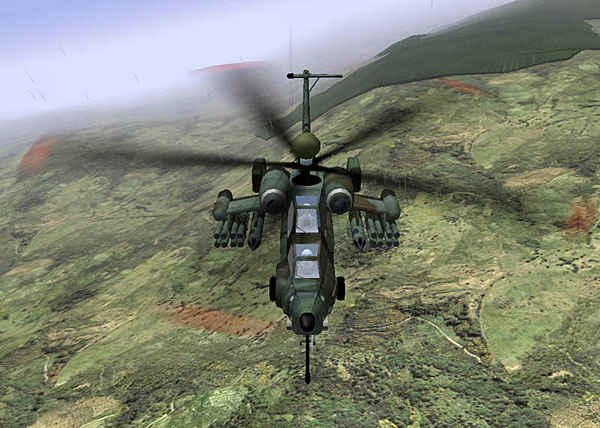 “BeachAV8R”: How many hours do you estimate you’ve spent improving upon EECH / EEAH?

“arneh”: I don’t want to think about it. But the Apache cockpit, including making the tools, and figuring out how to integrate it into EECH / EEAH, has taken most of my spare time for the last half year; so quite a bit.

“BeachAV8R”: Do you see other areas for improvement in EECH and what do you think the future holds for us fans?

“arneh”: I see way too many areas to improve EECH, and not enough time to do it all!  I think, and hope we will see many more new 3D-models now that I’ve shown what is possible, and FireBird has made a scene converter. Myself, I am going to work on a Hind cockpit, which has been very much requested. And I plan to not only create a cockpit for it, but make the Hind almost a study-sim! I will try to better include some of the more unique characteristics and missions of the Hind. It is a very different helicopter from the Apache Longbow, so it should be a nice change. I used to play Digital Integration’s old Hind sim a lot. It was the greatest thing before Jane’s Longbow, so I’ll try to see if I can get some of the spirit and gameplay from that old sim into EECH / EEAH.

I also have some more long-term ideas and dreams about what I want to implement, including some things never seen in flight-sims before. We’ll see if I get around to implementing them at some point, but I prefer to keep them to myself for now otherwise people will start to ask when it will be released even if I haven’t started yet! And I also prefer to at least make a proof of concept before I announce anything so that I can be sure that I’ll be able to deliver before I promise anything. So you’ll just have to wait and see if any of my lofty plans and ideas turn out some time.

“BeachAV8R”: You obviously have a passion for EECH / EEAH, do you get to enjoy the fruits of your labor very much by playing or are you more interested in the mechanics of improving the sim?

“arneh”: I do play it, but not as much as I would like. And I certainly spend more time modding than playing nowadays (my test pilot log entry, which I use not to mess up my real pilot log, has a lot more flight hours than my real pilot log, even if his flights are mostly just a few minutes long each of them to test some specific feature). I guess part of the “problem” with playing for me is that each time I play I discover something I want to change. And then I just have to go and do it! So every time it ends up with “I just need to change a few more things, then this sim will be so great that I’m going to play it a lot!”  But once I’m done with that thing, I play and discover yet another thing I want to change and so it goes on forever. [Editor’s note — Lucky for us!] That said, it is a lot of fun to do the mods as well.

“BeachAV8R”: What mod that you have performed on EECH / EEAH are you most proud of?

“arneh”: That’s like asking “who’s your favorite child?”! Well, not quite as bad. The latest is usually my favorite. So I guess the Apache cockpit is the one I’m most proud of, both because it’s the latest, and because I put so much work into it. And I didn’t just do the minimum of work, but properly integrating it so that all instruments work, and having animations like a moving co-pilot. And also because there were a ton of challenges to overcome, but I managed to solve them all in the end.

But one other thing I’m quite proud of is that EECH / EEAH has remained fairly bug free despite the big changes I’ve introduced. Sure there are — and will always be — small bugs. but despite fairly big changes it’s still very stable and without serious bugs. At least I hope so, but I’m sure someone will go out and prove me wrong now. 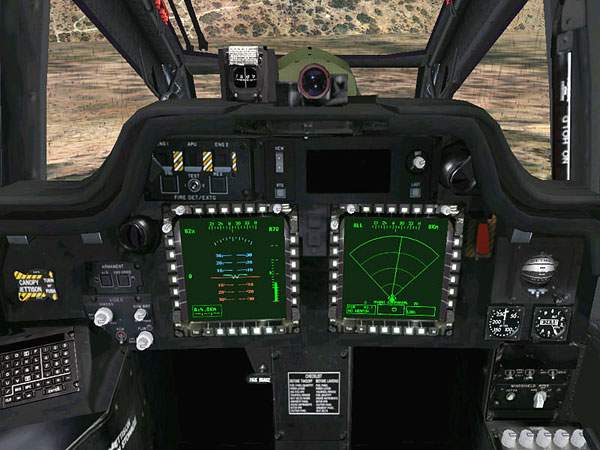 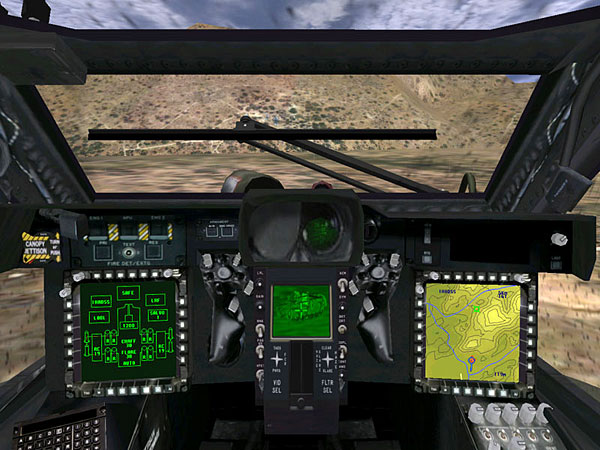