Feel a Little Less Like You’re Flying in Generica

One thing that bothered me about the stock install of FS2004 was the traffic, or the lack thereof, to be specific. It felt like every airline in the world had filed Chapter 11 at the same time. Taking the red eye from Dallas to DC probably got a lot more expensive, not to mention exclusive, with fewer planes on the tarmac and making most of the airports I’ve been to look deserted.

Just Flight’s Traffic 2005 remedies this and it does it in a big way. It is an AI traffic database that can schedule more than 280,000 flights from more than 500 airlines and it’s all based on real-world schedules. There are about 1,200 different combinations of liveries and aircraft and it also includes general aviation flights.

It may have been out there for a couple of years, but it’s worth a second look for all you virtual airline pilots. It includes several very interesting side programs and tools, but we’ll get into those in a second.

The first thing you will notice is the amount of traffic. There’s a lot of it. You’ll have to crank back on the traffic slider, especially with the can’t-walk-and-chew-gum AI air traffic controllers. At 60%, every gate at D/FW International has an aircraft waiting and the ones in line for take off are stacked four deep.

Another thing you’ll notice is that the stock ATC voices have been replaced by the cast of PBS’ British comedy shows. Not really. Two of the voices are actually those of some good friends of mine, Alex Ford and Martin Wright. These two sterling fellows are Just Flight’s Publishing Director and Technical Development Manager, respectively. No offense, guys, but I was on the tarmac at Austin-Bergstrom and I felt like I was on the set of This Is Spinal Tap. A quick read of the manual informed me how to revert to the stock ATC voices and the world sounded right again. Although, I really wanted a Guinness after hearing that for a while. 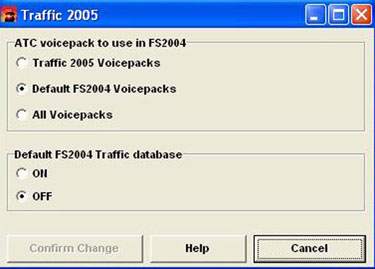 All of the big names in commercial aviation are there. American, Delta, British Airways, Uzbekistan Airlines, they’re all making flights to and from everywhere. You will also see several cargo names like UPS and FedEx going about the normal business of ruining your order from Newegg. The AI gets pretty busy and taxiing on the ground with all that activity will choke my machine’s frames-per-second count down into the low teens. The normally post-apocalyptic world seems to have life now and for the price and the time saved, this is a worthwhile purchase so far.

As a matter of fact, FS2004 generates so much traffic, not only can you not crank up the traffic slider to 100% and expect to land anywhere but dirt airstrips on cattle ranches in Wyoming, but there’s so much traffic, that FS2004 needs some help.

Enter the program AISmooth. You’ll have this running in the background separately while you’re flying in FS2004 and it acts like an uber-ATC, it’s orders taking precedence over the stock ATC’s AI commands. What it does is find conflicting traffic at the busiest airports and puts aircraft in holding patterns when they’re following each other too closely. It’s necessary if you’re going use Traffic. I tried running without it and witnessed no less than nine go-arounds in a row (one of them mine) on just one of D/FW’s runways with the traffic slider set to 60%. After running AISmooth, the traffic became manageable and I was able to land at places like D/FW, Bush Intercontinental in Houston and Chicago’s O’Hare.

AISmooth’s ATC voice is one of those disembodied, text-to-talk speech kind of experiences. You can turn it off, but you get used to it. You also get used to Alt-Tabbing to see the often-frightening number of aircraft that AISmooth is monitoring. 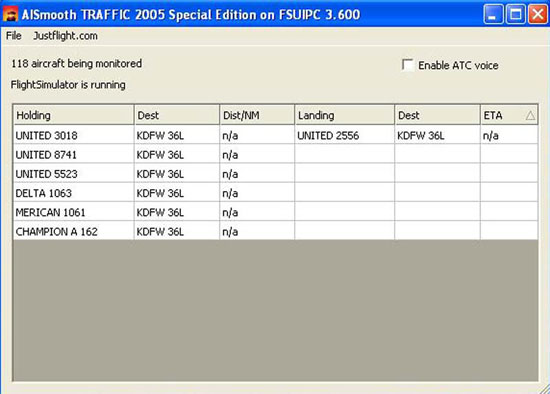