Longbow Gold came out during 1997, the year after the original game had hit the shelves. And you may think that this is just a ‘re-packaged’ version of the original, yet another money-making hype. And again, you’d be totally wrong. Not only do you get AH-64D Longbow and Flash Point Korea in one box, but they are merged so that you don’t have to install both of them separately. Fully patched, you also get a much-anticipated 3DFX update. For those lucky enough to have PC systems with a Voodoo card, you could install this graphical update and have the whole game turned from Software only to fully-fledged 3D Glide mode. The result being smoother frame-rates, higher-definition models and units, nicer terrain and beautiful smoke and lighting effects. The only down-side — yes, there is one — is that for some reason you can no longer select the Apache to fly. You only have the Longbow. This is a great pity, as flying the Apache is one of the great features the original game had. If you can get over that though, it is definitely worth it. The game also has a Windows-native executable this time around, meaning that you don’t have to mess with DOS anymore. This loads the game straight away and caters for a much more versatile platform. A DOS executable was provided also, for those of you who hadn’t upgraded your computers yet.

A brand-spanking new box, fully revised manual and documentation come as standard. If you did not get the game when it first came out, or have had difficulty finding the FPK expansion, or are just a huge fan of this game… then you would have to  get this. It would of been a crime not to.

Longbow 2 was shipped in 1997, only a year after the very first one had come out. An add-on and a ‘Gold’ edition later, Jane’s / Origin / EA had done us proud again.

This was one of the very first sims I played, and definitely the first helicopter sim I played. The first time I played the demo… WOW! I kept getting shot at and didn’t know what any of the controls did, but I just started playing it more and more, eventually flying round all the waypoints and blowing the hell out of machines I had only previously read about. I did not know at this point, that I was playing the most realistic combat helicopter sim ever… and the one that all future titles in the genre would be judged by. The graphics and authenticity blew me away — which we’ll come to in a bit. Why am I even qualified to do this particular section on LB2, as there are loads of people who still play this game? Well, I actually asked myself this, but after I added together all my scores in LB2, I knew that I was probably over-qualified… to date, I have 140hrs of flight time, over 330 successful missions and over 6200 kills. Pretty impressive, don’t you think?

I believe I rushed out and bought the full game as soon as it was released. After playing the demo, I just HAD to have it. This was the first game of the series I acquired, and it took me years after its release before I even contemplated getting the earlier titles. The box was astounding, again with its fold-out flap. Spectacular cover art, real photos, in-game shots and info taken straight from Jane’s, this was enough to get my mouth watering before I even installed the game. The manual was an impressive hulk of a thing, more the size of a novel than a game document. It took me ages to master it, and even longer to actually complete a mission. I must of spent hours just sitting there playing around with all the buttons and taking in the amazing graphics and watching the ground forces battle it out. It was so complex that after a while I gave up on it. It was a good few years later before I decided to have another go, and then a couple of years after that before I decided to really get into it. And when I did, it was so rewarding. Oh yeah, and this time it was made for Windows 95 from the get go, and was not at all DOS compatible. 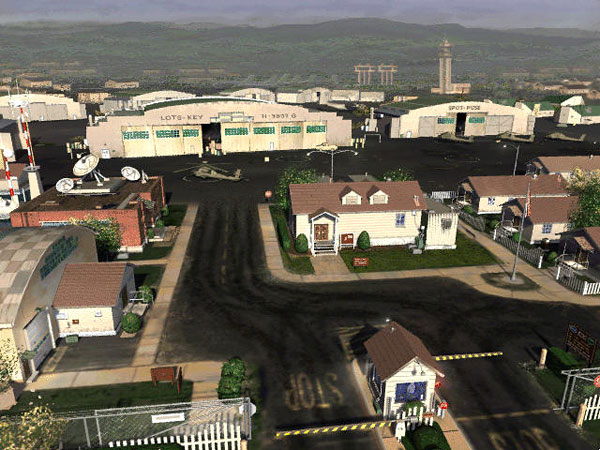 The intro video totally blew me away, and it’s still one of my favorite game movies to date. You’d have to see for yourself to see what I mean. No words can describe it. The menu was again set out like an airbase, with each building taking you to a different game type or training. At the minute, it looks not too different from the old titles. Well, you may have been in for a bit of a surprise if you couldn’t wait like me and headed straight for Instant Action. This game was made with 3DFX in mind from the ground up. No longer just a patch add-on, the whole game is rendered in 3D and was compatible with all the latest Voodoo cards of the time. And it shows. Dynamic lighting, smoke, fog, haze, and lens flare are just some of the eye candy on offer. Night missions are especially gorgeous-looking, with cannon muzzleflash and rocket motors lighting up the night sky, explosions letting off bright shockwaves over the terrain, and tracer rounds littering the sky. It’s incredible. The unit models are not the best ever seen but are pretty well done nonetheless, and the external helicopter views are outstanding. Software mode is available for those of you who were not lucky enough to have a hardware-accelerated graphics card. Naturally, most of the visual loveliness is gone, but the game is still very playable. One of the new additions in LB2 is the ‘Virtual’ cockpit view. This is a rendered 3D view of the cockpit that makes for more immersion than the 2D bitmap ones that were only available in the previous titles. It is frighteningly life-like, with the whole airframe vibrating, the rotors spinning overhead, light from the sun flickering through the rotors onto the cockpit dashboard and canopy, and you can look round and see the missiles actually leaving the rails on the stub wings! 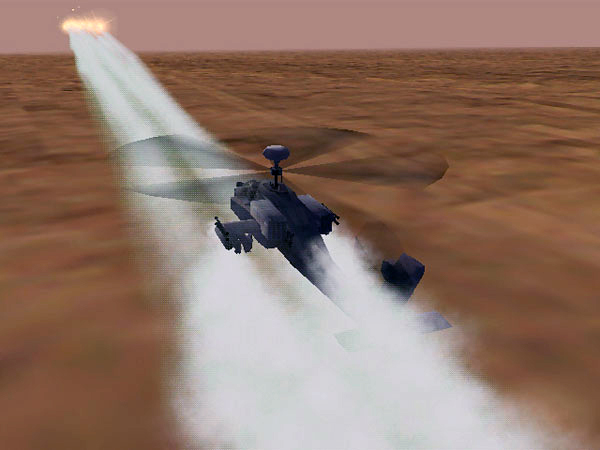 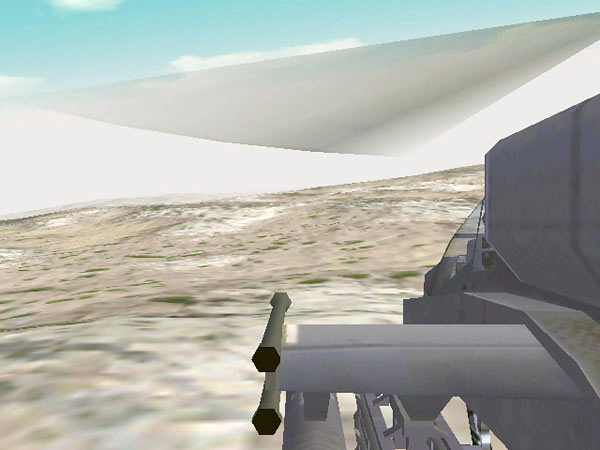 One of Many External Views