UAVs no come in all shapes and sizes, from the small, almost model-airplane propeller sort that are launched by hand — right up to remotely-piloted light jet aircraft that use runways to take-off. Some are no more than a miniaturized WW2-looking plane, going to the extremes of stealthy and streamlined spacecraft. Performance varies from only being capable of flying a few hundred feet off the ground, to having the ability to nearly touch the edge of space.

One example of the small type is the AeroVironment RQ-11 Raven, which is a remote-controlled miniature unmanned aerial vehicle (or MUAV), and is launched by hand and powered by an electric motor. 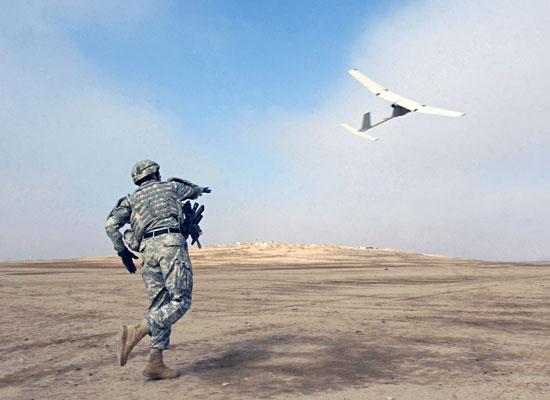 This class of aircraft is not limited to fixed-wing types, there are even remote-controlled helicopters, such as the Northrop Grumman MQ-8 Fire Scout. We will look at this in more detail later.

For the future, UAVs are expected to fulfil all types of military roles. Far from being limited to recon, they will as mentioned before, be used as attack platforms — be it offense or defense, but also in the logistical role. With this mission capability, these unmanned craft could be used to ferry ammo and supplies to frontline troops without ever having to risk the lives of pilots. Who knows, they may even get so good that they could do MedEvac missions and rescue wounded soldiers and downed pilots. Military use of UAVs is now at its highest.

This quote from Wikipedia explains more:

“In 2005, tactical and theater level unmanned aircraft (UA) alone had flown over 100,000 flight hours in support of Operation Enduring Freedom (OEF) and Operation Iraqi Freedom  (OIF). Rapid advances in technology are enabling more and more capability to be placed on smaller airframes which is spurring a large increase in the number of Small Unmanned Aircraft Systems (SUAS) being deployed on the battlefield.”

One role of the UAV, would be to work alongside normal aircraft and provide real-time scouting and recon info. The UAVs would go deep behind enemy lines, and relay info and photos back to aerial or ground units that are back in a safe sector. Attacks could then be coordinated safely, and only the UAV would be in harms way. This type of role would be very well suited for use with the latest indirect fire weaponry, such as artillery or aircraft carrying the Hellfire missile, as the UAV could also be fitted with a laser designator. With such a device fitted, the scouts could sneak in, lase key targets and then have a unit fire on it from safety. It was this role of the UAV that partly led to the downfall of the Comanche helicopter program, as this state-of-the-art chopper was to work alongside Longbow helicopter gunships in the exact same role as I’ve described here for the UAV. And on a plus side, UAVs don’t have anyone onboard — but the Comanche would have still needed two crew members in the cockpit.

On a civilian and commercial level, UAVs are also playing a key role. Yeah, you’d think this sort of thing would only be used by high-tech military applications. No, in fact, some types of UAV are used for everyday tasks that may otherwise take hundreds of workers and man-hours. In Japan, the UAV market is growing rapidly amongst commercial enterprises, and it’s said that unmanned aerial helicopters are used to harvest rice crops and one unit can do the work on ten trained people. Crop spraying and weather monitoring are also suitable roles.

Spy in the Sky

Spy in the Sky Page 4

Spy in the Sky Page 5