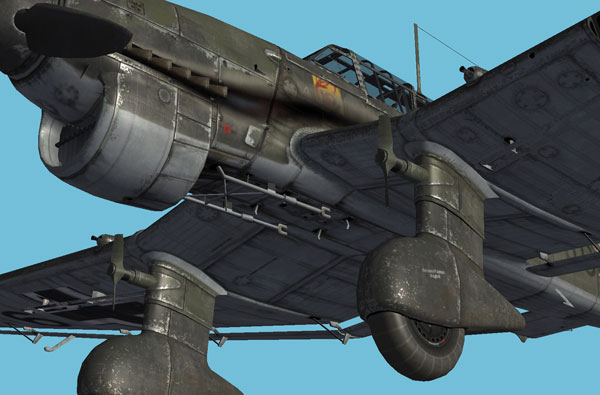 SimHQ is fortunate to once again have an opportunity to talk about our flight simulation hobby with Oleg Maddox and his longtime friend and colleague Ilya Shevchecko. We’ll be discussing the Storm of War series and the first two titles in the series: Storm of War: Battle of Britain and Storm of War: Korea. We’ll also discuss copy protection and digital rights management, IL-2 modding, and other interesting flight sim topics. As we all know, Oleg and Ilya have unique insights and perspectives on flight simulations, and simulation topics in general and we’re very glad to have them share those with us.

Doug: Thank you once again for addressing our questions Oleg, and thank you IIya for joining us. This time around we have some specific areas compiled by the SimHQ Staff for you to provide your thoughts.

Oleg: Our pleasure. It should be fun.

Doug: Okay, let’s get going. Why has Russia become the new hub for flight simulation development?

Oleg: I don’t think that’s the case. Others are doing it too. Some manage to do better, others not so much. It all fluctuates with time. Right now it just happened to fluctuate this way. We’ll see what happens next.

IIya: There’s also the fact that flight simulators are the most complicated genre to develop of all. They require a team of some very specialized experts. Flight sim developers can’t just be talented game designers, artists and programmers. Even people like that are hard to find, and with a flight sim, you also need people with an intimate understanding of very complex real-world disciplines on top of artistic and programming talent. I doubt that you’ll find many teams outside of Oleg’s with so many people with advanced degrees in aerospace engineering, aerodynamics, and physics.

So perhaps Russia has more flight sims coming out than other countries due to the combination of having some of the best trained aviation specialists in the world, and the post-Soviet conditions leading to fewer jobs in the aerospace sector.

Doug: Will we ever see a time again when flight sims have the prominence they did in the mid-1990s?

Oleg: I doubt it. Flight simulators today are very complex due to the ever increasing quality and fidelity in regards to physics, graphics, and most other features. Back in the 1990s things were much simpler. These days creating an IL-2 level AAA simulator costs an enormous amount of money, and few can afford it due to the shrinking PC market.That’s a moot point however, since true flight simulators can only be made on the PC and not on consoles. I think there’s room for no more than three or four major flight sim developers on the market right now, and probably in the non-competing segments of it (WWI, WWII, modern, and perhaps helicopter sims as a separate segment). This is due to the fact that the increased complexity leads to very narrow specialization. A single developer can hardly pull off sims spanning the entire history of aviation, or try to make a fully arcade game / UFO simulator.

Doug: What is the biggest surprise you’ve seen in the flight sim industry?

Oleg: The closure of the Aces Studio by Microsoft. Those guys seemed virtually invincible in their niche. They were a de-facto industry leader and had tremendous third-party support. For those third parties the news must have been a tremendous shock.

Doug: What has transpired that you knew you were going to be correct about?

Oleg: Disappearance of some of our competitors. They paid little heed to many things a successfully balanced flight simulator needs. Namely, the users’ interest for things new and never done before, and accuracy of modeling without getting too carried away.

Doug: Does it concern you that Microsoft closed Aces? Certainly you have said the Flight Simulator developers are a group you want to attract with the new engine’s capabilities so it potentially could help your future endeavors, but with regards to losing such a notable group, does it bode bad things for flight sims or it was just “a business thing”?

Oleg: What can I say, business is business. With the economic crisis and Microsoft often doing things with huge numbers of people that may not always be needed, and with massive overhead, they perhaps could have avoided closing the entire studio by cutting down on management and keeping only the successful developers.

Speaking about things I want for myself, having seen the enormous third-party industry built around MSFS, we had always planned to bite into that pie. Or more accurately, to give these third-parties something more exciting to do. With IL-2 we had an engine not designed for external development, especially with its crucial online component, so we simply could do nothing to open it up to external teams. It was impossible without risking our cheater-free online gameplay.

Today, we found the way to have our cake and eat it too. As initially designed however, our goal wasn’t as much to steal some teams away from MSFS as to create our own satellite industry from scratch, giving an outlet to fans who want to develop and expand the Storm of War universe. So we’ll be giving proprietary tools to external developers which will allow them to insert new aircraft and other objects into the Storm of War engine, and their work will not affect the crucial element of online fairness.

However, with the demise of Aces Studio, I really hope that many of the MSFS external developers will begin to look in our direction and consider switching over to Storm of War.

IIya: I have the deepest respect for the core MSFS team, and for the huge number of flight simulator developers around the world. They keep this industry going. There is tremendous talent out there, and some MSFS products developed by third party developers are easily as good as anything developed by professional flight sim teams. If we can bring some of them round to our side, it has to be great for everyone, for us, for them, and most importantly for the end-users.

Remember that the Storm of War engine is very flexible, and it’s built completely from scratch to next-generation standards. Without third-party support we could hardly begin to explore the possibilities, and they are truly endless. For third parties, there are no limits at all. You could cover the entire history of aviation from WWI to today, both military and civilian, props jets and everything else. Basically anything you could imagine.

There’s only so much one development team can do, and look at how far we’ve taken IL-2 over the years with everything having to go through Oleg. I can’t even imagine the things that we’ll get to see with a powerful next-generation engine that’s opened up to external talent.