Part III: A Visit to some Stans, and a Delhi

Aeroflot operated regular Tu-114 domestic service to Tashkent and Alma Ata from Moscow. Delhi saw frequent visits from the airplane back in its salad days, reflecting the close relationship between the two capitals. Even today India remains a major market for Russian exports.

The oh-dark-thirty departure from Krivy Rig was followed by a climb on top to find the clouds brilliantly illuminated by a half moon. 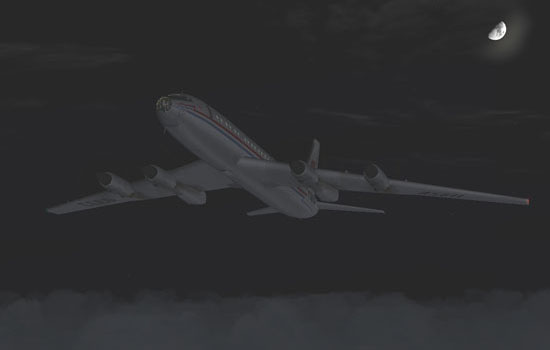 No less a design luminary than Steve Small once told me that the biggest challenge facing aircraft designers in FS is that the mathematical universe provided by Microsoft is far from perfect, and doesn’t come close to reflecting the physical universe at all. It’s just a rough approximation. In other words, you’d like to think that creating an airplane for the sim would be as simple as defining the weights, airfoils, controls and powerplants of the real-world airplane, and it would fly just like the real thing. Nope. Some fudging is necessary, and that’s what makes FS aircraft design something of a black art instead of a straightforward key crunching task.

Usually designers will do the fudging someplace where, to the users, it won’t show. Most often it’s in the mathematical definition of the airplane. That way we can use “real airplane” weight and balance, handling, and performance parameters. But for reasons only they know, the designers of the Tu-114 model chose not to do it that way. If you fly it expect some very weird stuff. For example, the weights are just nuts. The listed gross weight of the sim airplane is nearly three times the actual gross of the airplane. Also, there’s no provision for changing the payload, and the weight of the airplane with full tanks is something like 60,000 pounds over gross.

But it sure flies nice. If you can accept the bizarre features that resulted from the unusual design choices, you’ll enjoy flying it. 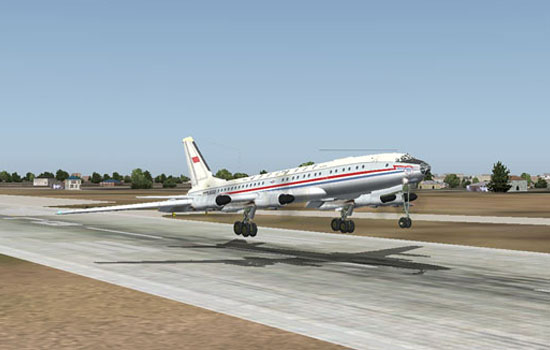 Over the numbers at Tashkent. 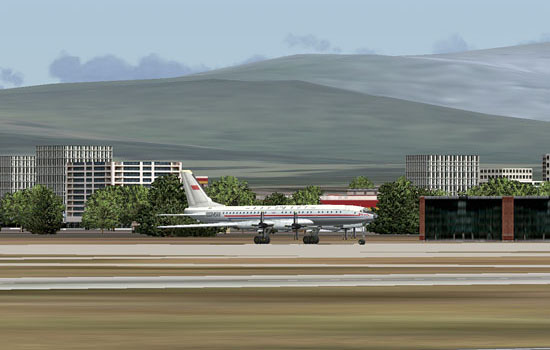 That’s not Denver and those aren’t the Rockies. On the ramp at Tashkent. 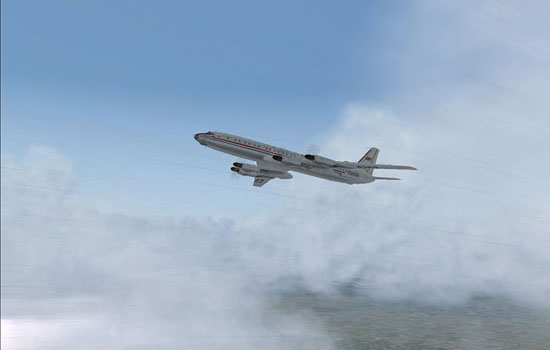 On the way out of Tashkent, the thunderstorms were waiting.