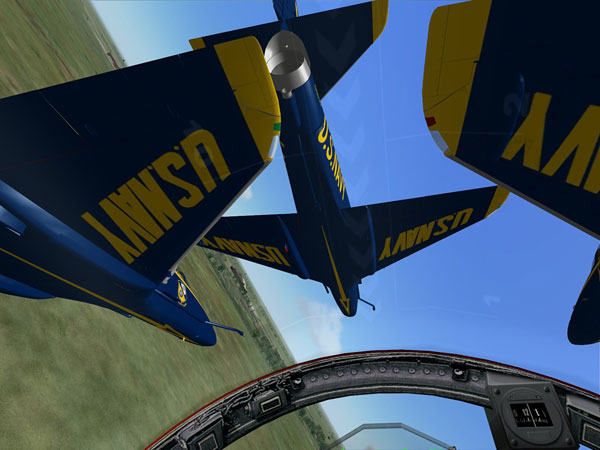 Rhino: When we do the F/A-18 show, we do the “word for word”, “maneuver for maneuver” show that the real team does. Great tools for us have been web sites like the one that Steve Holzinger has (www.stevesairshow.com). Steve goes to about 10 or more shows a year, with a fair amount of them featuring the Blues. Watching these videos give a sense of what the maneuvers are and what kind of timing that needs to happen. That gets us started.

To get past that point, we need to know what it should look like from the cockpit. For that, we’ve gotten an abundance of help from current and past members of the Blue Angels on how to fly the demo the correct way. Some great personal friendships with pilots, maintainers, and ex’s and alumni have resulted from our conversations with team members.

20mm: Perhaps a controversial topic, but I gather the team is going with the A-4’s this year in a “retro” type presentation. How was this decision made and why?

Rhino: In late 2006 a gentlemen by the name of Fred Stankovich approached us with kudos and congratulations about the 2006 video. He and his son loved it. Low and behold, “Stank” was a former Blues pilot himself, and flew the #2 position with the team from 1979-1980. The help and doors that “Stank” was and has been able to open for us in the past 2 years really helped in further developing our team. “Stank” graciously agreed to become our official Technical Advisor, and has been a VBA team member ever since, helping us to further refine our routine and comms. Flip forward a few months when members of the team went down to the NAS Pensacola Blue Angels Homecoming show in 2007. There, “Stank” introduced us to several Blues ex’s and alumni, including some of his old teammates.

With that said, the A-4 is an icon from one of the golden eras of the Blue Angels, and we also wanted to bring something new to our audience, since we had been flying the F-18 since 2004. The A-4 show seemed to be the perfect fit.

Finding A-4 footage and the show order was quite the challenge, since the Blues retired the A-4 at the end of 1986 — well before Mini-DV cameras and YouTube! However, “Stank” pulled through again, and pointed us to some videos that were made at the time. In addition he enlisted the help of his former team members, and Boss Denny Wisely provided the A-4 maneuvers in the form of a scanned document that showed the drawn maneuvers and written descriptions like the example (below) of the Solo Opposing Blivet.