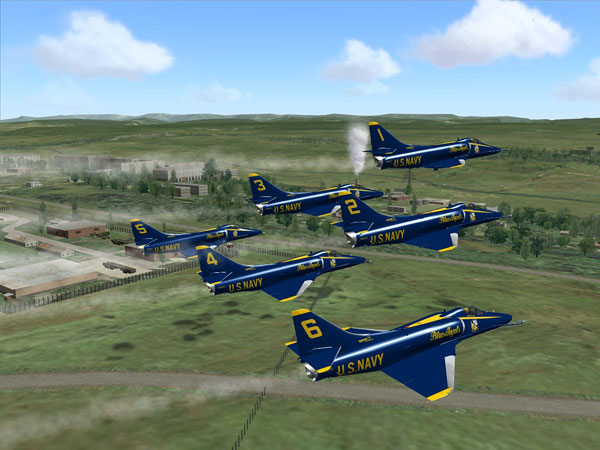 20mm: Who does the skins and paint for the aircraft? They’re amazing!

Rhino: That would be “Kato” in the 4 jet. “Kato” has done all of the mods that we have flown on the team. We are now a long way from our humble start where we simply made the F-18 flyable, and repainted the in-game F-18. Now we have a whole new F/A-18A, an F/A-18B, both with multiple new animations such as pilot “gang signs” and shock cones. We have both a C-130T with the appropriate antennas and dorsal observation dome, and a C-130F with authentic markings from the 1980’s. Both feature working JATO bottles and prop vapor during the JATO takeoff, as well as a waving crewman and U.S. flag that pop out of a hatch on the top of the fuselage after the landing! We also have several other Blue Angel related items, such as the authentic hangar from the Blues home airfield in Pensacola, the comm cart from where “MO” communicates with the pilots, a semi truck that marks show center for the jets, and an F-4 gate guard. It all helps to add the Blue Angels atmosphere.

As always, for the new A-4 model, we wanted to represent the Blue Angels as accurately as possible, and we tried several 3D models of the A-4 before finding one that was close. Marv Mays created the original combat 3D model, “Stank” helped to provide detailed data on what the Blues A-4 looked like, and “Talon” sent Marv specific Blue Angel details from Stank and that he had researched, and made some adjustments to the model. “Kato” took that 3D model and ported it into it into Lock-On with all the correct animations and tail numbers etc.

On a related note, Talon created the VBA web site and does the artwork such as signatures and banners etc.

20mm: How often do you all practice, and is it ever enough?

Rhino: A typical week in the life of a VBA includes practice 5 nights a week for around 2 hours. Is it enough? We would like to think so, but when we have the opportunity to practice more, we usually pounce on it and take advantage. As you might imagine, it takes a lot of effort and teamwork to get everything just right, but despite trying to make each show and practice identical, there are differences which make each one a new challenge. The reason we keep coming back is that there is no better feeling than all the pilots simultaneously nailing a maneuver.

20mm: Your team is obviously from all over North America. What challenges does that present in finding common time to practice, and most especially the multiplayer connections that are paramount for a precision flying team like the VBA’s?

Rhino: One of the biggest challenges we face is the fact that our #5 is from the “land down under” in Australia. We only get “Shifty” on Friday and Saturday nights most of the time, so those nights are very “sacred” to our team. Another challenge however, is getting the whole team together for a full practice. As sim people know, there is this thing called “real life” that gets in the way of what we would really like to be doing, and that’s flying the demo. For example, a couple of our pilots are students, some have families to attend to, etc. However, everyone knows that 5 nights a week there is practice at 9pm eastern, and we always get our guys showing up. 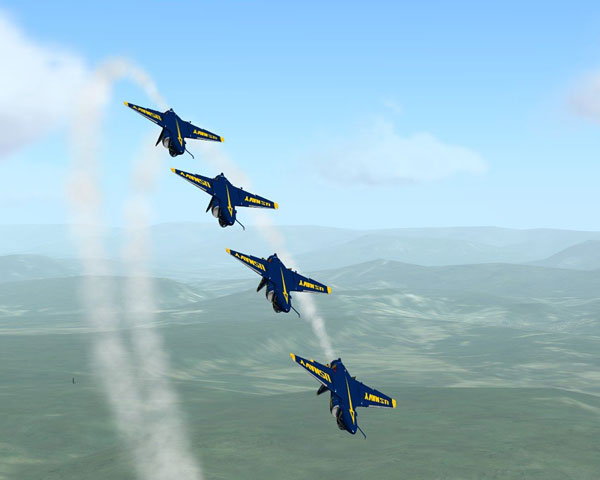