by Guest Writer Jörg Wiedemann
Earlier this year “EJGr.Ost_Caspar” and “EJGr.Ost_yogy” visited the Maddox offices in Moscow. We have been permitted to reprint their original article from www.yogysoft.de. Thanks to Jörg who provided us the translation to English.

For over seven years we have been friends with Oleg and some of his colleagues. Since our friendship is always quite enjoyable, the idea came up to meet these guys in real life and visit the city as well as some of the special locations in and around Moscow. Thought, planned, done. On the 24th of April, we met at the airport in Berlin, flew-off to Moscow. After 3 hours of flight over a sunny Eastern Europe (the broad and well visible borderline between Poland-Byelorussia is remarkable!) we landed in Sheremetyevo. Being absolutely kind, Kuzma and Vladimir from Maddox Games came through a 2-hour traffic jam to meet us at the airport. Through another 3-hour traffic jam, they brought us to our accommodations — an apartment from Stalin’s era with extremely luxurious furnishing. Even a PC was there… unfortunately thought from circa 1985. We went directly to sleep.

We started Friday with breakfast at “Kartoshka”, a fast food chain where one eats big stuffed potatoes. 2km further down the road is the main office of “1C”. Having arrived there, Kuzma lead us through the office and introduced us to each employee. We also learned about their job and got some insights into what they are working on. The deployment of resources is interesting:

Additionally, there is nearly the same number of “external” contributors working on the project. 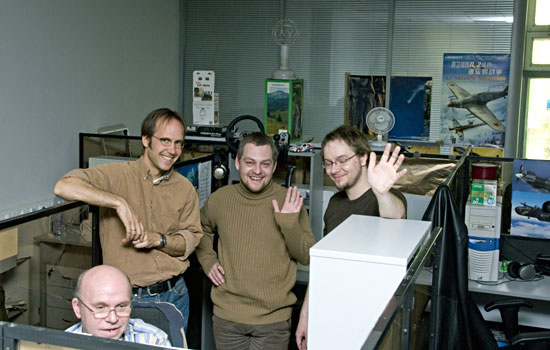 Here is a short summary of the topics we learned about regarding Storm of War:

Map: Not fully bitmap-based any more, but vector-based. That means, altitude lines, roads and rivers can be defined precisely with x-y-resolution of 1cm and altitude accuracy of 10cm. For rivers, additionally at each point the broadness can be defined. This is a huge leap for a natural representation!

Ground Textures: A new (NVIDIA) format with several information layers. No tga’s any more. So, the textures now include information for the AI like local maximum speeds. The textures also contain smaller roads. There is space for much more texture than in the IL-2 engine.

Roads: There are more types of road possible than in “IL-2”. Also, they are easier to deploy.

AI: Objects can and partly must cooperate with each other. For example, a sound search system consists of a generator, several sound searcher posts and a radio station. If, for example, the generator is out-of-action, the whole search system if out-of-order. Everybody can start imagining now, what all is possible with this. For myself, I think about the different stations of a ship and how its crew could be linked.

Vehicles: These will have a “FM”, i.e. their suspension is modeled. A German Panzer III was shown to us with all the places where unit emblems, national markings, etc. could be placed. There was definitely more than a dozen locations such as 4x Balkenkreuze, 2x Divisions sign, 2x licence plate , 2x company/regiment/…

Ground Objects: Most buildings will have two damage levels (undamaged, destroyed). Some will have a more advanced damage model. We saw several buildings for small French towns.

Ships: According to their size, parts will have individual damage models (masts, cannons) including underwater parts like the ships screws.

Sound: Very laborious recordings on original planes were done. We could listen to an example of three-dimensional sound depending on head position direction as it will be necessary for 6-DoF.

Underwater Graphics: Work is going on for a kind of underwater landscape that the camera can move into. We saw a much nicer surf than in “IL-2”. 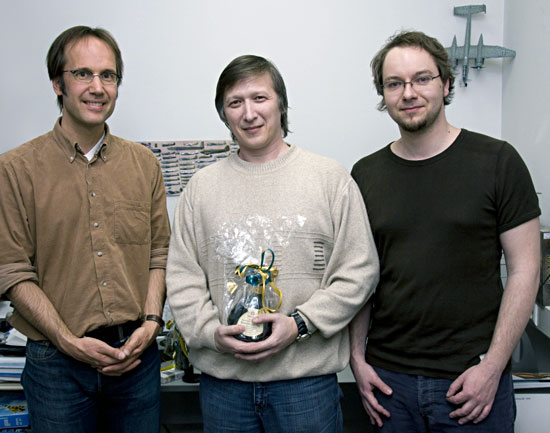 Yogy, Oleg and Caspar in the boss’ room.

For lunch, Oleg invited us the 1C canteen, where we talked about all kinds of things. After that, Caspar and I drove into town to visit the Kremlin, the Red Square, and the shopping mall “Gum”. Moscow is very clean although dusty. A lot of big cars are driving around. For example, I saw the first Bentley in my life. People are pretty slim, women very neatly attired. The weather was always very nice. Warmer than in Germany for that time-of-year. Interesting were some info-posters about the “Great Patriotic War” we saw in a park which described the Battle of Kursk in detail. Something like that “militarism” is impossible in Germany.

Saturday morning, we had a date with Yury Kryachko and his girlfriend. They drove with us (through the compulsory traffic jam) to Monino, the VVS-Museum about 30km east of town. 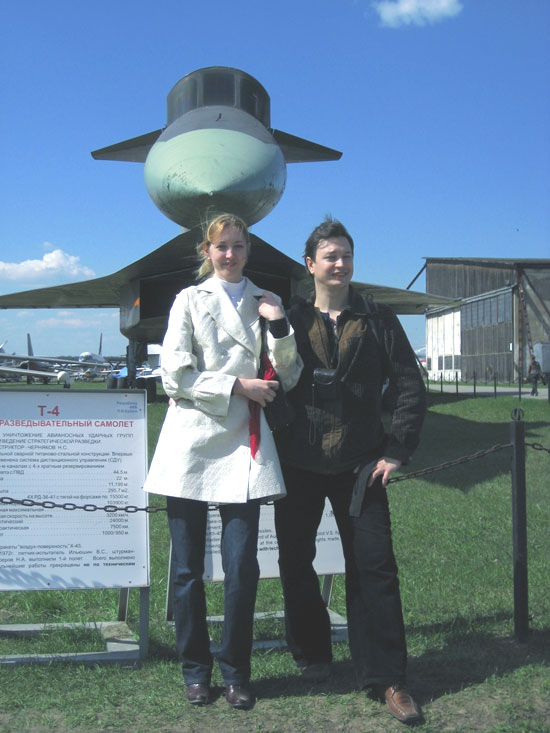 Yury and his girlfriend in front of a Yakovlev supersonic monster in Monino.

Saturday night we went out to see the city lights. This ended in a pub with a Rockabilly-Band and good, although very green beer. Very late or early… as you see it.

The next day we arrived just in time for a Mark Knopfler concert to meet Kuzma. It took place in the Olympic Hall (a 15 minute walk from the 1C offices) and it was really great! The place was sectioned in price categories between 60 to 250 Euro. We were in the cheapest and directly in front of the stage. There was even enough space for sitting. After the show, Kuzma lead us to an excellent Japanese Sushi restaurant where I enjoyed my first Sushi meal. We slowly finished the evening there.

On Monday, we peeped into Maddox Games’ office, said our “goodbyes” to everyone before Kuzma brought us to the express train heading for the airport.

Thank you very much to Oleg, Kuzma, Yury and all the others at 1C for their hospitality and help. Without this, the whole trip wouldn’t have been so exceptionally nice. We always felt very good and enjoyed the trip very much!

I was surprised, how western-styled Moscow is. Somehow I had the idea in my head that Russians still stuck to socialism. Altogether, the city looks similar to an upcoming East German city, just that it is 5 times bigger then Berlin…

BoB will be supercool — whenever it arrives!

My Trip to Moscow

My Trip to Moscow Page 2

My Trip to Moscow Page 3

My Trip to Moscow Page 4