Since we’ve got more virtual experience in flying than most real WWII pilots had in actual aircraft, the dedicated roles of Leader and Wingman aren’t relevant. We don’t live together, train together (unless one is part of a dedicated squadron), and work out tactics on the ground. We don’t know each other, let alone trust each other, enough to take a strictly subordinate roll in the virtual skies.

We are going to make a few assumptions, however, about our fellow virtual pilot…

In the standard pair or “Welded Wing,” the Wingman remains close (within 200 meters) on echelon with the Leader, ready to follow up on an attack as the situation presents itself. It’s two planes performing the same basic maneuvers against a common enemy.

The difference from historical doctrine is that as energy state and positioning change, so does the role of each pilot.

It’s a fine distinction, but the idea isn’t two pilots competing for the same kill (which is the online norm), but one where each pilot is evaluating which of the two has the best opportunity to strike at any given moment. It’s all about sharing the kill rather than claiming it.

Advantages:  In the standard pair, there is a fifty percent greater chance of friendly aircraft hitting an enemy aircraft. It also allows one aircraft to disengage and re-engage a target that has little chance of escaping.

Disadvantages:  Both members of the team tend to become fixated on the target, opening up both aircraft to unseen attack from behind, above, or below. Similarly, collisions and friendly fire are possible when both planes are vying for like positions against an enemy.

The rule of thumb for avoiding trouble is that the lower plane yields and defers to the higher plane. if you can’t see your teammate, don’t dive! And if you think you might hit your teammate if you fire, don’t shoot. You will hit him!

In the Thach Weave, Leader and Wingman scissor across each other horizontally, each either following the enemy into a turn and shooting before cutting out, or deflection shooting “at the cross” into the enemy aircraft. It’s the forerunner to the “Drag and Bag,” in that having the enemy on the tail of one of the aircraft is actually an opportunity to shoot him down.

While designed originally as a defensive maneuver against aircraft with a much smaller turning radius (Zero against everything the USA had), it works offensively as well!

Advantages:  The Thach Weave keeps the enemy off balance if he’s in defense, as he must track two aircraft going in different directions. If the enemy gains the tail of one of the pair, the wingman is in position to attack. Constant maneuvering makes spoiling attacks from other enemy planes much harder. It is the best defensive tactic as well, as the enemy can’t attack both aircraft at the same time.

Disadvantages:  Like all great maneuvers, the Thach Weave is easy to learn and hard to master. One has to discipline one’s self to keep scissoring and not simply lock onto the enemy’s six and follow him. Similarly, it only works if both of you know what a Thach Weave is and it’s decided that it will be used by communications. 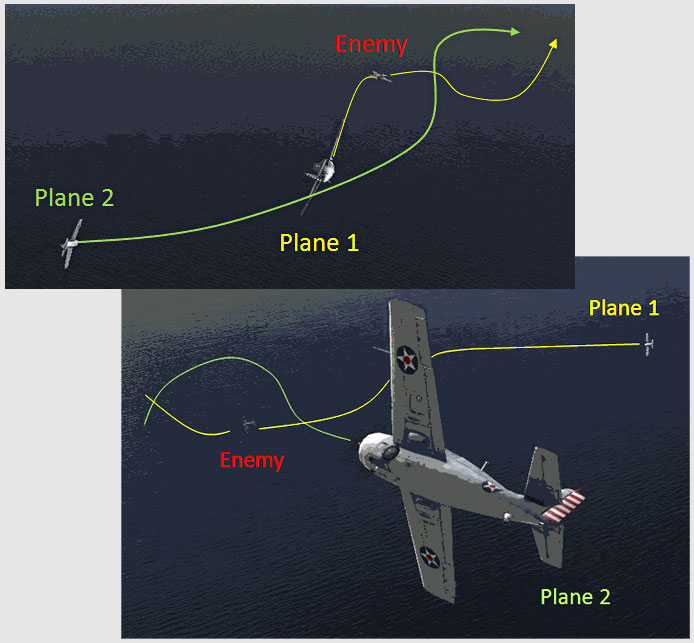 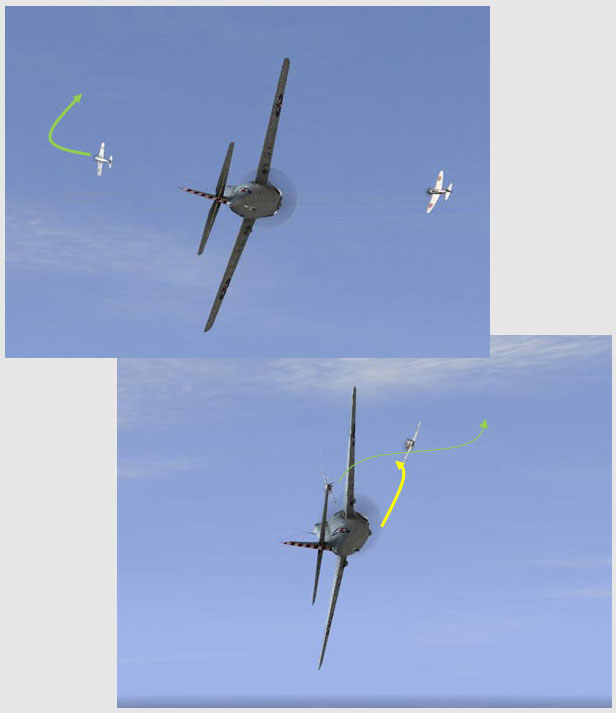