Arriving at the operations center, we both sprinted inside, into the Commander’s office. There, our Commander, a lean, wiry man with a grey crew-cut and intense blue eyes, intently studied a map spread across his conference table. With him were two pilots in flight gear, one a major, one a senior lieutenant. At our entrance, the men looked up. Seeing my civilian dress, the Commander cracked a wry smile.

“I hope we have not interrupted your rest too much, Alexandra Dmitrievna! But the Rodina’s business will not wait. You enjoyed your flight from the resort, I trust?”

“Er…da, my Commander. But I am ready to fly and fight!”

He nodded approvingly. “Good, my little falcon. We will need this today.” He gestured to the two other pilots. “You know Major Borisov and Lieutenant Mendeleev from the 588th, I trust?”

I did indeed! Our sister regiment, the 588 OShAP “Night Witches,” have worked with us many times since our troubles in Abkhazia. Quickly, the Commander explained the same things that Vasily had hurriedly briefed me on, and launched into the details of our mission.

“We will send four aircraft. Two of our MiGs and two Su-25 from the 588th. Sacha, your job will be two-fold: First, to take out this bridge here, over the river. There is another, several miles north, that is in Abkhaz hands, and over it the 41st Division will go into Georgian territory. But this one here must fall, because the 41st cannot get there fast enough to secure it and still concentrate its force in the north. The Abkhaz forces are too weak to hold them both. We know that Georgian forces are moving toward it so time is of the essence. Your second responsibility will be to cover yourselves and the 588th pilots from any air attack by Georgian forces.” He turned to the 588th pilots.

“Your job will be to knock out any ground resistance. We have intelligence reports of antiaircraft missiles and artillery being moved into the area.”

“Guns?” Major Borisov, a dark-haired, dark-eyed man, struck a match alight, putting the flame to the tip of a filterless Turkish cigarette. He sucked the acrid smoke into his mouth, holding the cigarette between thumb and upraised forefinger. “Twenty-three millimeter radar cannon, no doubt. Shilkas we were fool enough to give them in 1992.”

“Da, and Osa missile vehicles,” Mendeleev, a hook-nosed, sandy-haired junior, put in. “We can handle those.”

We spent the next hour reviewing aerial photos of the bridge, and the surrounding terrain. Our MiGs are front-line fighters, not well-suited for the work we were being asked to undertake, but our support would be the best we could ask for. Our sister regiment flies the Su-25T, the finest ground attack aircraft in the world next to the American A-10. After this, I piled into the GAZ jeep for a visit to Kolya, our long-term staff meteorologist. For many years, he has provided the weather forecasts for our activities, and it has become something of a superstition for me to meet with him while Vasily oversees the ordnance order for our aircraft. 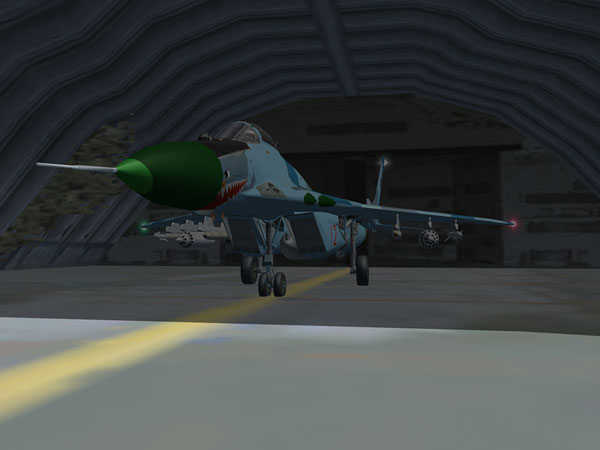 Today, I will carry the bombs; my responsibility will be the bridge. Our FAB-500 five-hundred kilo general purpose bombs will do this job nicely. Vasily will load out with B-8 rocket pods, loaded with twenty 80mm rockets each, and two laser-guided large rockets as well. Each of us will have two R-73 IR missiles for defense against air targets.

I stop at the Quonset-style hut that houses our staff operations, and duck into the air-conditioned interior. Kolya is in his office, sketching on a whiteboard. Smiling, he welcomes me to his office; I cannot resist breaking protocol between officers (he is a Colonel, after all!) and giving him a hug.

“Ah, Sacha, it is good to see you again. And here, I can promise you a beautiful day for flying!” As is his custom, he pours tall glasses of tea and I munch on slices of cucumber as we discuss the weather forecast. Kolya has many new toys with which to play; he uses a computer to project his maps onto a screen, next to the whiteboard I became so used to when we flew sorties against the IRLF.

“See here. At takeoff, you will have a maximum visibility of about eleven kilometers. You have fifteen hours of useful light from this morning’s sunrise, which was at 0618, and you can expect the sun to set at 20:32 tonight. It will be calm and clear today, winds generally east to northeast at eighteen kph maximum, but gusts at lower levels up to 30 kph.”

I took a sip of tea and considered. “It will be the best possible weather for a ground attack.”

“Da.” Kolya laid a finger across his lips, thinking. “But it will also present a perfect target of you, Sacha, for their antiaircraft gunners. Look at this.” He changed slides. “no cloud cover whatsoever, it will be absolutely clear but for the haze we always get. And once the sun goes down, if God forbid you are shot down, you have a half moon to contend with. I strongly recommend that you carry night vision goggles if you have access to them from the armory.”

Thus armed with knowledge of the conditions, I bid Kolya goodbye and head for the flight line, considering. Flight time from Adler to the target is measured in minutes; fifteen to twenty minutes flight time to get in position. About as long as it would take to fly to Suhumi. This will be a short mission.

I enter our locker room next to the aircraft shelters. In my locker, I find my VKK-15 flight suit and my ZSh-7 helmet. My flight suit allows me to dispense with the need for “speed jeans,” as American pilots often call their anti-G compensation gear, because these are built in to the VKK-15. It is comprised of a set of overalls, that have the necessary hoses and tubes, and a jacket. Both are olive-drab green, made of a heavy, canvas-like cloth. We do not wear rank or other identifying insignia on our flight suits, generally. I also have been known to wear a camouflage suit similar to that our helicopter pilots wear, along with a pair of PPK-1 G-compensation pants, which are identical to those American pilots use. We can wear the VKK-15 overalls over nothing more than underwear and a T-shirt, since we have the jacket to wear over it; the jacket even has a rain hood! I shrug into an American-made survival vest, and my Makarov pistol in its shoulder holster, over my VKK overalls. They fit nicely under the jacket. I also have a pair of Hi-Tec boots from my time with the Americans before, they zip closed snugly. I snap my KM-34 oxygen mask and my larynx microphone into their places, and pick up my bag, with my binoculars, charts, and my NPL whiteboard inside. All this stuff is heavy! But I would never fly without it.

I consult the Breitling wristwatch I have lately affected-it has many functions and can be read with night vision equipment-and see that it is time to fly. The hardened aircraft shelter is but a few steps away. Inside, ordered chaos as the aircraft handlers complete final checks. Vasily is beginning his walkaround, and I greet Lt. Kulikov, my plane captain, who shows me a clipboard with forms I must sign. I carefully walk around my craft; 11 Red and I have had many adventures together. I tug on the bombs and missiles on their racks, earning an exaggerated sigh from Lt. Kulikov-in hundreds of flights, never have I had a problem with an aircraft prepared for me. I have been lost over target once, because I was too careless and charged a Shilka gun over Suhumi in the IRLF war. I learned from that time to be careful.

My Brother, My Enemy Page 11

My Brother, My Enemy Page 12

My Brother, My Enemy Page 2

My Brother, My Enemy Page 4

My Brother, My Enemy Page 5

My Brother, My Enemy Page 8

My Brother, My Enemy Page 9