DCS Black Shark uses what is described as Staged Campaign System, or SCS. It is somewhere between a dynamic campaign that automatically generates missions, and a linear system that plays the same way every time. An SCS may consist of several stages and each stage may incorporate several (many) missions. Each of the missions is created in the Mission Editor and can have random variables and triggers all to itself. So this is a phased system and will not play out the same time every time, depending of course, on how many missions you assign to a stage and how many stages you have. The line of battle should move back and forth depending on performance.

Now, in the Campaign Editor, you get to choose how many stages your campaign will have, which missions you have created that will populate each stage, and a mission’s value range. Values are interesting. When you create a mission you can assign values to various triggered events within the mission. Could be destruction of a unit, reaching a location by a certain time, etc. There’s a scoring system and here’s what it is: If your completed mission falls at 49 or below, you go back one stage. At 50, you stay the same. Above 50, you advance. 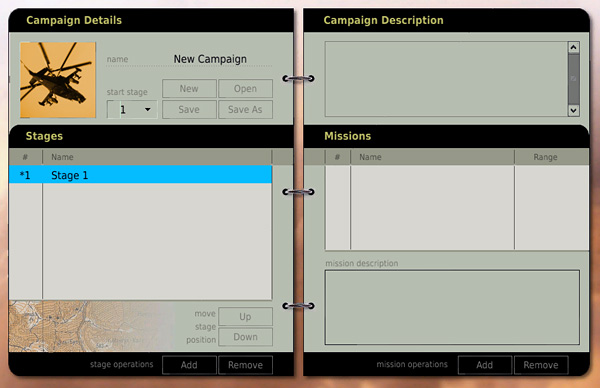 Some important things to note:

I think DCS Black Shark has gone to great lengths to provide an interactive environment that is both challenging and rewarding. The keys are in your hands. You have access to these tools, so use them. No doubt there will be people providing custom missions and campaigns and that’s great for all of us. Or you can create your own. See what a scenario might look like, who might fight with whom and against whom and what difference that makes. Build your forces, set your triggers and goals, and stages and let it sail. Might be great, maybe not.

But I’ll tell you one thing. The next one you do will be even better.