I feel that the biggest detractor from SSM2007 gameplay is the lack of keymapping. Aside from a few hotkeys to move between external and 3D cockpit views, a few critical landing-based commands, and the usual keys for Pause, Save, Load, etc., almost all SSM2007 actions are performed with the mouse. It’s pretty surprising that a high-fidelity simulation of this type has very few mapped keys, nor does it even have a provision for mapping game commands. It’s hard to imagine someone building a home cockpit for the Space Shuttle, but even having keys mapped in order to jump to all of the 2D panels would be a nice feature; the only thing close to this that does exist is a key for jumping to the last-viewed 2D panel. Thankfully at least the airbrake, wheelbrakes, landing gear, and drag chute can be controlled by the keyboard, so you don’t have to reach for the mouse while landing the world’s most expensive glider.

Some observations about the Commander’s Reference Manual’s comments regarding the quality of the terrain graphics: while SSM2007 is not on a graphics par with titles such as Crysis, I expected better visual quality with all SSM2007’s graphic options set to their highest settings. I suspect it’s very difficult for a space simulation to realistically capture just what Earth looks like from orbit without significantly increasing the system demands. The view of Earth from orbit is adequate, not beautiful, and SSM2007 ultimately does a good job of letting the player feel like they’re in orbit above the Earth, including accurate geography below the Shuttle.

Are the ground textures that you see on landing perfect? Again, no, but they’re representative of the respective landing areas. Edwards AFB is a flat, featureless terrain of the same color in the California desert. Kennedy Space Center, on the other hand is a much more rich environment. Landings at Kennedy look quite nice.

SSM2007 graphics are focused on what matters, which is the cockpit modeling. The 3D cockpit can shimmer often, but lots of AA and AF help and it is quite impressive to behold. All of the 2D panels are crisp, clear, and high-resolution, so as you do your work in the Shuttle the visual quality will not disappoint. A nice feature that SSM2007 takes advantage of is cockpit lighting, with the player able to control the state (on/off) and even the intensity of a number of panel lights that illuminate various cockpit locations, visible in 2D and 3D views.

As you can see from the control panel images, graphical complexity in SSM2007 also means providing a myriad of dials, switches and lights for the various control surfaces. 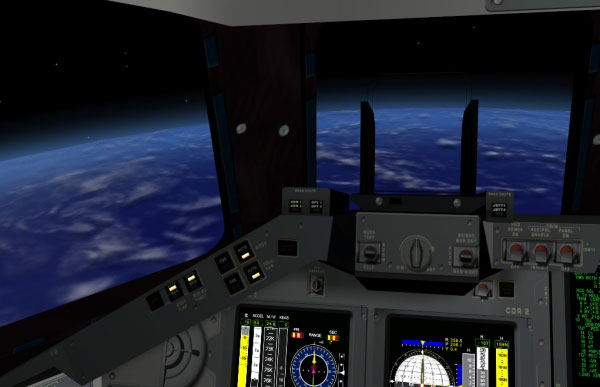 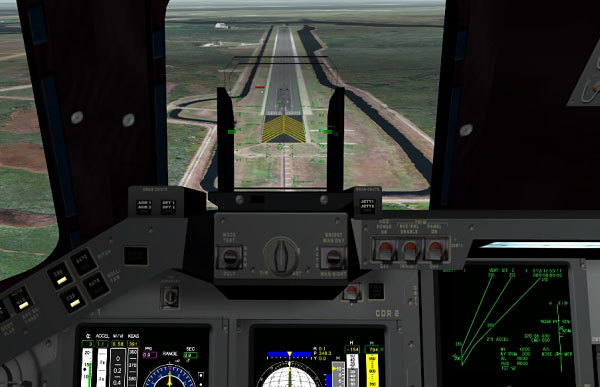 View While Landing at the Kennedy Space Center 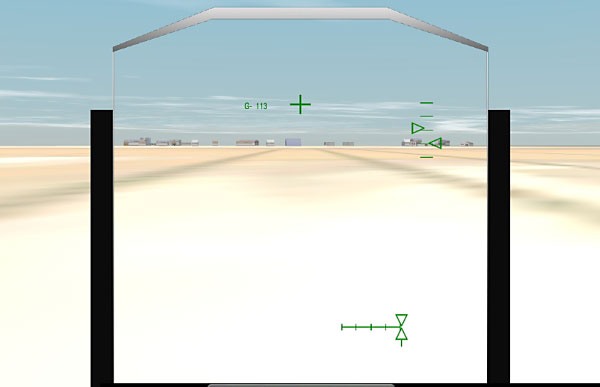 View While Landing at Edwards AFB

SSM2007 supports NaturalPoint TrackIR™ technology with 6DoF, which is a good thing. However, I found the benefit to not be as useful as say a combat flight sim, because managing the cockpit views requires drastic view pans. Setting the TrackIR to obtain enough motion to reach all of these points resulted in very sensitive inputs and unwanted view pans. I wound up disabling TrackIR for the most part while in space. There is a key command to toggle between mouse and TrackIR view control, which is nice. TrackIR is invaluable, however, during a landing. The systems you need to view (in addition to looking through the HUD) and the relative positions of the MFDs make it a challenge to keep an eye on all of the relevant information. TrackIR helps you to peer at each display carefully and then quickly zoom your view back out to look at everything else while keeping your hand on the joystick.

Matrox TripleHead2Go resolutions are ostensibly supported by SSM2007. However, the support is limited. Recall that SSM2007 takes its gameplay resolution from the desktop resolution. This means that the desktop needs to be set to a triplehead resolution if one desires SSM2007 to use that resolution. However, if TripleHead2Go owners use a single-screen resolution on their center monitor on the Windows desktop (in order to obtain true multi-monitor desktop usage). I use a single-screen resolution on my center monitor on the Windows desktop, and I am forced to change my desktop resolution every time I wish to play SSM2007 in triplehead. The lack of SSM2007 options to change screen resolution is inexcusable, not just for triplehead support, but also because this places a needless restriction on SSM2007 users.

The TripleHead2Go support is also not very flexible. I have CRT monitors, and thus I typically use my TripleHead2Go at a resolution of 3072×768 (3x1024x768). The reason I use this resolution is that it supports an 85 Hz refresh rate so that my CRTs don’t flicker noticeably. However, most TripleHead2Go owners use 3 LCD monitors each with a resolution of 1280×1024. This makes the most common triplehead resolution 3840×1024, and this appears to be the resolution for which SSM2007 was optimized. At 3840×1024, SSM2007 looks and plays fantastically. At 3072×768, the situation is a quite a bit worse; SSM2007 in triplehead mode appears to have been hard-coded for the 3840×1024 aspect ratio (3.75:1) and the overlays do not change to conform to other aspect ratios (such as 3072×768’s 4:1). This results in the mission timer and the checklist messages running off the right and left edges of the center screen, respectively. This means they are cut by the monitor bezels, which is incredibly distracting. There is a keystroke to move the overlays to the left screen, which helps. However, then the user has to stare over there while they play the sim, which can get uncomfortable, and some of the full-line-length checklist items still get cut by the bezel interruption.

I contacted the SSM2007 developers about this issue and was informed that the sim was intentionally developed to not support vertical resolutions shorter than 1024 pixels. For a sim that purports to be flexible and scalable, it is a very short-sighted decision to only support the highest triplehead resolutions made available by the Matrox TripleHead2Go. I asked about widescreen triplehead support (typical resolutions are 4320×900 5040×1050), since these resolutions have heights less than 1024 pixels, and received no clarification about how well these work with the TripleHead2Go.

Clicking the thumbnail links below will open a new window for each image at 3840×1024 pixels.