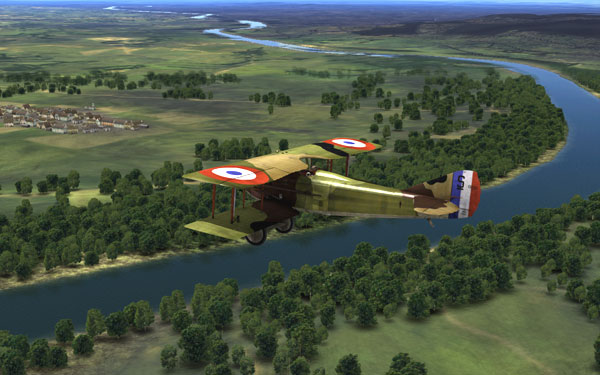 Every few years it seems a new round of WWI games and simulations make their appearance. It seems you’re either enamored with history about The Great War or you’re not. Count me in with those who are both curious and fascinated. Who remembers Wings of Gloryfrom Origin and Flying Corps from Empire Interactive? The granddaddy of WWI flight sims, Red Baron (and Red Baron 3D) by Sierra/Dynamix is arguably the best of the crop and still has fans for it’s campaign engine. The recent release of the latest CFS3-based mod Over Flanders Fields should be considered among the very best and includes a remarkable amount of innovative modding work.

Also there is TK’s Third Wire fun title, First Eagles built upon yet another rendition of the SF engine. There have also been some notable attempts that unfortunately didn’t see the light-of-day such as the 2004 stillborn title Knights Over Europe. But anyone who follows this vintage era of air combat aviation knows there has been a new title in development for the past 3 years. Starting as Knights of the Sky by Gennadich with the IL-2 engine, the title, engine and company name was changed to Rise of Flight (or RoF) by neoqb. Many of us wondered what happened during the lull between Gennadich morphing into neoqb, but upon the return of the team we knew development was moving forward.

SimHQ was fortunate to receive an early build of RoF recently from the development team. When offered, it was not anticipated the build would be much more than a pretty slide show with some flight characteristics. I couldn’t have been more wrong about my expectations. Early build yes, but there was enough content to see this title has every reason to warrant the excitement WWI aviation fans are anticipating from the final release.

Keeping in mind that everything shown here is subject to change in the final release, and this truly is a work-in-progress, lets talk a bit about what the version I received included. First, the installation went without a hitch. I just clicked on the setup file, allowed it to install to the default path, and it started laying-down files. Once finished, I rebooted. Now that’s not necessary (I know, I know) but old habits die hard and I’ve still seen recent titles that did not register correctly until the machine was rebooted.

Once WinXP came back up, I clicked on the “RoF Settings” icon and saw that my machine was going to be happy with moderately-high graphics. The settings will determine what your computer should run RoF as it’s default. Of course they can be raised or lowered, and like every simmer I tried the default then messed with maximum and minimal settings. Conspicuously absent was the textures and sound settings adjustments as both were obviously intended for a later build version. For this sim, I prefer a bit lower screen resolution but higher quality graphics. I saved my settings and ventured into RoF by clicking on it’s icon.

First, I created an account for myself then started looking around the main menu. The “Single” (mission) and “Campaign” menu text was available as was the “Profile” and “Exit” text. The menu text for “Training”, “Multiplayer”, “Options”, “Awards”, and “Statistics” were unavailable. The menus at this point are currently somewhat plain, but it’s evident neoqb is using a motif from the turn-of-the-century. Undoubtedly they will look more detailed in the future considering the excellent graphics work presented in other areas of the sim. Some nice visual detailing did stand out. The hangar interior 3D image is beautiful and interesting to look at all the interior objects as it rotates. 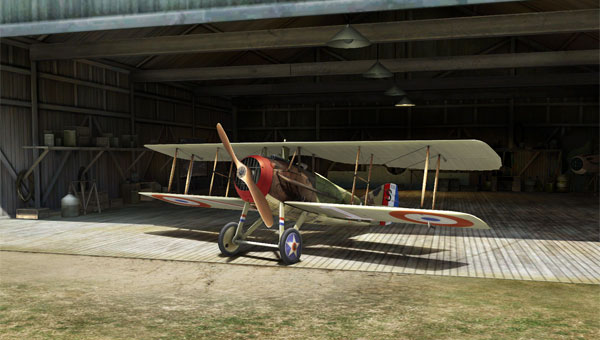 To start a mission, click on “Single”, then you select your plane and read the briefing on the mission you will be flying. There were 4 planes and 4 missions available to select in this build version (but there will be many more in the final shipping version). The mission loading progress screen is a reproduction of a well-known WWI painting that was later used as a poster promoting service in the Army Air Corps. One item that was totally unexpected — when going between screens the cursor turns into a pirouetting metallic-gold ballerina!Now this might seem odd for a military flight sim but in the context of recreating the history of that era, it was a unique but nice detail. Next is the mission settings screen. Among the items you can select are allowing gun jams, adjusting the radiator, and many other details unique to the planes of WWI. You can also select the amount of fuel, variable loadouts if it was available on the real plane, and which plane skin of various famous pilots and squadrons. Then there was something I have never seen included before in a flight sim. Soon as I saw it I thought, “Of course! Why didn’t someone do this before?” You can adjust the machine guns convergence point with a visual slider.Brilliant!

As expected, RoF will need a system with a strong CPU, video card and RAM. neoqb has the requirements for RoF already on their web site:

Here is the system I tested Rise of Flight on:

The resolution I found that worked best was 1280×800 providing the 16:10 aperture. At this setting I could run the graphic quality settings on high. A couple more technical notes to pass along. This build set both cores “on” by default in the CPU dual core affinity setting. Cool! neoqb development team member “=FB=VikS” commented in the SimHQ RoF Forum recently, “ROF have separated threads architecture, so two/four cores will work. Actually we have exact numbers of trials of core duo vs core quad, and core quad works 30-40% faster than core duo with ROF”.

Also, I may be the luckiest person who ever loaded this particular build version, but in flying it for hours I had one freeze when switching between screens. That’s it. For an early build of any software, that’s impressive. RoF was remarkably stable on my test computer.