Even if you’re a bit like me… can’t form up very well, lose your squad through disorientation, can’t follow waypoints, etc. you can still enjoy the quick thrill in the Quick Combats and dip your toes in the campaigns, flying bombers and fighters from numerous British, German, French and American Squadrons covering a time period from the start of 1915 to November 1918.

I did notice that some aircraft employed by some French Escadrilles are not yet available in OFF; e.g. Nieuport 10, Morane Parasol, Farman MF 11 and Caudron G4, but there are an almost endless number of French Escadrilles to choose from, so you will be able to fly extensively for France.

I mentioned this to the developers who were as yet undecided as to if and how to go about providing the missing aircraft.

It may seem a bit unfair of me to bring up this point when considering the scores of aircraft included in OFF, bringing you a massive 3600 unique skins — already there you have been pampered with more attention to detail than you’ll probably ever see in any commercial product — but I would hope that at least the Nieuport 10 be added, and also that as many of the missing aircraft as possible can be added over time in free updates, in lieu of the price tag accompanying OFF Phase 3; $50 USD.

I find OFF to be a purist simulation in the sense that the best and most realistic experience is to be had when doing everything in 1:1 time mode, i.e. not using the warp function that lets you skip from action point to action point. The single player experience as far as I can see leaves little to desire as just about everything you could ask for is there.

Taking the time to actually take off with your aircraft and gaining height ever so slowly while maintaining a constant speed and trying to keep up with your wingmen, is quite challenging. Perhaps it is due to my lacking skills or my system specs, but sometimes the wingmen seem a bit on the slow side, at other times they race ahead suddenly, making me try my best to catch up with them. 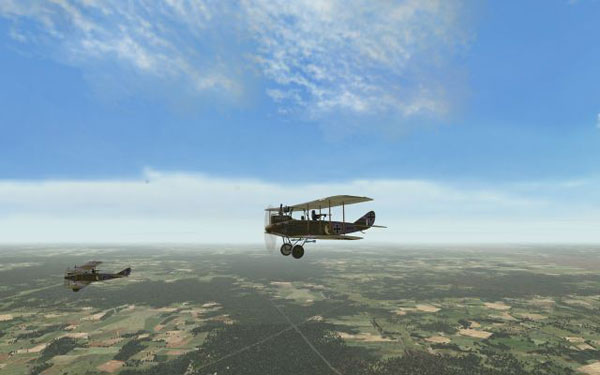 As you approach the frontlines you can hear the distant thunder of the artillery guns, see flashes on the ground, and finally you are greeted by ack-ack, Archie, anti aircraft guns, or whatever you want to call them.

At times you almost feel cold and lonely in your slow and fragile tri- or biplane, the engine-note producing a mesmerizing, hypnotic trance which has been my undoing on several occasions as the AI is very competent and seems to be very good at catching me when my guard is at its lowest and I expect them the least.

I found it a nice touch that when the weather report claims that all flying is suspended due to the weather, then all flights really are cancelled.

Into the campaign mode I was wondering where the enemy aircraft were as I had trouble finding them. Perhaps I was expecting something like the Battle of Britain, with selves full of enemy aircraft that I could take shots at. I even complained a bit to Polovski from the OFF development team that there “wasn’t much action”, but when flying a bit more I realized that spotting enemy formations or just a couple of single aircraft is quite tricky and that it would be unreal if I were suddenly to become an air-ace, a virtual Rickenbacker, Lufberry or Ball, when in reality I’m just a short-sighted very junior pilot. The number of times I’ve died from enemy bullets or being sloppy on the controls bear witness to this sim being serious about bringing the war over Flanders to me in a way that is as real as possible.

This also means that OFF will demand a lot of your time for you to obtain the best experience. In turn it will reward you by revealing more and more of its contents and details. This is also an expedient excuse for the reviewer to get on with this review and to get back to flying duties! 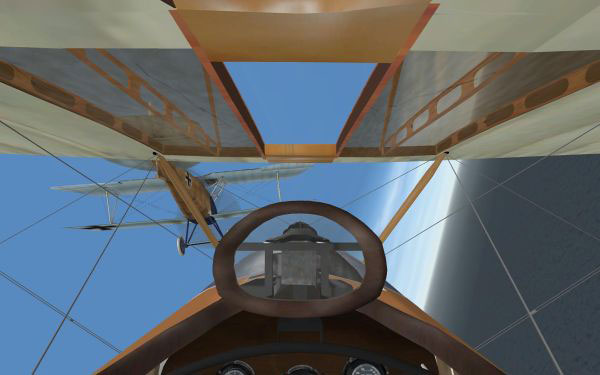 You don’t have to patrol the frontlines in order to secure “trade” as I found out myself thanks to my exploits in a Pup over the coast. Barely leaving the coastline behind my flight encountered four enemy airplanes and we engaged in what was to become a furious scrap immediately. I was lucky to have brought the camera and having the wits to click the camera trigger although at times this meant I forgot to pull the gun-trigger!

To my delight we downed all the enemy airplanes, I think, but sadly we lost one of our own brave pilots.  During the fight I was amazed to see how I was able to work with my own pilots, as we had the last surviving German aircraft in cross-fires on several occasions! Absolutely ruddy marvelous, although I’m still waiting for my first kill as I’m still a lousy marksman and these planes are really difficult to down. You have to get very close and hit something vital with your bullets; the engine or the pilot.