Anyone who follows the Yankee Air Pirate 2 series knows that the storylines are based on real air combat events during the Vietnam conflict. But in each mission there is a “story behind the story”. We will be asking YAP2 founder John “zerocinco” Shelton his favorite missions and ask him to tell us the best “behind the scenes” stories from various YAP2 Mission Sets. Then “PFunk” or “20mm” will fly the mission and tell us about their experience. For the first installment, we present favorites from Mission Sets 1 & 2.

Note: The “history” text is excerpted from individual mission briefings located in the Members Area of the YAP2 web site, and reprinted with permission.

In “retaliation” for an attack on US destroyers in the Gulf of Tonkin, President Johnson ordered a raid on all PT boats and fuel supplies (POL) in an operation called Pierce Arrow. Crews hit Hong Gai near the Chinese border. They hit the fuel depot at Vinh, the PT boats at Loc Chau and Ben Thuy near Vinh. And they hit the PT boats and docks at Quang Khe Ferry. Being the closest to Yankee Station, it was the first hit.

I was stationed at Williams AFB in Arizona. We would fly our cross country training missions on the weekends. The instructor pilots always wanted to go to San Diego so we would fly to Navy North Island. On my first flight in a T-37, I parked beside some A-4s in from the fleet. The guys around them were only a few years older but centuries more mature. Being student pilots, they paid no attention to us. Later that night, we were at the Marine Corps Recruiting Depot Officer’s Club. Women came there to meet men.

Men went there knowing that to be the fact. Two of the Scooter pilots were there and butted into their conversation which was about a guy named Alvarez who had been shot down on a mission off the Constellation at the same time that one of them had launched from the Ticonderoga to bomb the Quang Khe Ferry. He seemed to know about all the strikes that day, who went where and about what happened. They told me about a dozen stories of the adventures of the A-4 Skyhawk in Vietnam up until 1968. I remember two things clearly: He said he had never been shot at or had shot at anyone and firing full-on live ammunition at a thing on the ground was a strange sensation. I also remember that he and the other guy stopped telling war stories when two women walked in that met their specifications. They stuck me with the bill and went over to where the women were.

I sat in my Scooter on the deck of the Ticonderoga twiddling with the radar and such. Flight lead blasted off the adjacent catapult and soon disappeared. Meanwhile, I was trying to keep the briefing in my head. PT boats have guns. Don’t get too low. Got it. I launched and was soon on my way in. Cloud cover was about 5,000 feet and I tried to stay beneath that. At about 20 miles, I started getting radar returns on the coast. I armed up one of the four LAU-61B rocket pods I carried and prepared for combat.

I had decided to come up the mouth of the river rather than fly across it north to south like the rest of the strike flight. Soon I was picking up targets visually, the PT boats on the left. I wasted so much time on the carrier deck, the first wave of strike came in before me and took out a couple boats. Now it was my turn. I hit two sampans and pulled off target for another pass.

I remembered that there was a fuel tank on the south bank, so I banked left and came in for another run. Unfortunately, I forgot about the admonition in the briefing about don’t get low. My parents will get the Purple Heart. 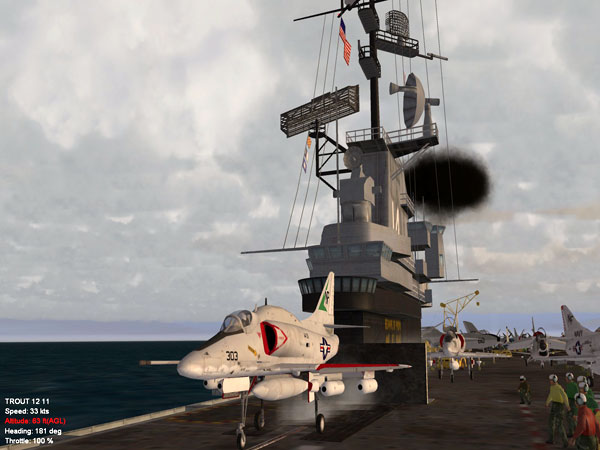 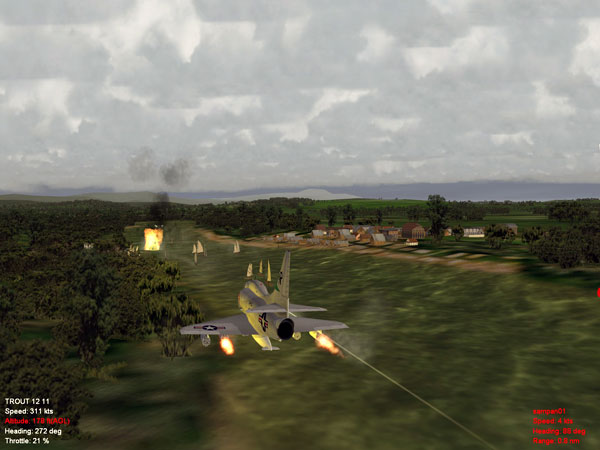 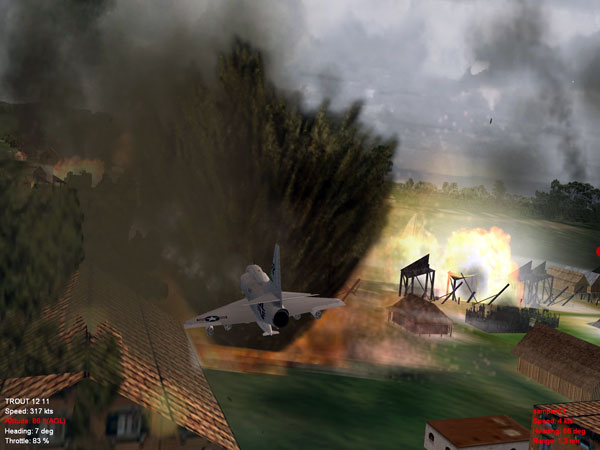