The Viet Cong were brave and determined but to fight a war against America takes tons of supplies. They say that amateurs talk about strategy and professionals talk about logistics. The supplies came down to trails through Laos but they came down the coast as well. There were always little boats full of weapons taking the chance that they could land their cargos ashore. If spotted, someone went after them.

I sometimes laugh at our mission names. Song Cau is a town where this mission occurred. There is no way that any jet pilot would pay attention to that. All the Scooter pilots knew was that it was in the first cove just south of the airfield at Quinon. A FAC had been driving by and saw activity on the beach that did not look like fishing. He flew over the ridge and called for air. They sent him the Marines.

Marine Air is for the support of their grunts. Marines were light infantry with little artillery support. And they could count on their pilots to take care of them. But every airplane ready to fly was fair game for Saigon and the Marines at Chu Lai did their share of interdiction, too.

This mission is a favorite because it is so real. As it began to reveal itself to us as we built it, it became one of those missions that any fighter pilot would recognize… a surprise attack on ground activities. The guy who told me this story and the one about the Cau Tre Bridge, was a Marine A-4 pilot at Chu Lai. He was introduced to me by a guy who was a grunt there. They had met flying sailplanes in the High Desert of California. We traded a few tales more to describe where we thought some great beaches were in the world. We all agreed that Vietnam might have the best ones as yet not ruined. This story is not a big raid but it is more like what went on than many of the others. Like I said, people tell you what is on their mind and big, scary moments are easier to remember than driving down the coast to shoot up some boats and bikes. I am grateful for a tale like this.

Today we’re going to fly south down the coastline as we look for some smugglers supplying the Viet Cong with much needed supplies. We will deny them this. We will be aided in this mission by an FAC, Dallas. He’ll pop smoke over the target area which should make things much easier. Our flight is Python 11 and 12. I’m 12, flying an A-4F Skyhawk equipped with 2 LAU 3/A rocket pods and 4 CBU 24 B bombs. My first task is to play follow the leader behind Python 11. You’d think I could do this, but I’m backwards at times. I press the Y key and finally locate and form up behind him. It’s a long drive folks on this mission to target, so it’s important you stay with your leader. Naturally I lost him in a cloud bank close to target, but by then the FAC had already marked for us.

I had been warned to watch the sampan with the .51 gun, and so my first pass was on him. I took him out with the first two rockets. There was another sampan on the beach and some supplies nearby and I took those out with rockets. There were Viet Cong and trucks and such in the smoke mark and I switched to the CBU’s for those. Worked fine, but I forgot all that small arms fire they had and they stitched me up pretty good. No functions lost though, so I took two more passes in there, ran out of bombs and rockets and called it a day. 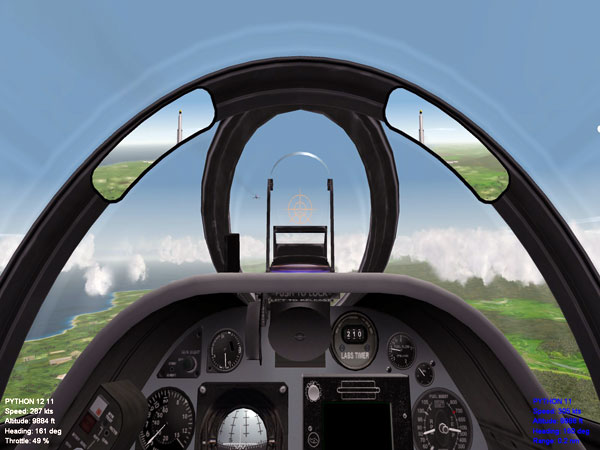 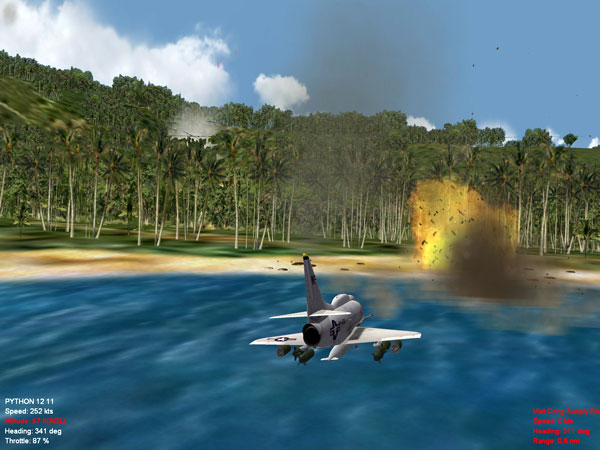 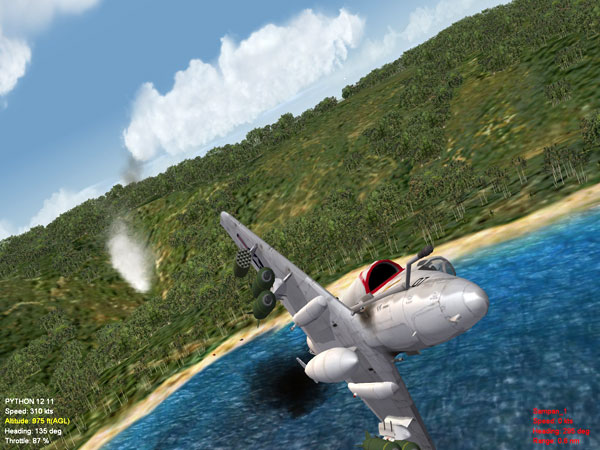 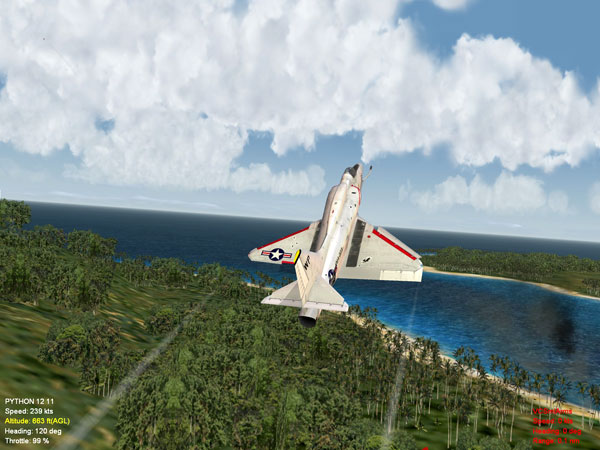