With the decision to allow North Vietnam to receive supplies without being attacked, the only other option to prevent them from reaching the enemy was to stop them on the Ho Chi Minh Trail. The traffic ran almost entirely at night so Night Owl was formed to specialize in night interdiction techniques. This is one form it took. We will show you the others on another night.

I flew this one and one of the other Night Owl missions. We like to stress the fact that much of the war went on at night. We were required to be able to fight everywhere all the time. Hitting the ground was always a possibility and I lost several friends to that small error.

You would rendezvous with Night Owl, usually right after leaving the tanker. Night Owl was a FAC. They located the enemy and the brought you in to hit them. In a later mission, you just drop on the wing of the Owl when he drops on a LORAN fix. In this one, he had mentioned a formation of the river that we should try to get a glimpse of in the moonlight. No joy. So he flared the place. We could see the spot he had in mind and they had a very good clue that we were going to bomb it. The sky was red with tracers. Madder than hell, I guess. We dropped our ordnance but I didn’t look to see where it hit. I was convinced that I needed to stay aware of where “up” was.

We tell this story as if both the Owl and the bombers were from Ubon. The LORAN mission had the bombers correctly coming from Danang. We chose to start it there because the timing required comes down to one crucial second. There was no way we could do it and stage a long ferry to join up. I don’t think anyone cares that they missed 300 miles of flying in the dark.

Let me just begin by saying I’ve never flown a mission like this one. Ever.

I’ve not been able to find a sim quite like the Third Wire series that really relates what flying at night is like. You cannot see a damn thing.  Seriously. You’re doing a LORAN drop and you’re dropping CBUs all over enemy positions.

See that guy with the green lights out of my cockpit window? Yeah, that’s the Night Owl FAC, you get to drop when he says so and it all comes down to split second timing, maintaining proper airspeed, and just blind-ass luck.

So, the world is calm (and black as pitch) around you and it seems like nothing’s happening until literally you’re almost on top of the target, say about five miles out. Then all hell breaks loose. I’ve been flying this sim for a while and I’ve never seen AAA fire this aggressive and thick. You have no choice but hang in there and pray you see the drop in time.

On the mission I flew, you can quite easily see that I was lit up like a pinball machine. 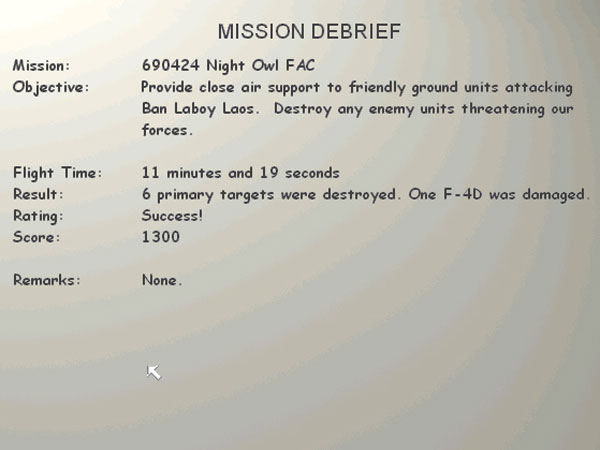 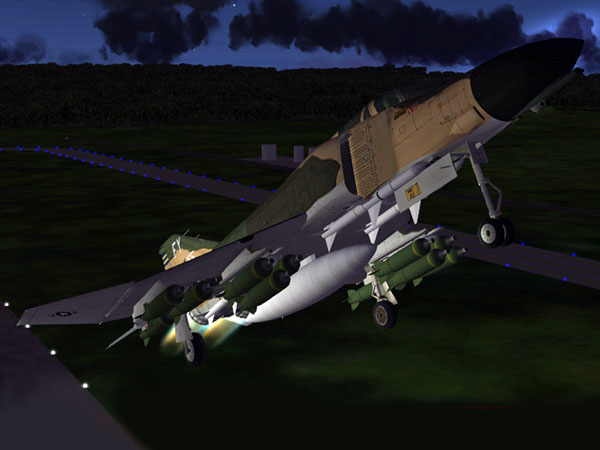 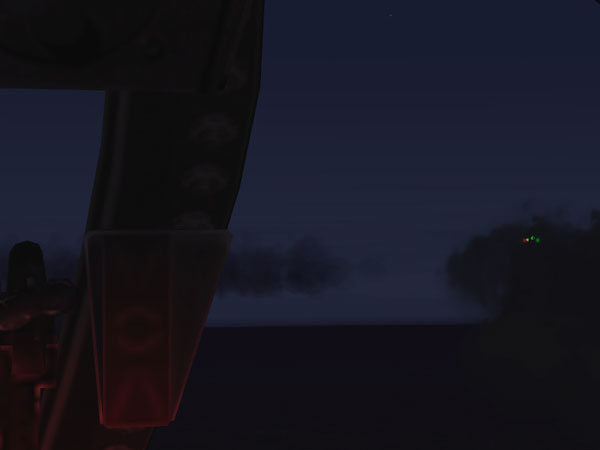 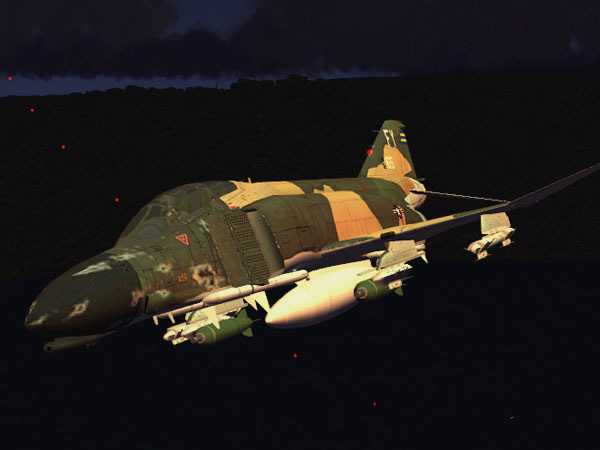