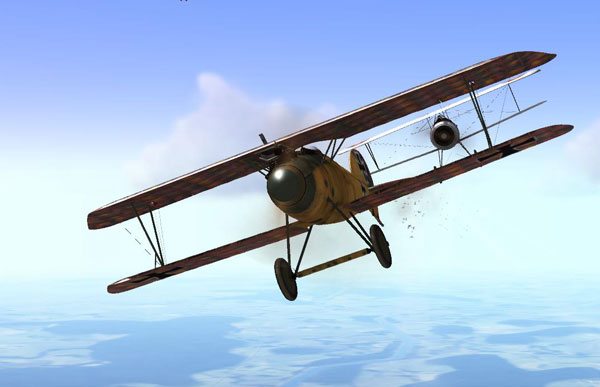 Normally a review starts with setup, menus and options, modes of play, and then gets to the actual playing of simulation, going through the Holy Trinity: Flight Model, Damage Model, and Artificial Intelligence. Rise of Flight is different from just about every flight sim I’ve tried though (and I’ve been around since the original Red Baron and Chuck Yeager’s Air Combat) and to capture it, one really has to go straight into the virtual skies.

I’m no expert on WWI aircraft, but I have been to Rhinebeck, New York three times to watch some painstakingly rebuilt / recreated WWI aircraft fly and engage in demonstrations and mock dogfights. I think I’ve bought every made-for-WWI-from-scratch flight simulation made for the PC as well as read a book or two on how the actual guys did it. Rise of Flight nails it. There is a feeling of rightness in the Flight Modeling that is shocking when one takes one of the planes in the air, from stalls to slips to the gentle deadstick glide that overshoots a meadow right into the trees. The forums are full of real pilots that rave about it as well, so I guess I’m not too far off of the mark.

A lot of that sensation of flight goes to the graphics and sound engine, which are both detailed enough that even on low settings give one a very credible feeling of altitude and airspeed. The ground really does rush at one in a dive, and if one flies along a river at fifty miles an hour the trees look like they’re going by at fifty miles an hour.

The sound of engine and wind over canvas and through wires change right along with the pictures — I can close my eyes while flying the Nieuport 17 and tell my airspeed and RPM’s just by the mix of the two through the headset.

These crates are both fragile and unbelievably strong, depending on how one goes about damaging them. Twenty rounds that stitch across the fuselage and an upper wing don’t do a lot; one is shooting holes in a ship’s sails. Unless one got a spar, in which case it might hold until one gets back — or begin to flutter and peel the top wing off the plane in a horrible slow motion on the next turn or roll. The same twenty rounds into the engine or the cockpit and they go plummeting, sometimes with dramatic flames darting from under the top wing and sometimes in slow, wide spirals, the pilot slumped low. Or limp back to base, engine missing and the pilot sluggish at the controls as he’s wounded. 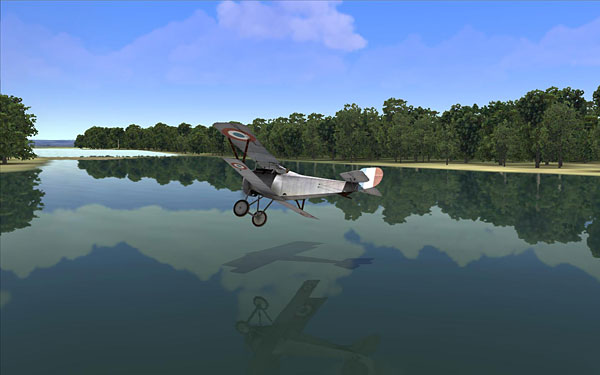 While the wounded graphic (which many have referred to as the “Eye of Sauron”) leaves something to be desired, being wounded effects the amount of input one can place on the stick and rudder; when a player is severely wounded the stick can barely be moved at all! This makes for some great near-unconscious type landings.

I did a very hard landing on a road and wound up flipping it over in a very spectacular ground loop (not an unusual maneuver for me) only to notice that I had bent one of my wheels. That’s attention to detail.

This is an era where pilots sat next to great bins of machine gun rounds and hand selected each round for their belts in an effort to reduce the chance of jamming the guns, something that only improved their odds slightly. The same is true in Rise of Flight, where jammed guns are a fact of life. Firing in short bursts and clearing the guns often is the name of the game! Ammo counts are low, effective ranges are very near to the nose, and so getting closer is the only way to ensure a hit. 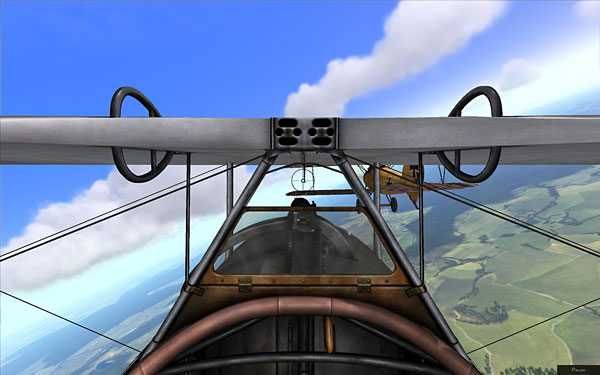 The Artificial Intelligence is held to the same FM / DM constraints as the player, with their accuracy waxing and waning with updates (at release they weren’t any better than myself; at first update they went to the School of famed aerial marksman René Fonck; in the latest update they’ve split the middle and are good, but not great). Like all AI, they fly with perfectly tuned engines and coordinated turns, but they make mistakes, too. I’ve been saved by more than one AI over diving his airframe or engine and having something break. They get into stalls and spins if they press the envelope too far. Tail gunners don’t fire when their planes are banking hard or aggressively diving. They seem to see through the clouds. If their plane is faster than yours, they will extend and set up slashing attacks if they have the advantage. If you have the advantage, they will try desperately to keep the nose pointed at you and try to egress at the same time. They will flinch away from a head on attack. While flying in multiplayer with a squad mate we could not tell when our opponents were human or AI; this is the mark of a great AI. 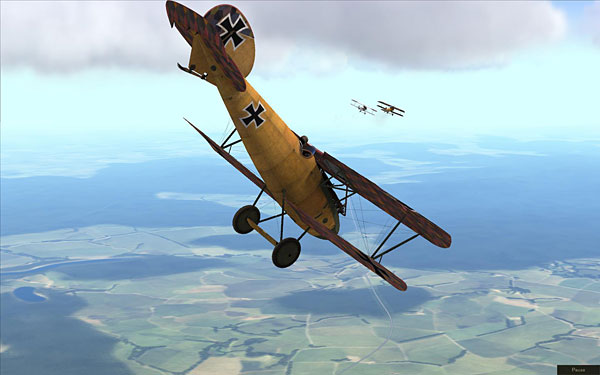 Flying and fighting in Rise of Flight is some of the most frustrating, exhilarating stuff one can ever do on a computer, which is why for all its faults can become addictive. Addictive in the “good in bed / can’t stand to talk to otherwise” sort of way that person you dated back in your mid-twenties was. Except it won’t dent your car, you get to keep your favorite jacket, and it goes away until you decide you want more…