This is neoqb terminology for “Campaign,” and they’re actually not bad at all.

First, one selects a plane, with a helpful picture of each one (I chose the Nieuport 17): 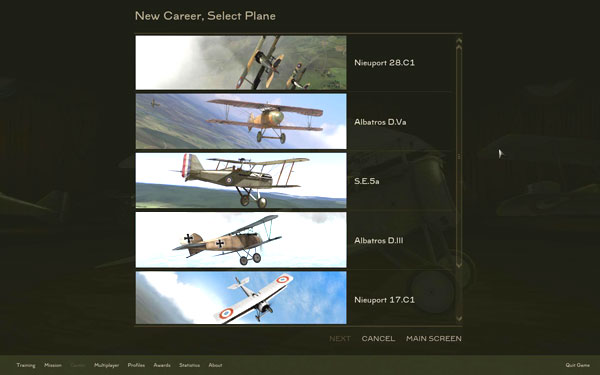 Then one picks a squadron (I chose Escadrille 87, as its symbol looks a lot like the US Army Eighty First Division patch): 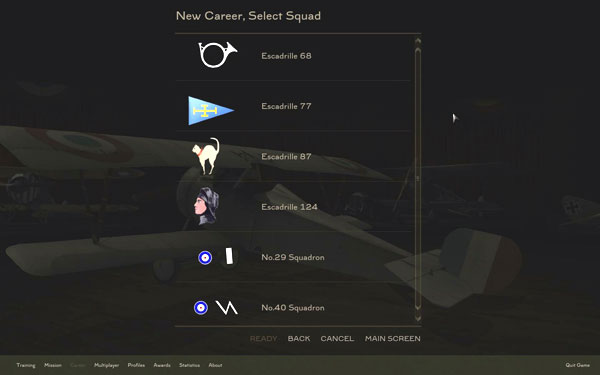 Pick the settings (I chose short missions, which put me close to the front and relaxed a couple of the difficulty settings): 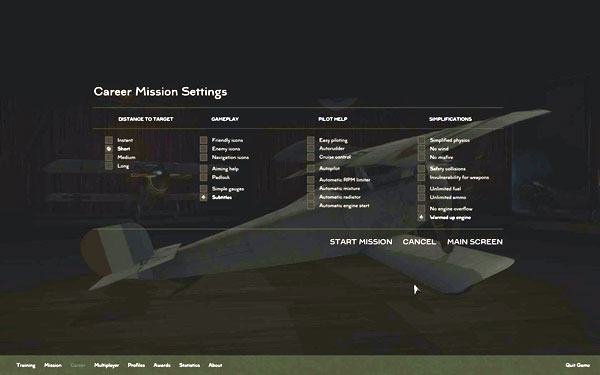 And you’ll get your campaign started.

This is where one of my eyebrows elevated slightly, as I had picked my squadron before my “distance to target.” I’m far from an expert in the orders of battle or who was at which aerodrome when, but it was clear that the fine details of historical accuracy were about to be somewhat ignored. I’ll take it on faith that I would be in the right sector of the front, but I wouldn’t bet an Internet dollar on the 87th being at the aerodrome I drew in 1917.

In fact the initial selection of the 87th is about as deep as one gets into squadron management or interaction. The default skins are missing the squadron mascot as a decal, which was also disappointing; it might be historical that they were left off in the French Air Forces, but if one is going to err on the side of player immersion, one would think they’d of at least had an option of sticking it on.

I don’t mind starting out as the Junior Pilot, but it would have been nice to be able to transfer in with the option to lead a wingman pair or the flight. There were a few times when I was waving like crazy to Capitaine Le Idiot that there was an enemy flight in sight, only to be ignored as he dutifully flew the patrol pattern around the patrol area.

Mission briefs start with the map, which is pretty good in detail and straight forward in symbology: 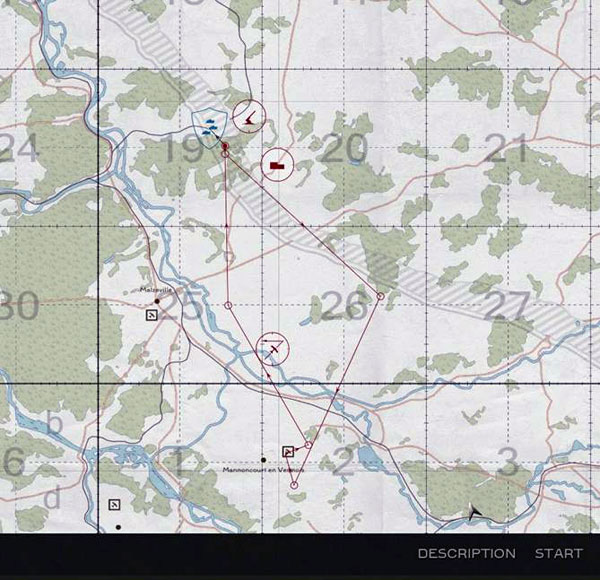 This is cropped, obviously, but it’s nice that they put arrows on the waypoint lines to let one know which way leads to waypoint one. I must confess that in the IL-2 series I bat around 600 in guessing which line leads to the initial waypoint, and if it wasn’t for the PVI-800 I wouldn’t do much better in Black Shark.

Clicking the description pop-up displays the text of what’s to be done: 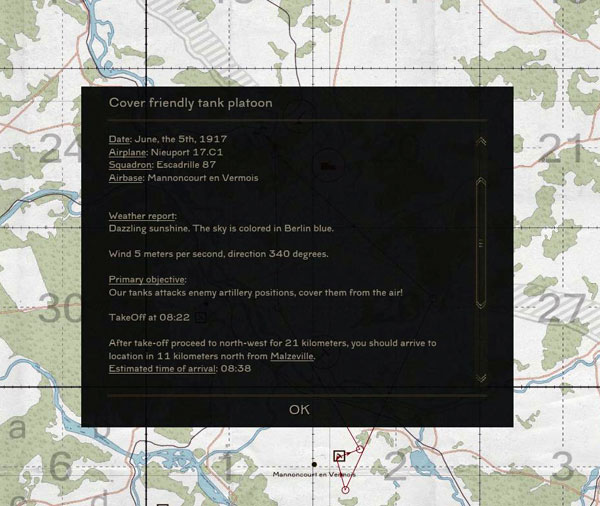 Scroll down and one gets the laundry list of secondary objectives: 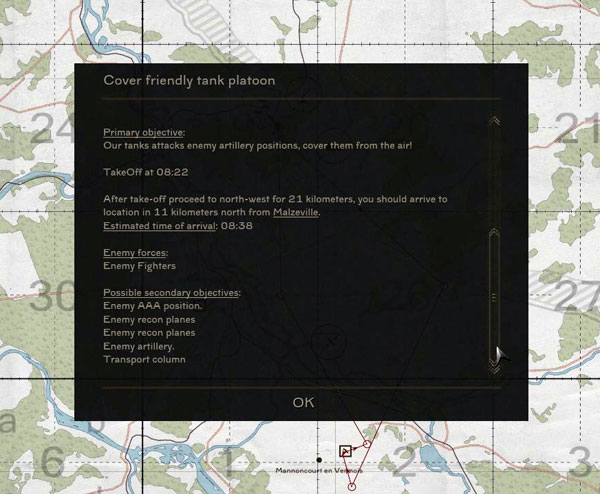 My poor little Nieuport 17 doesn’t carry enough ammunition for more than one of those, and if I get in the thick with some enemy fighters not enough for any of them.

Oddly enough, they don’t show up as distractions until the main objective is met, though one will see other enemy planes (and other flights engaging them along the way).

To the bottom left of the menu bar on the lower part of the screen is the “Hanger” option, where one can change skins, fuel loads, ammo choice and gun convergence: 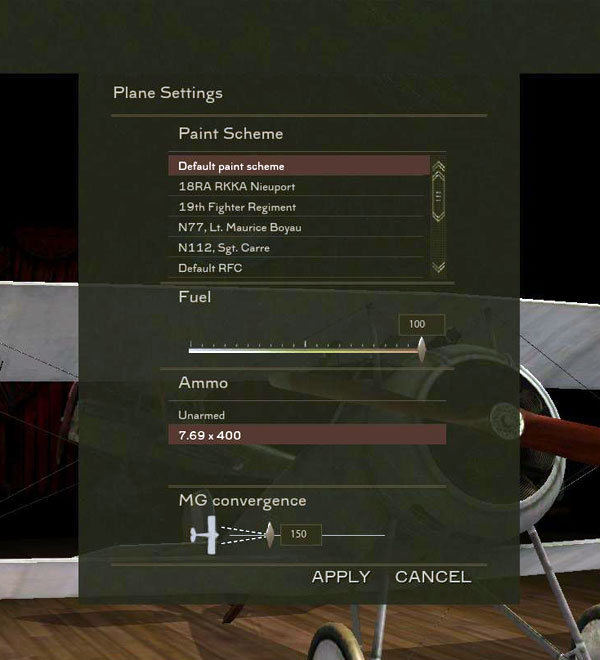 One can also read the specs of one’s plane. Sigh. No 87th skin to chose.

So, enough of this, let’s fly the mission!

I’ll spare the story of the flight, except to say that we encountered a flight of Fokker D.VII’s getting pwned by some SE5a’s on the way, everybody on the ground was shooting flak at us, and our flight not only accomplished the primary mission but made it home as a group. I actually ran into one of the recon flights, but as I was out of ammo couldn’t do anything but shake my fist at them.

Sound like a super condensed version of the events? It’s a novel compared to:

No map overview, no squadron results, no career tally to go with it (one has to go to the main screen’s “Statistics” tab for that). Just a nice way of saying I flew for near an hour and a half and shot down one plane. I actually took a stab at that convoy, but only had enough ammunition to destroy one truck, so no credit for that; I guess it was all or nothing.

I found out later when checking the “Awards” menu from the main screen that I actually earned a medal on this mission. It reminded me of the time that I was “presented” an Army Achievement Medal by way of an inter-office memo envelope that was stuck in our section’s mail cubby with my name on the outside of it; a nice gesture cheapened to the point of a laugh (it was a screw-up on the part of a new clerk; the package was supposed to go to the Fire Support Officer, but he addressed it using the only name he knew, the one on the award itself).

I don’t want a cut scene for getting a medal, but a pop-up message acknowledging the fact that I got one would be appreciated. I risked having to refly the whole mission if I failed!

It was super nerve jarring to watch those tanks roll over the front with explosions going off all around them, though! WWI was horrible enough in the air; not in a million years would I ever have some dream to be down in the mud back then.

The next mission is pretty much the same drill, with different objectives and random events. The air and ground to and from the target was pretty quiet, but there was a few things going on here and there, from friendly truck convoys to the aforementioned air battle.

At any rate, the missions are okay in variety and action, the after action reports are painfully sterile, and the squadron management / interaction is non-existent. I usually make up names and back stories for my bot squaddies, tracking them with my memory, so the latter doesn’t bother me too much.

For those who really get into having the stats and progress of bot wingmates tracked it’s a real crusher, though. The chance of working up a good hate for a certain AI squadron member that routinely stole kills, collided with one’s aircraft, and even shot one from time to timebut still would not die in a mission is zero.