Setting the countermeasures should be done on the pad before takeoff. Here’s a picture of what each switch does: 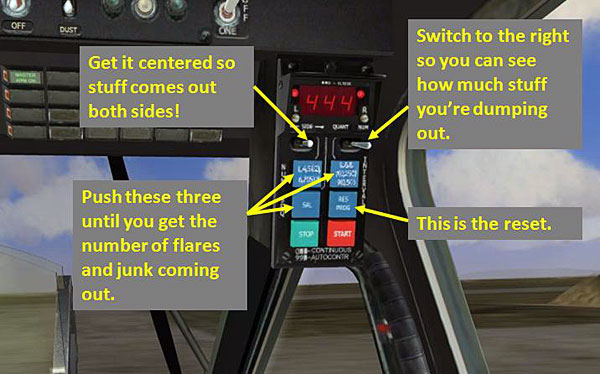 I don’t screw around with this, and have them pop out both sides in sets of three. When our babe Ekran* advises of a missile launch, pop the countermeasures (I have a toggle for this on my X52Pro) and try to put something between yourself and the missile if at all possible.

Beeps, boops, and sirens are all part of flying the Ka-50.

The beeping with the yellow flashing square is the Too Much Fun warning, meaning you’re maneuvering or flying too aggressively. If one descends too fast and actually outruns the lift of the blades (a unique form of stall), press the stick forward to get out of one’s own wash (or, if too close to the ground or a hill for that, left or right).

The red flashing light with the klaxon sound is the Way Too Much Fun warning, meaning one is (usually) exceeding maximum speed for the blade pitch, which can lead to a self rotor strike or a fire someplace. Lower the collective and bring the nose up a touch to slow down, or react to a fire. 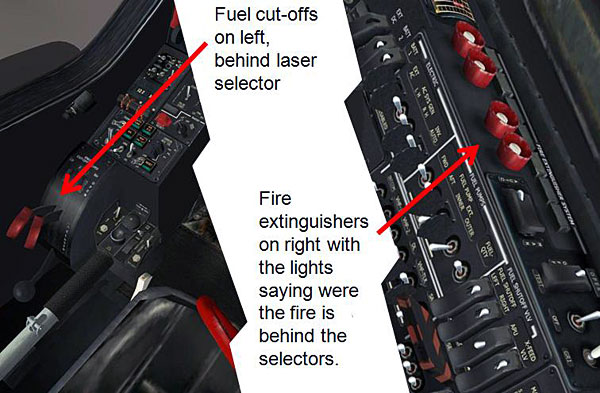 There will sometimes be a boop or beep that seems random. I typically ignore them, as it’s usually that I’m below the default minimum altitude, which brings a warning sound.

Ekran* will sometimes say to lower gear or to watch her, but I ignore that, too. She’s just wanting attention, the little minx.

There are a few switches that fall outside of everything else discussed that are either need to know or really cool to know.

Navigation and formation lights are the switches here: 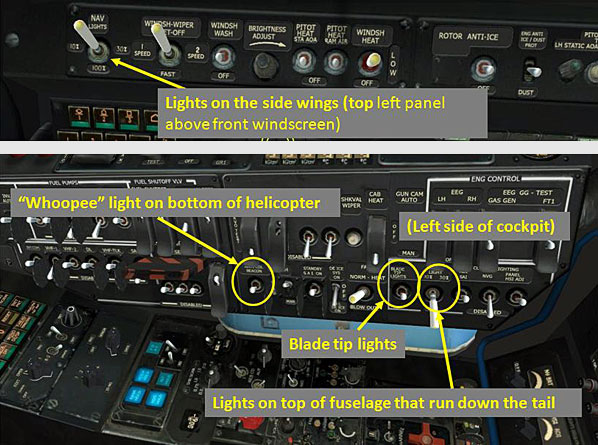 The searchlight is really cool. I bound a simpler key to it and made the upper hat on my X52Pro to slew it around. I’m working up a mission where one has to use it as part of the campaign I’m working on as an homage to the COPS television show. I also like to hover outside of buildings and shine the light at the windows.

The windshield wiper selector is on the top center control panel above the front windscreen. It doesn’t do anything right now but go up and down, but one can put it on the bottom of the HUD as homage to the FW-190 in the IL-2 series. Sure it’s a lame inside joke that only I can see, but I’m easily amused.

The inside cockpit light is to one’s rear on the left hand side. Since there aren’t a lot of switches I press, particularly since I use the automated startup, I like to flick it off and on once power is working to feel like I’m really doing something to get things going.

I rebound the door key to something really simple (“d” in my case) and like to pop it open when coming in for a hovering landing. I don’t think one can lean out of the door, but it gives a nice view of the ground.

While I’m pretty confident someone will tell me I have something wrong in how I understand the simulation or the name of something, for a stick-and-rudder man such as myself, the whole complex system comes down to these few buttons and selectors:

Start up; shut down; gear up / down; cannon, missile, rocket selections; weapons release; cannon fire; Shkval: on, cage / uncage, zoom in/out, lock and slew (x4); helmet sight down / up; trimmer; trimmer reset; communication menu (since the menu is on screen after that I consider it really only one command to remember); and countermeasure start and stop.

Most of the above can be programmed into a HOTAS; of the above I have only the start up, shut down, Shkval cage / uncage, helmet sight, weapons selections, and communications menu on the keyboard.

It’s not much to learn, and it will get one through the day without having to crack open a single page of that big manual or memorize a single checklist. Not to say I’m passing on buying the bound manual, mind you, as I want to have the appearance of being hardcore.

Here’s my X52Pro Setup. One mode, nothing fancy, and it gets the job done. 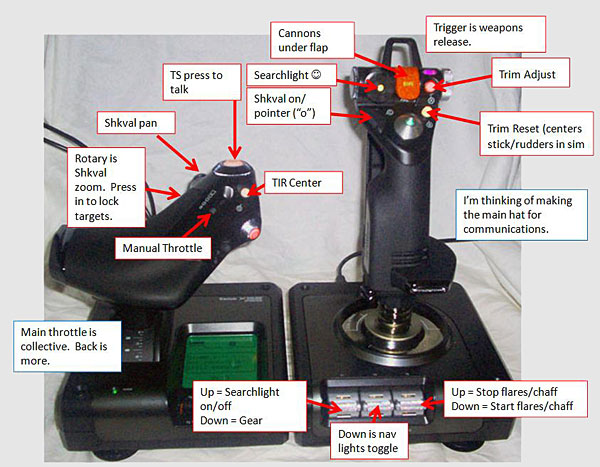 * Note: I know that Ekran is the little TV screen above the map screen and the Betty isn’t named Ekran, but that doesn’t stop me from referring to her as such. Within my copy of DCS: Black Shark, she is also a redhead from St. Petersburg that likes wearing high heels, black miniskirts and fire engine red lipstick.