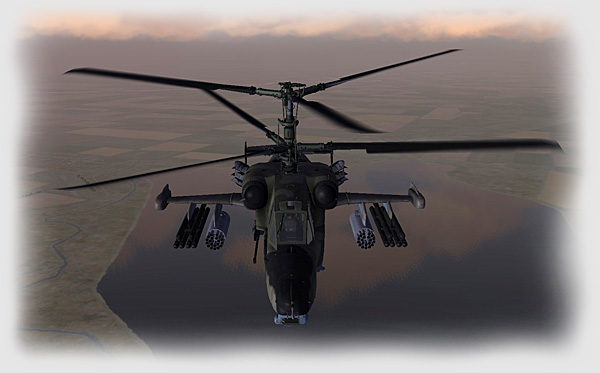 Now that we understand how the Trimmer works, let’s look at its companion system, the Autopilot.

Unlike conventional fixed-wing aircraft, on a standard helicopter the lift surfaces (the rotor blades) are also the primary control surfaces. Some helicopters have tail planes and rudders, but these surfaces simply supplement the dynamics of the rotor blades. Many of the Ka-50’s moving parts are connected to the rotor blades and, through rods, levers, hydraulic lines, and black box magic, are also connected to the control inputs in the cockpit (cyclic stick, rudder pedals, and collective lever). This enables the pilot to change the pitch angle of the blades from within the safety and relative convenience of his telephone-booth sized cockpit. However, coordinating the motion of all those moving parts with the rotor blades under the dynamics of real flight is awfully complicated, so the Ka-50 includes a hand-dandy autopilot to help the pilot out.

According to the DCS: Black Shark web site, “the autopilot system is integrated with the targeting and navigation systems and it produces control input for automatic flight system for deviation of the helicopter from the assigned attitude and altitude”. Unfortunately, a little more information is needed to fully understand and properly implement the Ka-50 autopilot system.

The autopilot in the Ka-50 has two basic purposes:

1) Help pilots get to where they said they want to go, and…

There are many folks who not only disbelieve the second point above, but claim that the autopilot is “of the devil” and designed specifically to kill pilots, so let’s review that point first.

In aviation there is a phenomenon known as Pilot Induced Oscillation (PIO). A PIO occurs when the pilot makes a series of control inputs in opposite directions quick and strong enough that a coupling is made between the aircraft dynamics and control inputs resulting in the aircraft responding much more strongly than the pilot expects. To the pilot, it seems like the plane has gone crazy, exaggerating inputs or even reacting exactly opposite to them. Increased efforts to control the airplane actually become counter-productive, and can result in a very wild ride. PIOs can theoretically occur in any control axis but one of the more critical places they happen in fixed wing aircraft is in the pitch axis on a landing approach. While attempting to control descent rates by use of pitch controls, the pilot can enter a PIO while trying to alternately chase descent rates and airspeed. PIOs at low altitudes on landing approach can and have resulted in crashes and deaths. In a helicopter, which is inherently unstable to begin with, PIOs can also occur during transitions to/from hover or at a number of other times where it is very unsafe to lose control.

Good pilot training helps prevent PIOs, but modern control systems are designed to prevent them from even being able to happen in the first place. Some control systems have a function that dampens or filters control inputs from the pilot to the control surfaces, “smoothing” the pilot’s inputs, making it much more difficult to enter a PIO. Some pilots feel that stability augmented controls are less responsive or more spongy than non-augmented systems, but they do result in smoother aircraft responses, increased stability, and fewer PIOs.

As an historical example, the 1992 crash of a prototype F-22 jet fighter was linked to an incorrect control system response setting that resulted in the controls becoming much more sensitive than the pilot expected, enabling the pilot to enter a PIO and strike the ground. If the proper control setting had been set, the test pilot’s inputs would have been dampened and it is unlikely that the pilot would have entered the PIO and suffered damage to the aircraft. 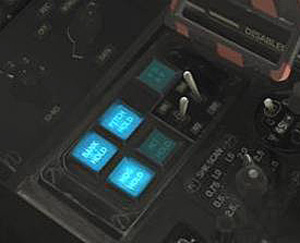 Autopilot control feedback is like having a second pilot also holding the controls and making control inputs in addition to your own. While this sounds neat, having these two different inputs can result in situations where the autopilot input counters pilot inputs if they try to maneuver the helicopter away from the assigned state conditions (e.g., changing pitch). The Ka-50 implements two methods to help avoid entering this unnecessary situation.

On the other hand, if the assigned heading is to the right and the pilot is providing or has trimmed in 20% more left rudder than the autopilot needs to make that turn, the autopilot won’t be able to achieve the assigned heading. Having a difference of greater than 20% control between the current trimmed control settings and the amount of control feedback required by the autopilot to achieve the assigned attitude/altitude is a common and nearly undetectable problem for helicopter pilots that are not aware that this conflict can occur as these pilots provide control inputs that counter the autopilot’s inputs or inadvertently trim out the autopilot’s feedback response. This underscores that a solid understanding of the Trimmer system and autopilot control feedback is critical in understanding how to successfully employ the Ka-50 autopilot.

Similarly, pressing and holding the collective brake handle down disables autopilot feedback to the collective axis, while releasing the brake sets the altitude command to the current altitude.

Knowing how to use the Trimmer is important. Fly for a while with the Flight Director on and be able to control the helicopter with minimum control inputs. Practice standard maneuvers and try to anticipate conditions where the autopilot control response may become saturated, like when accelerating and decelerating. Then implement the autopilot and practice those same maneuvers.

After you’ve familiarized yourself with the Trimmer and autopilot feedback responses, try experimenting with the autopilot modes, the next part in this series.