By now, everyone knows that the Third Wire series has been undergoing a conversion to make the games Vista-compatible, something the original series can do with some mildly creative folder editing.

But it doesn’t look nearly as good. With the new series came a slew of improvements like graphics tuning and quite possibly the best of all, high-resolution virtual cockpits that make the previous games and the efforts of a lot of third-party modders obsolete. Best of all, they’re only twenty bucks, making the collateral damage to wallet as small as possible.

The latest, which we’re reviewing today, brings even more improvements. The release date kind of had me puzzled, though. TK is an avowed Teasip (what we Aggies call fans of the University of Texas) and he released it on Texas / OU Weekend. I fully expected him to be at the Cotton Bowl in Dallas watching the Red River Shootout (it’ll be a cold day in Hell before I call the pansy “Red River Rivalry”), not releasing a game. 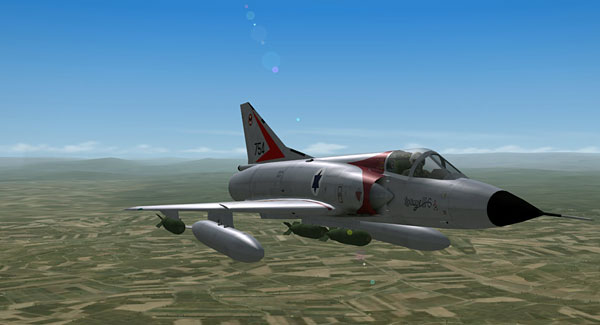 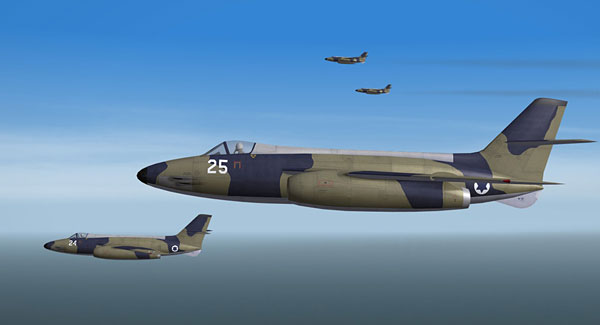 This aspect hasn’t appreciably changed since the last patch of the original series in 2008. The multiplayer, like the other second-generation titles, is still missing, but no one’s really screaming for its return. Strike Fighters, at its heart, is still primarily a single-player experience.

The AI is still far more aggressive and skillful than it was in the first release of the games, but still much less lethal than some of the more hardcore simulations. However, as TK likes to point out, these titles are about fun. Rivet counters are still going to be disappointed. 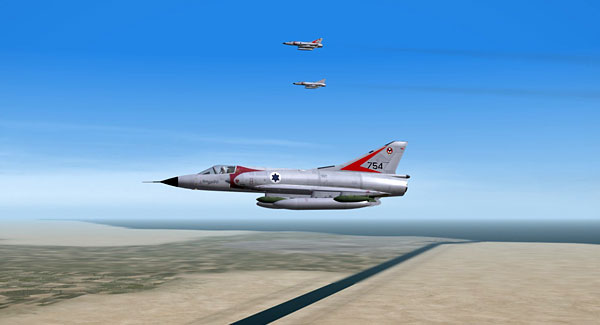 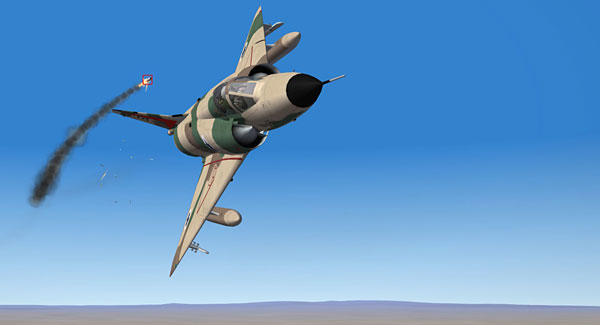 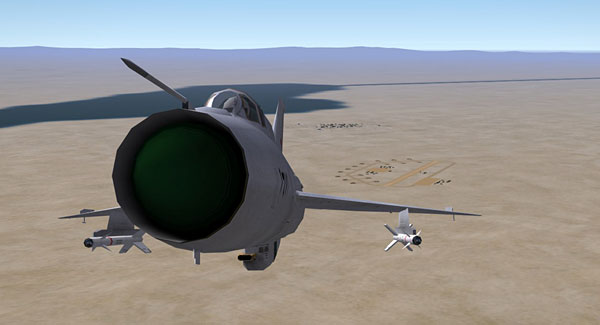 There’s still an element of Fighters Anthology feel to it in the sense that you can still dress up any plane in anyone’s livery. The newest version does bring a slew of new AI planes, both friendly and enemy, bringing the number of both AI and friendly planes somewhere in the nineties.

Surface-to-air gunners are still the greatest threat to you and the AI still cheats a little when you put the difficulty level on “Hard”. Putting it on “Normal” offers the best balance of challenge and believability. The avionics .dll files still lend themselves well to 60s and 70s-era warhorses, but don’t expect them to model 5th-generation fighters too well, for you modders who can’t live without an F-22.

I also found a new favorite. I used to enjoy the Kfir from the original series, but the latest iteration of the Shahak just blew me away. It’s a nimble little racehorse with dirt-simple avionics, making you feel like you’re really experiencing some of the first supersonic jet fighter combat the world ever saw. You don’t have to have FLIR gear and ECM to enjoy yourself.

This is where the greatest change has been made. Ever since the undertaking of converting the original series to Vista-compatibility, TK’s been threatening to fully implement DX10 into the game engine and the guy finally went and did it.

The result? On a system that used to get 18-20 frames per second on Wings Over Israel, it’s now hitting 30-35 in Strike Fighters 2 with the addition of DX10 shaders. You’d think more graphics goodness would slow it down. It didn’t. Fluid framerates with absolutely stunning high-resolution cockpits and the details maxed out to the Unlimited settings, I was in air combat heaven visually. 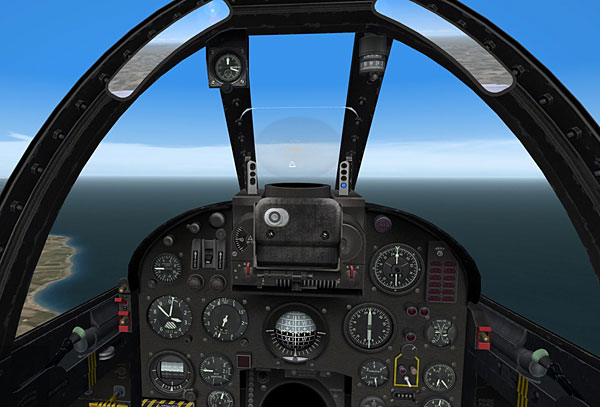 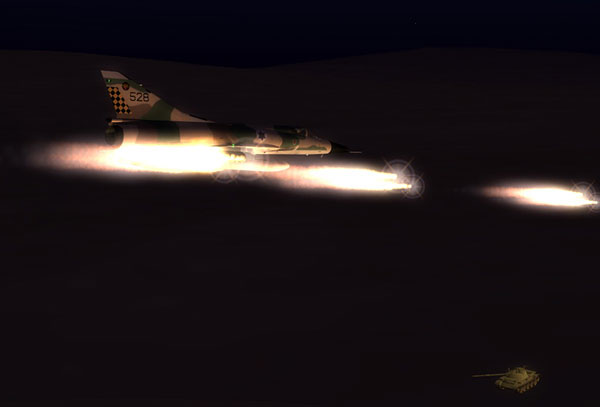 The new effects have trumped anything that’s been done before, third-party or otherwise. I was on a close air support mission with three other Neshers (the Israeli-built Mirage 5) and gave the order to attack and jumped out of my chair when I heard the hiss of the unguided rockets leaving their pods and saw the brilliant, dazzling light of their rocket motors firing off. Hitting the pickle button of my own aircraft, I watched with glee as the night sky around me glowed bright.

Also, the new shaders give the aircraft’s anti-collision and running lights very convincing look as does the glow of the afterburner effect. Essentially it’s a game-changer and makes the stock effects of the previous titles look cheap by comparison.

Sound continues to be a schizophrenic sticking point. On one hand the guns firing and the exploding percussive shock waves from bomb impacts sound pretty good. On the other, the ATC and pilot voices still sound like they’re from Broken Elbow, North Carolina. This was fine for previous titles, but a little disconcerting to hear over the radio of an Israeli Air Force airplane.

This continues to be the heart and soul of the game, offering extended replayability aspects to it. After installation, I noticed a few things. First of all, if I used any other Third Wire executable (SF2: Europe’s, for example), none of the new shaders worked and any modified campaigns I had made (like adding carriers to stock campaigns) didn’t work very well, but worked perfectly if I used the SF2: Israel executable.

I’d made a few skins and decals for a French Navy F-8 and a Texas Air National Guard F-105D and was relieved to see there was no harm done. The aircraft mods seem to be largely unaffected by the changes done by the new shaders. 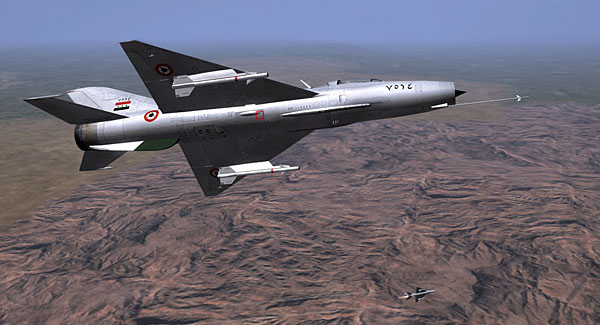 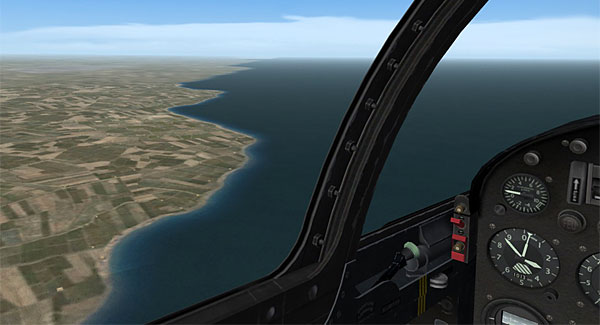 What was also nice is that it added cockpit files for a couple of Mirage aircraft that I could turn around and use on AI Mirages that were included in Strike Fighters 2: Europe, giving me about two or three flyables that I didn’t have before.

There did, however, exist a problem with third-party terrains at release. As in, they no longer worked. Modified tile sets didn’t even work in stock terrains. At the initial time of this writing, TK was looking into the situation, and if you know anything at all about the guy, it was going to be fixed shortly.

I was right. At five in the afternoon, on Monday Oct 26th, a patch was released that completely fixed the issues with the third-party terrains. Hear that sound? That’s the sound of a bunch of people cheering. You can’t even get Microsoft to patch Windows that fast.

Oh, goodness, buy it for the improved shaders alone. TK could have sent us the exact same stock aircraft and I’d still say this. The visuals are stunning and the framerate (even on modest systems) has jumped dramatically at the higher-fidelity settings.

But, counting new variants of the stock aircraft along with high-resolution cockpits and aircraft skins, and at the price he’s offering, you cannot go wrong. I easily recommend this one. 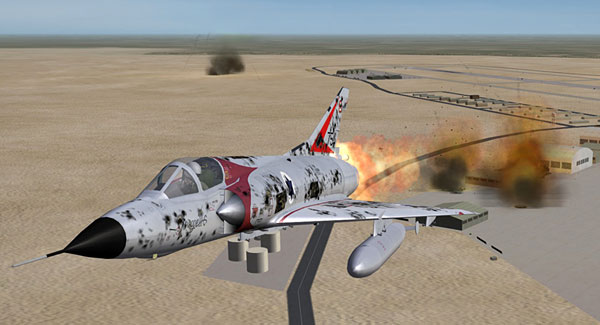