This begins a series of weekly reports that are a continuation of the original “Story Behind the Story” first published in May 2009.

Anyone who follows the Yankee Air Pirate 2 series knows that the storylines are based on real air combat events during the Vietnam conflict. But in each mission there is a “story behind the story”. We will be asking YAP2 founder John “zerocinco” Shelton his favorite missions and ask him to tell us the best “behind the scenes” stories from various YAP2 Mission Sets. Then “PFunk” or “20mm” will fly the mission and tell us about their experience.

The “History” text is excerpted from individual mission briefings located in the Members Area of the YAP2 web site, and reprinted with permission.

The story of the Wild Weasels is a chapter all by itself. This mission was flown by the man who named Weasel back-seaters “bears”. Your targets are SAM sites in the vicinity of the Ha Gia Bridge. This is an early strike with unreliable AGM-45’s. This means if you miss, you still have to hit them.

This is a hard mission. These were the hardest missions of the war. Refuel on your way in, then get back into position. Watch out for the passing strike birds, make the turn at Thud Ridge, then begin to watch for SAM sites.

Your target is the Fansong southwest of the bridge. You must take out the site and stay in the fight until all the bombers have made their runs.

We have tested this mission a hundred times. If you fly like they did, you get the SAM site (and more) and you will survive to go back again the next day.

You knew the job was dangerous when you took it.

There is a word associated with Wild Weasels that is never explained. It is the “bear”, the name they called the weapons system operator in the back seat. The man who made this name up was Milt Rickman who flew F-105F’s. He was in charge of the instructor pilots at Williams AFB when I was there. He was always on the phone trying to get a seat in an F-100 to get away from us children. On the other hand, he was probably not to eager to go back to Southeast Asia in an F-105, having completed his 100 missions north.

Milt Rickman said he was watching the guy in the back seat of another Thud working with him one day. While he was working the gear, he would be head down in concentration and whenever they launched one at them, the guy would sit up straight with his arms in the air. It reminded him of those shooting galleries at the fair… the ones where you shot the bear, it would stand up, turn around, bend back down and go the other way. In fact, he said, it was exactly like being a target in a shooting gallery. The name stuck and from then on, the guy in back was not a WSO or a GIB, he was a Bear.

I don’t know if he ever got out of the Air Training Command but we got a couple of good stories from sitting in awe at the stag bar drinking 3.2 beer and listening to the real fighter pilots tell stories that we were too dumb to find terrifying. The other one is called Red River Rats.

Thud pilots were our heroes back then. And Weasel pilots were THEIR heroes. One of the instructors there was Ed Rasimus who wrote When Thunder Rolled and Palace Cobra… from which we have drawn missions. I was always impressed that all of them were professionals and wanted to go back to the war… and none of them seemed to want to do it in a Thud. DId I mention that they were smart as well as brave? Once was usually enough. 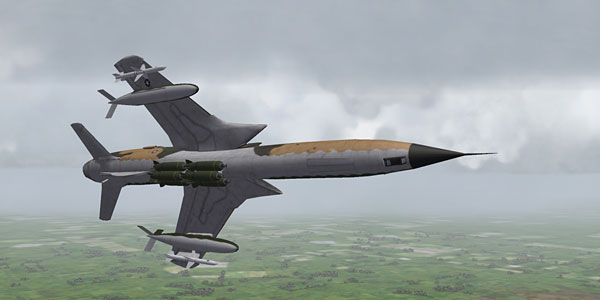 As comfortable as a Caddy…and about as nimble in traffic.

The next mission I chose was ‘Wild Weasel’, an ode to the aforemention crews with testicles the size of prop shaft bearings. First of all, the Thud is hardly the ideal aircraft you want to fly in combat. It’s large, heavy, and when loaded down with fuel and munitions, surprisingly slow. It’s turning radius is somewhere between a West Texas county and Nebraska, so it’s as spry as Walter Mondale on Quaalude.

However, it will fly for very long distances if you can keep your foot out of the carburetor and it carries a LOT of stuff. On the deck, in a straight line, it will go fast if you punch it, which when people are shooting at you, is likely the most sensible choice of action. 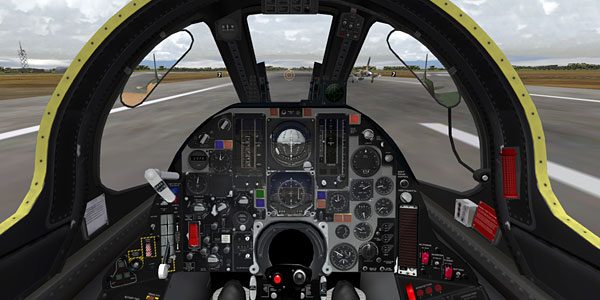 First of all, the Thud in Yankee Air Pirate 2 is a thing of beauty. We’re talking Lock On: Modern Air Combat-quality. It’s that pretty. I took off under broken cloud cover and settled in for a long transit. 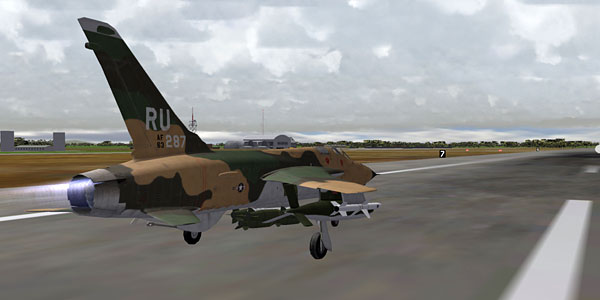 Don’t mind that lump in your throat…it’s just your colon.

The clouds are breathtaking and I could have spent an entire mission looking at them, except that when I was over enemy territory, my RWR gear was getting lit up like a pinball machine. I dove for the deck, attempting to try to get lost in ground clutter, but then I got stupid. An enemy radar was directing AAA fire at me and another SAM radar off to the side was lobbing missiles at me. I fired both of my Shrikes in desperation only to realize they weren’t my target. 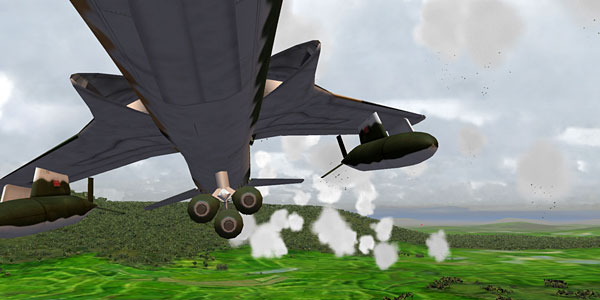 See what I mean about flooring it?

So, desperately searching for cover, I found a ridgeline to hide behind as I made my way in, finding the IP, I headed over the ridge to see a very large city in my windscreen. Arming my remaining CBUs on my centerline pylon, I finally found what I was looking for, a big, fat, SAM site with the traditional ‘Star of David’ layout. Commies are nothing if they’re not predictable. 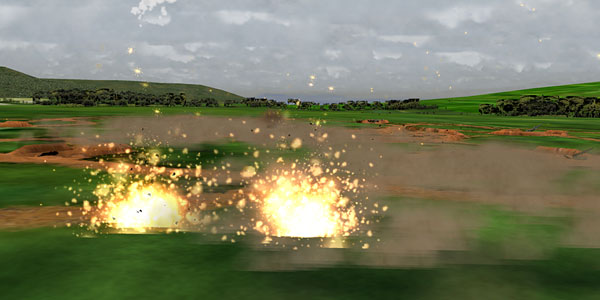 So good to know that America wasn’t the only country wasting money on military aid to other countries.

Sailing right over the site, I dropped the line of bombs and smiled with glee as it shredded the delicate equipment like tinfoil in a blender. Roaring at full afterburner, I headed back for the ridgeline before another radar could find me.