The first two Mission Set 3 missions are “Misty 11 – Tally Ho!” and “Disappearing River”. They’re featured as a “set” because both missions occur simultaneously and you get to fly them both, first as the FAC, then the heavies.

Misty was formed at Phu Csat under Bud Day (MOH). O-1E’s and O-2A’s could not survive the defenses of Route Pack One and when the Bombing Halt came into effect, the defenses from Pack Six were shifted into Laos and Pack One. To stem the flow of supplies, the idea of Fast FAC was dreamed up. They used F-100F’s because Phantoms were ominously considered ‘too expensive’ for this mission, which was certain to take hits.

They were successful in their missions and should be considered famous in the history of Air Warfare as long as anyone continues to fly. Required reading is Misty and Bury Us Upside Down.

You are a volunteer working as a Fast FAC in Route Pack 1 of NVN (aka Tally Ho) and over the Ho Chi Minh Trail. You are the first flight of the day and checking out some possible targets marked by Misty 31 the previous day.

Climb above the overcast to hit your tanker. When you’re clear of the mountains, descend below the deck and start your recce mission at the Ron Ferry. The weather may preclude the arrival of strike fighters, so you may have to take matters into your own hands. The Boss wants the pictures, the Hun, and you back in a couple of hours.

You have to fly low and fast, always changing your altitude, airspeed, and heading. In those conditions, you need to find targets. Misty used a 35mm camera. Try taking screenshots over the canopy rail!

This mission is not hard to survive. But it is hard to succeed. You have to find things with your eyes, at high speed…at low altitude…at high G’s…under fire…in bad weather, and then take their picture. It’s long and difficult, but you volunteered for it!

As mentioned earlier, these stories are a set. They came from a conversation with Dick Rutan at Mojave one day a few years ago. I was showing him Yankee Air Pirate on a laptop when it was in its formative stages. Dick Rutan, you might know, is famous for flying the Voyager, built by his brother, Burt Rutan of Scaled Composites around the world on internal fuel only in 1996. What you may not know is that Dick was a Hun pilot in South Vietnam who began to covet the danger faced by other aircrews over North Vietnam. This fighter pilot aggressiveness pushed him into joining Misty, the first High Speed Forward Air Controllers.

Dick taxied the YAP F-100F into the revetment. So we restarted and I got it into the air and handed the stick to him. He was amazed that any game would have an F-100 in it. And he was even more amazed that the minor variant he flew, the F-100F two-seater, would star in it in spite of the two well-known books about Misty FACs (Bury Us Upside Down and Misty: First Person Stories of the F-100 Fast FACs in the Vietnam War). With a start he said “Hey! There’s the Ron Ferry! You know, there was a 57 there that always shot at you when you came ashore.” Then the S-60 opened up and he laughed. He commented, “It needs red tracers… like baseballs. You could hear them roar by the canopy.” This lead to YAP creating the tracers on our AAA the next week.

I’ve told this next part before. When Dick finished fiddling with YAP, he started telling me a story of a day a long time ago. It is the exact thing that makes for a perfect story, when a man uses words to paint a picture in your head that is inside his.

He was not looking at us. Like all pilots, he was telling the story with his hands and was watching them while he went back in time forty years. Here’s what he told me:

“The gunners got to where they didn’t shoot at us so much. Not while we were on routine patrols. They had stopped risking a shot at Misty unless they had something to protect or they wanted to test their luck.

Then they would wait until you passed them and fire a burst. They did not want the Misty to see them. We’d look back to see if we could make out their location. Then we would fly away while we called for Gunfighters.”

Gunfighter was the name of the F-4’s on alert at Da Nang. All bases has alert birds but Da Nang’s were on duty for many years and were a good asset in bad places.

“When the Gunfighters checked in, we would go back to where we saw the gun. Everyone would usually lay low but when we popped up for the mark (hand bent up at the wrist as he maneuvers his Hun in front of our eyes) and rolled over (hand twisting upside down) to get the nose down, they would start shooting. They had to. Because here, right here (hand palm up, wrist bent to point the fingers down) they had to kill the Misty. They had to. Because if they missed, the Misty would put in the mark. We didn’t say ‘see my mark? Okay go 30 meters north.’ We would put the mark in the gun pit with them and say ‘Hit my mark.’ They knew that when that happened, they were as good as dead.”

“Then the sky would light up as everyone started shooting. Those guys were good and they had guts. They would stand there in the white phosphorus shooting at you coming and going all the time knowing what was coming next.”

“The Gunfighters usually carried CBU’s for gun positions. Thousands of little hand grenades…stainless steel ball bearings in pot metal…that would kill everything exposed within a very large area. Even a fast mover could hit a target with those things. When they saw the mark, the game was over for the guy on the ground.”

Then he put his hands down, thought for a moment and came back to Mojave, California again. 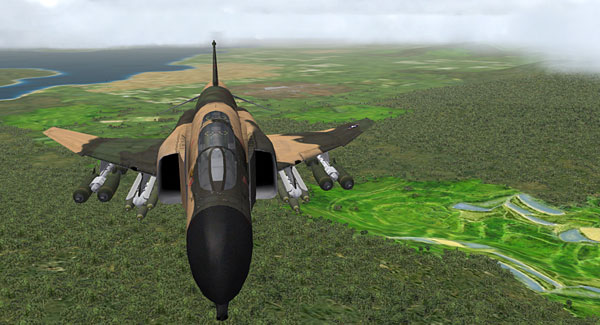 If you can’t hear Creedence in this screenshot, you have no soul.

Not long ago, a phone call bull session turned into an opportunity. The team at Yankee Air Pirate 2 have been, for the last year, steadily pumping out mission packs loaded with goodies from that venue of air warfare and we were invited to take a look and report back the ‘best of show’ missions. Two stood out in my mind as I surveyed the fifty-some-odd missions I had to pick from. 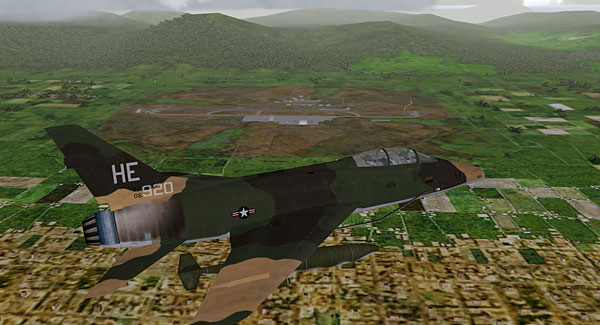 You can always tell you’re in a Communist country when the level of filth is visible from a mile in the sky.

While it’s no secret I’m traditionally a fan of naval aviation, having grown up around it, the first two, well, three mission that come to mind were all Air Force. Actually, the first one I wanted to write about is a two-part mission. First you fly the FAC mission, then you fly the mission that’s sent to blow up what you just lovingly marked for destruction. FAC is normally something I’m not interested in and the team at Yankee Air Pirate 2 managed to take something I usually find pretty boring make it absolutely riveting. One thing is for certain, the FAC role makes you feel a little like a clay pigeon since you’re getting shot at by everything from slingshots to SAMs. 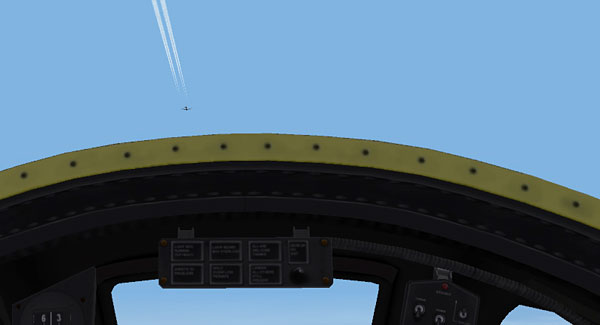 Wonder how many people get lost up here looking for a gas station?

But there’s another suicidal tendency that always brings a smile to my face, the SEAD mission. With the advent of surface-to-air missiles, there became a screaming need to find a way to prevent them from neutralizing your air power and nowhere was that more evident than over the skies of North Vietnam, perhaps the most well-defended airspace on the planet from the standpoint of surface anti-aircraft weapons. There’s something captivatingly warped about intentionally flying an aircraft into the thickest air defenses in the world to hunt down and kill people who are firing weapons specifically made to destroy the very vehicle you’re traveling in. Hence, the unofficial motto of Weasel crews, “Ya Gotta Be $#@&#-ing Me”.

The Misty FAC mission is just sheer brilliance from beginning to end. The mission starts you in a revetment (which I sincerely wish all Third Wire missions did, campaigns or otherwise) and you taxi to a takeoff. 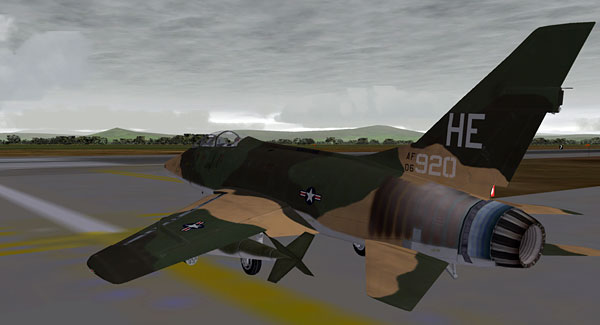 Monsoon season was something God & North American Aviation never intended you to fly in.

The cloud deck is low. Really low. Obscuring the tops of mountains low. So I put the F-100F into a steady climb, listening to the whine of the engine increase as I pour on the gas. Finally, the startling breaking of day shows up and I realize something no combat pilot really likes to think about after a long transit flight to the IP. 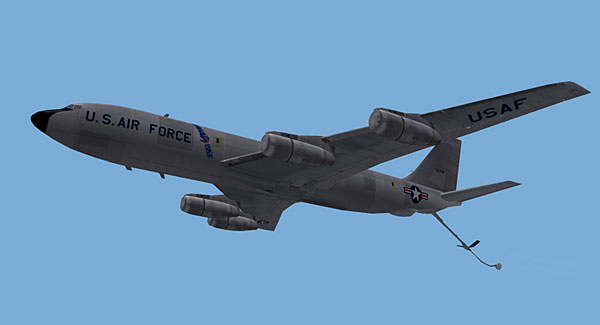 I don’t care how big this guy is… 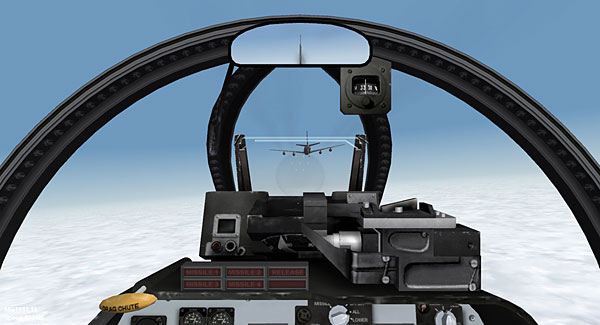 …you can still lose him.

I finally vector to the tanker and I realize just how small we both are in the greater scheme of things. Then I figure out, “Hey, he’s getting bigger in the window.” Gently, I sidle up to boom and take on fuel, finally understanding that in-flight refueling much like sex between hummingbirds. It’s done as fast as possible.

I also realize the aircraft is now much heavier with a full load of fuel and I’m now fighting to keep it level. I head back down below the cloud cover to get ready to go ‘feet dry’. Now, in the story, Dick Rutan commented that there was heavy AAA battery that would fire at you as you came ashore. Whatever. That bastard was firing at me while I was still over the water. 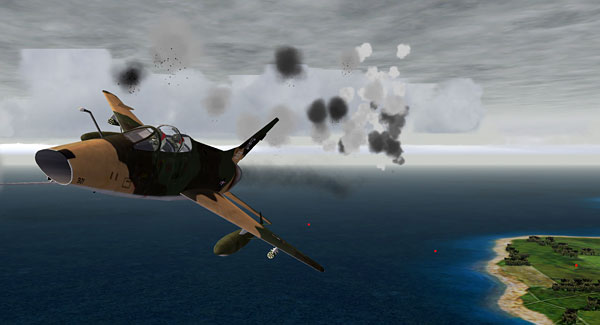 Waiting for my lily-white ass to come ashore.

Dodging gunfire, I make my way up the river and I find a procession of trucks about to cross over. Those must be the guys. I arm up the white phosphorus rockets and wait until I can see the look of panic on the face of the guy on the bulldozer and fire. Of course, a large anti-aircraft gun does the same thing, sending arcs of tracer fire right at me. 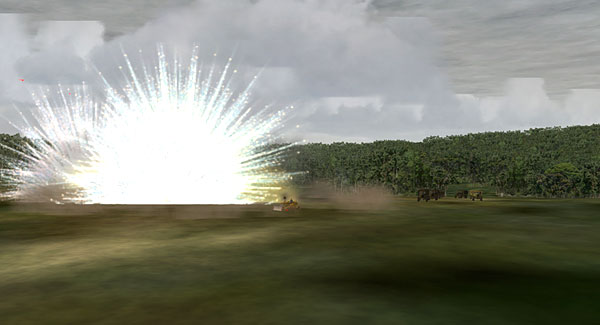 That did it. If those F-4 jockeys can’t see that, they need an eye doctor. I still have a few rockets, but now there’s more smoke than air around me, so I decide to punch the burners and leave. I hadn’t intended to hang to be flak bait, anyway. I finally make it back home and land safely, deploying my drag chute and gently rolling to a stop, checking for beer-can sized holes in my wings. Just another day at the office. 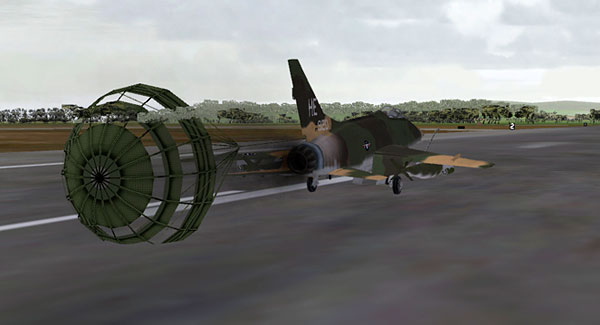 Don Prudhomme’s a wuss. At least no one shoots at you in drag racing.