This is a continuation of the original “Story Behind the Story” first published in May 2009.

Anyone who follows the Yankee Air Pirate 2 series knows that the storylines are based on real air combat events during the Vietnam conflict. But in each mission there is a “story behind the story”. We will be asking YAP2 founder John “zerocinco” Shelton his favorite missions and ask him to tell us the best “behind the scenes” stories from various YAP2 Mission Sets. Then “PFunk” or “20mm” will fly the mission and tell us about their experience.

The “History” text is excerpted from individual mission briefings located in the Members Area of the YAP2 web site, and reprinted with permission.

By 1969, there was no daytime traffic on the Ho Chi Minh Trail. The night sky over Laos was a pretty busy place. Fast-movers were inaccurate. To compensate, the number of sorties and tonnage of bombs were increased. The idea never was to stop the traffic, but to impede it.

The pilots were guided to the targets discovered by the FAC’s, sensors, and road watch teams. It was a dangerous and costly battle on both sides.

Tchepone was one of the most accurately-defended places in all of Southeast Asia. The old French barracks, bridge, and airfield were bombed at the beginning of the war. The gunners were experienced and brave. Every strike pilot knows the name Tchepone.

I met a guy named Jim Darke while racing sailplanes in the Sierras. Jim is a good sailplane pilot. He has good skills and a lot of confidence in them. But he is not the gambler that the highest ranked racers seem to be.

Soaring is a peculiar part of aviation and I won’t go into it here but it is a thing requiring great skill, knowledge of many things, time to spare and in some cases a lot of nerve because in the mountains, you can definitely and easily die.

One day at Truckee, California, we launched into strong lift just to go up and fly a couple of hundred miles and be back to land before the lift quit. After some time I remember looking waaaaay down below me some miles ahead to see a lone white 15 meter sailplane struggling at the bottom of a rocky cliff, over granite boulders with no place at all to land safely. I remember thinking how glad I was that I had all this altitude and how happy I was that I was not with that poor sumbitch down there.

Then as things happen in the mountains, I flew into a huge mass of air sinking too fast to escape. In what seemed like seconds, I was at the bottom of that same cliff trying to find a thermal to lift me out and finding nothing. Circling, I looked across the other side and there was Jim Darke, the same poor sumbitch whose luck I now shared. Jim hit a bump and I fell in with him. Gently and patiently we climbed out of that hole and got back into the blue sky in what was probably 45 minutes to an hour of hard, scary work.

We both arrived back at Truckee after a few more close calls and after putting away our gliders, gravitated to the campfire and beer while the food cooked. We talked about that flight, of course, and how close it might have been.

Like most men at play, nobody in soaring ever asks anything about your real life. Wife, kids, health, job, wealth, politics, sports…nothing. Pilots talk about flying. I knew Jim a long time before someone else told me he had been a Navy pilot. He told me he had flown A-7B’s off the Ranger. Since this is flying, it is fair game for male airport conversations and stories were exchanged. In his case, he has a few boring yarns I gave him and I have a few very good air strikes in Laos to retell. Darke Patrol and The Dog’s Head are stories from that campfire that night high up in the Sierras.

Jim was a kid flying on the wing. We tell what he remembered most. They don’t always recall what you think. Sometimes it’s the color of tracers or someone hitting the Earth in slow motion or just a big steel aircraft carrier coming at you when you are trying to land with bombs that won’t jettison. 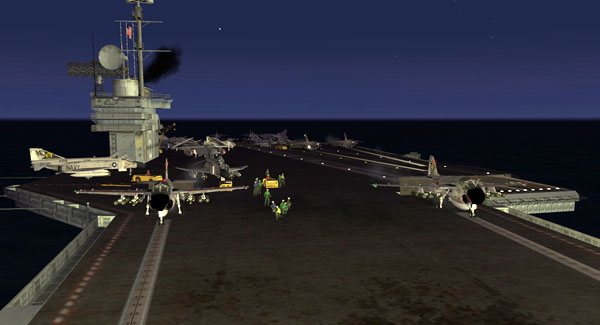 Why don’t you kids go first?

I have always been a huge fan of naval aviation as I lived around it for most of my formative years, my father being naval aircrew. So for that reason, a carrier mission was top on the list. There’s something about trying to land a hurtling piece of aircraft-grade aluminum at a postage stamp in the middle of an ocean that appeals to me. 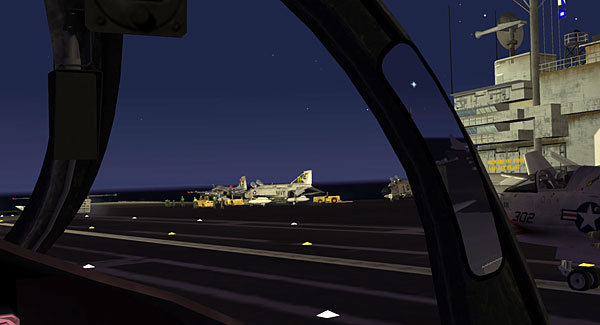 Let’s hope we don’t need him.

The naval mission I chose was “Darke Patrol”. You’re on your way to go hit Tchepone in the middle of the night, one of the most well-defended places in the war.

It never ceases to amaze me the level of detail attained by the Yankee Air Pirate 2 crew. The decks are as alive as can be made in the Third Wire universe, filled with green shirts, equipment and parked aircraft. Two Intruders were waiting on the catapults in front of me and I took off, clawing for air under my wings. 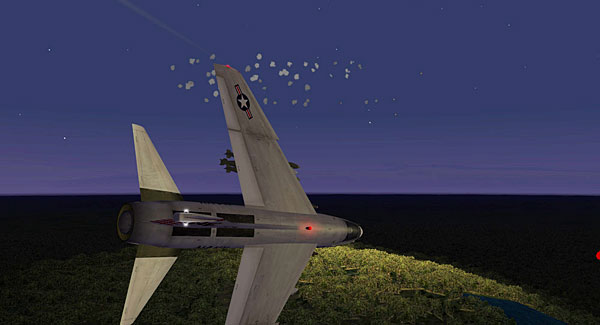 I’ll bet I owe him a beer after this is all over.

It also never ceases to amaze just how dark the team at Yankee Air Pirate 2’s idea of what night is. It’s dark. Only my radar is telling me where the coastline is because I can’t freakin’ see it. On the way in, I notice I’m very close to the DMZ and there are friendly and enemy airbases within about ten miles of each other, and I’m flying between them.

I notice as I reach the IP, the skies are already lighting up. The two aforementioned Intruders have been found by the enemy AAA crews and they are busy trying to swat them from the sky. As I get about five miles from the target, I realize no one’s shot at me yet. Do they see me? Do they know I’m… 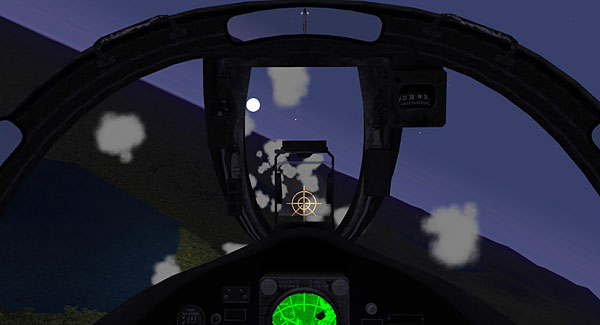 ….HOLY HELL! THEY KNOW I’M HERE. The crashing din of the AAA is a testament to the sound editing done. As I find the column by the light of an AAA gun firing tracers, I arm up my Mk.82s and point the nose down at them, releasing at about 2,500 feet and pulling frantically up, hearing the satisfying crunch of half-ton explosives tear an enemy motor pool full of parked trucks apart. Not even an Earl Scheib paint job’ll fix that. 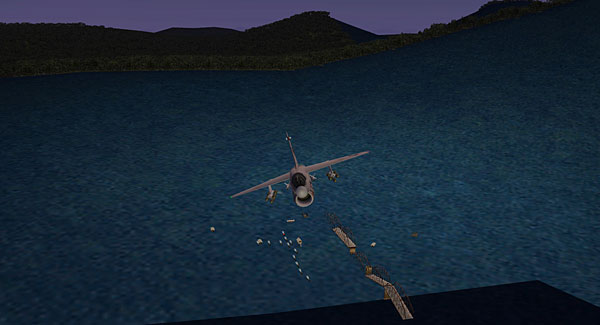 Okay, let’s go to the tape… yeah, this is where they got me.

On the way out, I notice a problem. My controls are sluggish. I check for damage and don’t see any, but the aircraft is not able to maintain speed and the coastline is still about ten miles away. I limp my way along until my aircraft finally gives out about five miles into the ocean and I’m forced to eject. Better that than over the area I just bombed.