Does Windows 7 Force a Goodbye to an Old Friend? 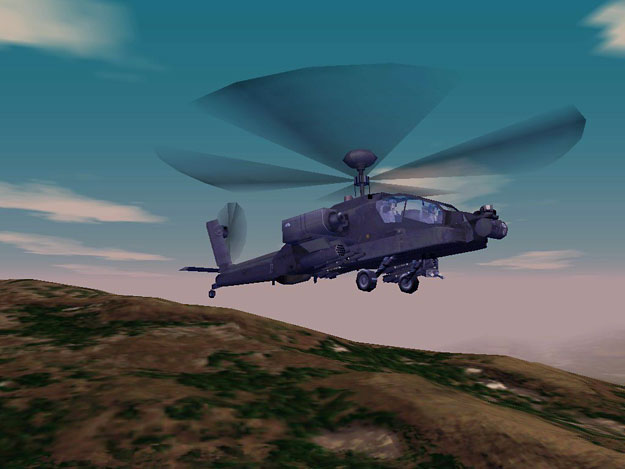 640 x 480 native resolution and a long-gone 3DFX video technology in arguably the best air combat sim ever made. That was Jane’s Longbow 2. As our favorite sims grow older and older, and the gap between our sims and modern technology grows wider and wider, we are faced with a increasing dilemma. “Flyboy” presents what many of us have faced — benefit from the current technology, yet try and keep 10 year old simulations functional. Have we finally seen the point-of-no-return where a separate legacy computer dedicated to older titles is the only viable answer to play classic sims?

Many of you will know me from the Jane’s Longbow Series Forum here and I have been an active member of this community now since I first joined. Now that Kevin “PositiveG” Speichts has sadly passed on, I guess I am now one of a very select few who actually still cares enough about Jane’s Longbow 2 to try and keep it up and running on the very latest technology. It is not without its problems though.

The latest operating systems and processors have been the main bane of Longbow 2 fans lives regarding keeping one of our favorite attack helicopter sims running.

So, here I am to talk a bit about the problems that may arise and possible solutions on how to fix them. Please be warned though, that literally every computer on the planet is different and what may work for one — may not work for another — even if the system specs at first appear to be identical.

Problems that have arisen when trying to play Longbow 2 on a Windows Vista or Windows 7 multi-core processor system:

I have tested LB2 with one core turned off (as I have a dual-core processor), but the same problems are present. The only difference is I think that the game freeze happens somewhat less often and not so quick into a mission — but that’s about it!

I have also tried running the sim through programs where you can turn processor cores off, and I have used Microsoft’s Application Compatibility Toolkit fix (see below) — but still no good. 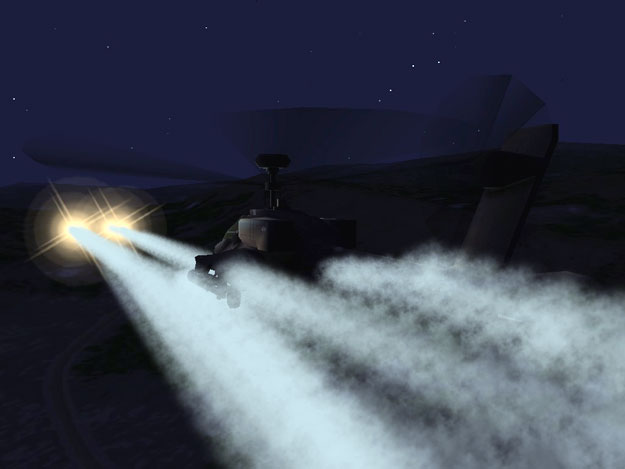 It is now commonly known that most, if not all, people simply can not even get LB2 to install on Windows Vista or Windows 7. You can actually get as far as copying the files, but when it comes to the part where the terrain map first decompresses — that’s when you get an error and you have to prematurely finish installation. LB2 will not run in this state and you will be slamming the keyboard in confusion and frustration.

So far, none of us in this forum have figured a fix or bypass for this. The only way to successfully install LB2 on Windows Vista or Windows 7 is to install it on a Windows 95 / 98 / XP system, then copy the entire install folder over to the Windows Vista or Windows 7 system. Luckily LB2 has minimal registry entries so simply copying the folder over this way avoids further problems.

You can no longer apply the patch or Display Driver Update (DDU) patch on Windows Vista or Windows 7. These files come in 16-bit installers, so in Windows XP (64-bit) and both 32- and 64-bit versions of Windows Vista and Windows 7 they simply won’t run. Therefore if you have a 64-bit operating system you definitely have no chance. You wouldn’t think it would make a difference as most 16-bit files worked in 32-bit OS’s, so why is it any different for 64-bit? Because the architecture in Windows Vista and Windows 7 64-bit doesn’t support 16-bit. Note that if you run Windows XP 32-bit you should be fine. That does still support 16-bit. Our sim lives just got a whole lot more difficult.

Getting it to Run

Some people have had luck with using the various compatibility mode fixes on Windows XP. Windows Vista and Windows 7 have a whole bunch of additional compatibility modes to try out — but whether or not any prove to actually be of any use to us remains a question.

Setting the LB2.EXE to run in Windows XP compatibility mode is what I currently use, and is what other players have reported as being workable. You would have thought “Windows 95” emulation mode would be the best, but there has been problems with that.

To run in Windows XP compatibility mode, create a shortcut to your LB2.EXE file, right-click on it, then select “Properties” from the menu. Click on the “Compatibility” tab, click the check box for “Run this program in compatibility mode for:”, then select “Windows XP” from the drop-down menu and click “Apply”, then “OK”. Note that it doesn’t appear to make a difference if you use the “Run this program as an administrator” option. 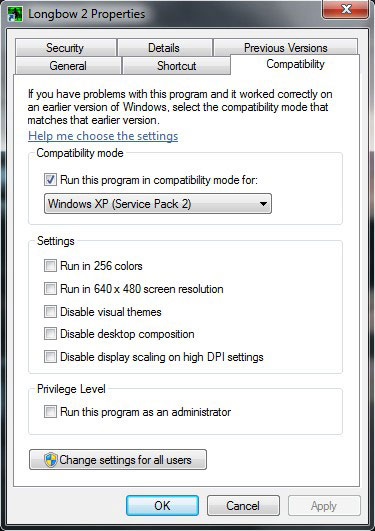