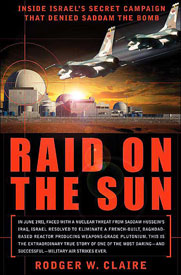 The Israeli Air Force (IAF) is legendary in the combat aviation community for their skill and defiance. Having fought multiple wars, and being engaged nearly continuously in conflict since the founding of the state of Israel, the IAF have honed their skills equally through training and actual engagements. The complex politics of the Middle East and the appropriateness of varying levels of the application of force isn’t the thrust of this article, but rather a look at one of the most bold and audacious missions ever flown by any air force in the history of air warfare.

The book we’ll be looking at today is “Raid on the Sun” by Rodger W. Claire which is the first in-depth look at the historic 1981 raid on the Al Tuwaitha nuclear facility in Iraq. Published in 2004 the author was granted unparalleled access to the pilots that flew the missions, the planners, and the archives that have until now been shrouded in secrecy. And thanks to some creative work from dedicated Falcon 4 fans, we can duplicate the strike and attempt it ourselves using an add-on theater and a custom mission.

The short history of the strike on Osirak (Al Tuwaitha) is that Saddam Hussein had desperately been seeking nuclear weapons since the 1960s and they finally found a willing partner with France. To this day there continue to be arguments that the Osirak reactor was not and would not be capable of producing weaponized uranium. Indeed, the Israeli government was radically split on the decision to authorize the strike with many high ranking politicians and diplomats convinced that the strike would ultimately result in worldwide condemnation of Israel. The back story and lead-up to the actual strike actually makes up the first two-thirds of the book and is a fascinating recap of the history of Israel and the coming to power of Saddam Hussein. The cloak and dagger espionage, sabotage, and assassinations that occurred (likely by Mossad) in an attempt to prevent Iraq from progressing with their nuclear program were astounding.

Eventually, however, the inevitable could be delayed no longer and in 1981 Iraq was poised on the brink of becoming nuclear capable with the construction of the French research reactor at Al Tuwaitha on the outskirts of Baghdad.

“In May 1977, it was clear Hussein had much bigger plans than a simple research reactor. Israeli intelligence estimated Osirak would go “hot”, that is, be fueled with radioactive uranium, within three years, four tops. Israeli scientists figured the reactor would produce enough enriched weapons-grade uranium to build two or three Hiroshima-size bombs a year. The contingency people calculated that one “small” atomic bomb dropped on Tel Aviv would kill at least one hundred thousand people.” – page 41

Israel considered a few options on how to destroy the nuclear facility, including the insertion of a covert operations team to destroy the facility, but eventually the least risky option was to deliver the blow with an air to ground strike. The planning of the strike evolved over a period of years and eventually it was tasked to a group of eight airman who would be flying the IAFs newest fighter/attack aircraft: the General Dynamics F-16A.

The choice of the F-16A was not without problems however. There was much internal lobbying within the IAF to perform the strike with their resident F-15s, but the planners were convinced the accuracy of the F-16 was necessary to perform the precision bombing that hitting a nuclear reactor required. The F-16As that the IAF received, ironically, had originally been ordered to U.S. Navy specifications and had been destined for Iran. The 1979 revolution in Iran, however, nixed that sale so the IAF became the benefactor for the cancelled delivery.

“The shah had ordered his planes built to United States Navy specifications. As such, the planes were designed to carry the navy’s standard 1,000-pound ordnance. The IAF on the other hand used only 500-pound or 2,000-pound bombs.” – page 87

In addition to weapons modifications, the IAF also had a significant political challenge in that they had to convince the U.S. government to sell them external fuel tanks for the new fighters. Without the external tanks, there was no way the F-16 would be capable of making the round-trip flight to and from Baghdad and air-to-air refueling enroute was out of the question since the entirety of the flight path would be over hostile territories. The provision to sell Israel the F-16s without external fuel tanks was a political one since it could be argued that without the fuel tanks the fighter would be construed as a defensive weapon rather than an offensive one. In the end however, with enough pressure from Israel the U.S. approved the sale of a limited number of fuel tanks to Israel and the mission planners got to work planning the strike.

“Operations quickly discarded the idea of using so-called “smart bombs”. These were mostly U.S.-made GBU-15s, which were dropped at a distance from the target and guided by the pilot through remote-control moveable fins and a television camera in the bomb nose. But the bombs were large and cumbersome, and the added weight and drag would reduce fuel efficiency, already a crucial factor in the long-range mission. The success of the mission, Ivry was convinced, rested on simplicity and the element of surprise.” – page 101

The fuel problem would remain a critical question throughout the planning and execution of the attack. The IAF pilots spent years testing different configurations, attack profiles, and flying techniques. Ultimately it was decided the pilots would fly a low-altitude ingress to avoid enemy radar coverage, perform a pop-up bombing, an initial low-altitude egress until clear of the target area, followed by a high-altitude straight line return to Israel over Saudi and Jordanian airspace. There was no room for additional maneuvering over the target area, nor enough fuel to engage in any air-to-air altercations. F-15A aircraft would accompany the strikers to provide a combat air patrol.

“Altogether, fifty aircraft, CH-53 helicopters, and hundreds of troops were mustering for the attack, although only the mission pilots and high command knew what the target was. The CH-53s carrying combat search-and-rescue crews would take off an hour before the F-16s and then hover over the eastern borders of Israel for the remainder of the mission. Eight F-15s would fly support: two two-man F-15s to follow behind the F-16s and circle high above Saudi Arabia while serving as communications relay stations, and six F-15 fighters from Squadron 133 – two to provide radar jamming above the target area, and four flying at high altitude and distance to provide air-to-air combat support if needed.” – page 143

The final third of the book details the execution of the raid and is a very compelling read. The access to the pilots and the recollections of their thoughts and emotions during the stressful flight to the target is a great read. One of my favorite parts of the story is the fact that just a short time after takeoff for the historic mission the entire outcome of the mission could have been changed because of an extremely unlucky encounter. Just after takeoff the strike route took the aircraft south over the Gulf of Aqaba across the 8-mile wide stretch of water. Flying at low level, the jets screamed across the water just minutes into their mission.

“As Raz skimmed across the gulf water, close enough to the choppy surface to almost smell the salt spray, he spotted a stunning white yacht at anchor below. Glancing at the fine lines of the ship, he wondered who could own such an incredible vessel, probably Arab royalty or some rich industrialist he thought vaguely, and then, within a second, he blew by the yacht and was across the gulf.”

“On the deck of the yacht, Jordan’s King Hussein, alerted by the distant but unmistakable roar of jet fighters, held a hand to his brow to shade his eyes and peer west toward the Sinai. Several dignitaries and the ship’s military officers joined the King on deck, their eyes also straining to the west. To his amazement, Hussein saw what appeared to be four Israeli F-16s streaking toward his ship. As the planes screamed by just overhead, the king could clearly make out the desert-tan camouflage paint on the fuselages and, more alarmingly, two huge bombs hanging from beneath the wings of each aircraft. Immediately Hussein grabbed the ship-to-shore telephone and was patched through to Jordanian defense command back in Amman.” – page 173-174

Jordan’s King Hussein reported the Israeli planes heading east but nothing was ever relayed beyond the initial report. Had the report been forwarded to the Iraqi military the entire mission might have had a far different outcome.