An Interview with Jason Williams and Albert “Loft” Zhiltzov

With Rise of Flight celebrating it’s First Anniversary recently and watching it’s evolving and continued development, we wanted to find out what else was in store for the title. With talk of new planes (including those multi-seat bombers!) and the new Career Mode, SimHQ asked Jason Williams, President of 777 Studios, and Albert “Loft” Zhiltzov, Producer of Rise of Flight to give us the latest news. Now we have visual proof and additional information about what is coming. Read on to learn many new things about this WWI air combat sim. 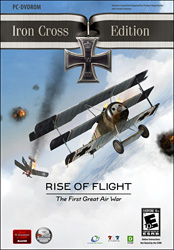 guod: One year after its initial release, what is the current state of Rise of Flight?

Jason: From a product perspective, we have just released the Iron Cross Edition in North America and it is doing well so far. It’s available at major PC game retailers including GameStop, Amazon, GoGamer, Newegg, FSPilotShop, PC Aviator, Fry’s Electronics, Micro Center, and just recently Best Buy has agreed to pick it up in 500 stores. It is also going to be released in Europe in August through our partner Aerosoft and we will also release it digitally through our web site and our digital partners such as Direct2Drive.

I am very proud of the work that has been done to ROF by the team to really improve its prospects for long-term success. The overall product has much more content, many more features, and is much more stable than the original release. But as always, there is some more work to be done.

For instance the long awaited Fokker Eindecker is coming in August to give the early war fans more to cheer about.

Albert: This was a complex and interesting year. We have not only stabilized the game, but also added new technologies such as HDR lighting. The picture has to look better, while the load on the system has become more even, it is possible to even improve performance on some systems. That is not all that we have prepared for you in the project. Because of resource-technology virtual flight, we should carefully test each new element.

A separate important aspect was to support multiple cores. At the time of our entering the market it was a very modern technology and had not yet been an accumulated experience in the application of computer games. In this work, we have been helped by Intel specialists, for which we are very grateful. Now I am very happy that users are buying more modern multi-core processors confidently and talk about performance at high settings. The emergence of 64-bit systems has made the need to increase the memory used by the game. In the future we plan to give 64-bit systems more attention knowing that this will give us more resources to create more beautiful and realistic graphics.

The speed of technological development in the genre of flight simulators is directly dependent on the growth opportunities for your PC. But the current recommended system requirements have the potential to improve the graphics and engineering component of the project. Some technologies, you will see very soon, and some will be delayed as long as not all PC are prepared to withstand this load.

For example, we have created a new damage model that takes into account in the simulation, ropes and streamers as well as additional elements of design. If part of the wing loses its strength, for example, from a direct hit bullet on the ropes, pulling the same rope over a different part of the wing and will react on the entire plane. But an increasing flow of incoming air, removes it, the rest of the wing is damaged and has even less strength. This creates a very interesting situation and very realistic effects of structural damage. It is for these more realistic engineering models that we need more processing power. For this year we did a lot, but even more will come.

guod: Speaking of multi-core, has the issue with specific dual-core processors improved any recently, especially with Windows 7?

Jason: I defer to Loft, but many of our customers run ROF just fine on their dual-core processor computers and a vocal minority does not. It’s very frustrating for us to hear of users with poor performance.

Albert: Yes, it was news. Windows 7 has its own mechanisms for working with data streams for multi-core processors. At the same time the operating system and some applications reserved power of multiple threads. Since ROF is also a multi-threaded application, there is a conflict in which the operating system does not produce the necessary power to annex settlements. The result is a slowdown, jumps and other “fun killers”. In this case, we are confident that ROF had no effect on the ability of the operating system, even if it got more computing power. I do still think it’s just a defect, an unfortunate simplification of this system from Microsoft engineers. We have written several letters with suggestions and a description of the problem. Our findings are supported by the specialists at Intel, they fully agree with us. But Microsoft is silent. So all we can say is — use quad- or hex-core processors with Windows 7 or Windows Vista operating systems. ROF will make use of their free data-flow and get good performance with high image quality. If your budget doesn’t permit new hardware, use Windows XP with dual-core processors. Windows XP does not interfere in the management of data flows. As you can see, a good knowledge of mathematics does not help us solve the problem. But we are looking for additional opportunities. And we do understand that players want to play but don’t have the opportunity to buy a new processor.