guod: Are there any other items that you have worked on that you can now mention for the first time?

Jason: Yes, our engine is always evolving and things like a new water texture and more bug fixes are on the way.

Albert: Already in version 14 for owners of powerful computers, we have added higher-quality display of water in rivers and lakes. It is more realistically lighted and makes landscape more dynamic. But we leave the opportunity to use the current settings and display the water surface, if your computer’s performance is not enough. Fix the situation with a new line of accelerators from NVIDIA 4xx, for owners of top hardware it is important. We have long wanted to work with the night scenery. We would like to make it dawn or sunset, more than atmospheric. To do this, we want to have items that can glow with light all around on objects and surfaces. In automobiles, may be able lights illuminating the path, floodlights or just for lighting fire sites, and of course the night bombing. This will make the night a very colorful time of the day.

We also begin to make some changes to the interface to prepare a new game mode “Career”. Thus, in the short version, you get a graphical cascading menu, which make it easier to manage your wingman or cause various widgets (map or appliances for example). Menu graphics will show you the choices. You do not even have to memorize the key which causes the widget or gives orders to your wingman to attack the nearest target. The icons will prompt you even if you do not remember the combination. This will help to quickly master the interface.

Also, we are empowering the chat, you can now call the chat from any part of the menu from any screen. So now, you can communicate not only within a single game server, but with all ROF players that are online. I think this will be easier to find friends, and teams quickly, and prepare for joint flights. These are some of the new elements for the next version, and it is certainly not all.

guod: What about issues that people keep complaining about like the Lewis Gun reload issue, or the Aldis gunsight, or the ability to swivel the gun in the DH.2 and SE.5a? One more — can we get Hyperfighter support for ROF?

Jason: Well, some of these issues had technical problems that prevented us from implementing them. But I will let Loft elaborate further.

Albert: Of course, all these elements would have done ROF even more profound. All this can be done. But as you understand our capabilities are limited, so important priority. We note with pleasure and great interest to do all this if possible.

guod: Will we get a place to exchange missions, campaigns, and skins?

Jason: That would be nice, but it takes money and time and both are finite at the moment. If we are going to offer an assets site we want to do it right and make sure management of it is easy and content providers can easily upload and download such content. Something like the old IL2Skins.com site would be great, but that’s a huge job.

Albert: I would be very happy to use such a resource. I’ll wait until he appears. 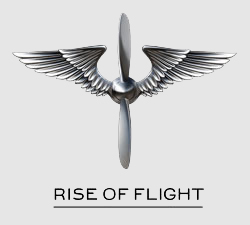 Jason: It’s pre-mature to talk about what’s next, but we will say that the ROF Engine (Digital Nature Engine) is being groomed for bigger and better things. What that means will be announced sometime in the future. We want to be the best sim developer in the world, even if it kills us. BUT what we need is support from the community at large, no matter who your favorite developer is or what you like or don’t like about our product, ALL flight sims (assuming the product works halfway okay) deserves your support. The number of serious sim developers can be counted on one hand.

The big publishers don’t give a rip about flight sims and the big retailers really don’t care either. This community is small enough to where we need to support each other. Combat flight sims are the most difficult kind of PC title to make, but it enjoys the smallest market share, the math doesn’t add up does it? Be kind to your fellow simmer and sim maker, the sim you save may just be your favorite.

Albert: Yes, we are thinking of what will be the next step. We have done evolutionary development with our Digital Nature Engine. This laid the basis for the project architecture. Our programmers are already making plans to use DX11 to create graphics and the possibility of 64-bit systems using large amounts of memory. This course will give us the opportunity to make the next technological step, and even more surprising graphics and depth of physical modeling. As for the specific project I have already have some choice of topics and genres that could be made on the basis of Digital Nature.

It would be interesting to create a project of another era, the Battle of the Pacific Ocean, huge aircraft carriers, hundreds of people performing their work on the deck to ensure your take-off or landing, night operations P-61, flying boats patrolling coastal territories and rescuing crews from wrecked planes, and perhaps give you opportunity to manage other military equipment? Tanks, guns and ships. So that would be on the ground as in the air. An unfolded victorious battle. Imagine a battle of Kursk, where you can be the role of the tank driver, keep fighting for every village, or in the role of assault tanks helping the Allies to break through. Maybe the fighter that does not let attack planes and bombers smash your ground troops? On the other hand, many have asked for us not to forget about the world of civil aviation. There is a letter which we are asked to create a realistic map of European countries or the United States and to make exact copies of such aircraft as the Cessna and Piper Archer. And add to them the famous aerobatic sports planes, such as Yak52 or Extra 300.

We have a lot of interests and of course we would like to develop and find new and talented people to create new projects in different genres and on different platforms. But now we are focused on currently developing ROF. Once we decide on the next step, we will tell you. I believe that ROF is only the beginning. And I’ll be glad to act as a producer in the next project, now with 777 Studios.