An Interview with VRS’ Jon “Varmint” Blum
by David Tessier

Well know as one of the must-have premier add-on modern combat flight sims for FS2004 and FSX, the Vertical Reality Simulations F/A-18E Superbug has been a favorite since it was first made available. Then in mid-January, VRS announced the first add-on, TacPack forFSX. Due in springtime 2011, the announcement caused a lot excitement with the thought of (finally!) providing FSX pilots the ability to fire-off weaponry. Let’s face it, as good as FSX planes are, you’re left with static air combat functions. Until now. Take a look at the VRS promotional video below.

David: First of all, thanks Jon for taking the time to answer some burning questions about the future release of the VRS TacPack forFSX. Okay, first question. With this new technology, do you think there will be a rush by other developers to develop more modern combat aircraft with weapons capability for FSX?

Jon: I don’t know that I’d call it “technology” as much as thinking outside the box combined with a lot of time and brain-sweat. Technology is IBM’s “Watson” smoking Ken Jennings at Jeopardy. Although I’d admit I’ve abused the word as much as any other developer out there, I think people need to be aware of the difference. We’re doing cool things, yes, but we’re not curing cancer. All we’re doing is making Flight Simulator do something it was never designed to do, and doing it without the source code.

But getting back to your question, there’s definitely been a certain resistance on the part of mainstream developers to approach modern military aircraft. This has probably been due to a number of things, not the least of which is financial; It’s really no shocking revelation that the largest market for FS add-ons is commercial and civilian aircraft. A developer that decides to go military is taking a risk, and generally can’t afford to spend the same amount of time on systems that they wouldn’t think twice about devoting to an airliner. This is why basically every modern military aircraft to date has been at best a shallow representation of the real-world counterpart; Nice model, nice textures, no substance. A number of FS developers have been doing fantastic WWII-era aircraft, but clearly these don’t present the same challenges one finds in modern combat aircraft.

The second part of the problem is perception. There are many folks (both developers and users) out there that just aren’t going to be convinced that FSX is a viable platform for this type of aircraft. Pre-TacPack: “What’s the point if you can’t shoot anything.” Post-TacPack: “If I want to shoot stuff I’ll get a stand-alone sim.” It wouldn’t matter what we did, FS will always be perceived as a second-class citizen for combat aircraft. While it’s true that the infrastructure has yet to be built to support the campaign aspects of a stand-alone combat simulator, it’s far from impossible, and we’ll get there because the technical problems have already been overcome. This isn’t about patching something up to become a poor-man’s recycled, second-class combat simulation, this is about taking the only simulation available with real-world navigation and enabling a high-quality systems and combat experience.

Finally, there’s ego. To be honest, I seriously doubt developers like Aerosoft are going to adopt the TacPack. It seems to me that any time the opportunity has arisen for them to do something out of the box, there’s some alleged philosophical reason why it’s not for them or not possible. We prefer to think of those opportunities as challenges. In general, I think It’ll be a very hard sell to convince developers to jump onboard. There will be those that use another system, there will be those that try to develop their own, and there will be those that simply don’t care. We expect a very-small adaptation rate by third-parties for all of these reasons and more. This is a shame because the more people that decide they won’t develop with the TacPack, the less pervasive the multiplayer experience will be, the less control we’ll have over standards and anti-cheating, and the more confusion there’s going to be in the marketplace.

More to the point, the answer is no, I don’t see any of this changing the add-on industry in any major way, at least not in the short term. “If you build it they will come” doesn’t always apply. It’s going to be hard to overcome the financial, perception, ego, and divergence issues on the part of developers, and it’s going to be hard to convince end-users that military aircraft can not suck. 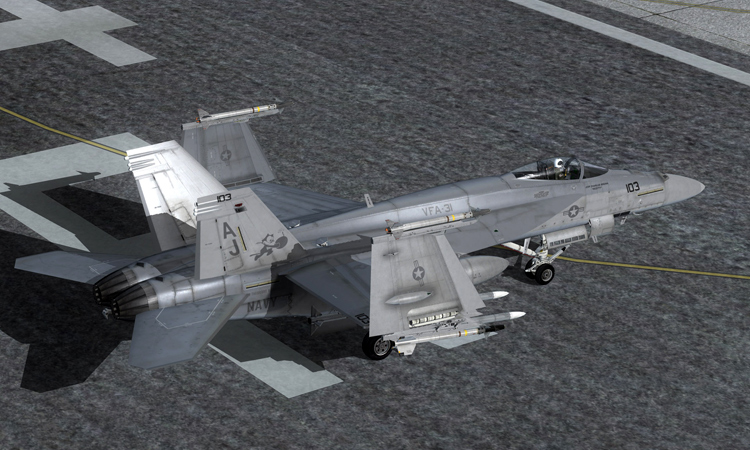 David: With the TacPack, will the FSX flight sim community become divided between civilian vs military flights?

Jon: I don’t think so, at least not any more than it is already. I’m personally in the middle-camp and like to fly both. If it’s complex, functional, and pretty, I want it. In terms of multiplayer, the TacPack will have no influence on those who don’t actually own it. A non-TacPack user will not be exposed in any way.

David: Will the chaff/flare capabilities that are included with the VRS F/A-18E Superbug be able to defeat missile lock?

Jon: Oh yes. Chaff and flare are actually objects with their own signatures. Timing the deployment combined with maneuvers such as notching will definitely be considered. Believe it or not, ECM is a really difficult challenge to get right. I’m sure we’ll probably go through more than a few iterations before the balance is right, but as with anything else, if you can understand how the real system works with enough confidence, you can usually simulate something surprisingly well. 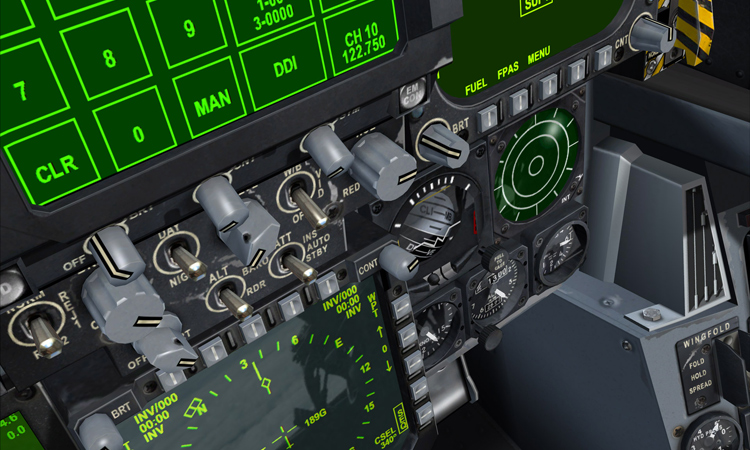 David: Referring to the list of available weapons, will they be able to be tweaked/modded to “downgrade” them? For example, the efficiency of the AIM-9 during the Vietnam era?

Jon: That’s a great question. First and foremost, we need to kick out the Superbug-integrated version. We’re actually going out of our way to make sure weapons CAN’T be modified for any aircraft that’s “certified”. This allows us to control and to a certain extent, to monitor, the quality of multiplayer sessions. We don’t want people able to create super-weapons, crash a multiplayer session and basically hose everyone. Since we don’t have control over the multiplayer interface itself, we have to work within the confines of each aircraft in order to quell cheating. When the host creates a session, they’ll be able to enable a certification enforcement, so that anyone joining the session will need to be using a certified aircraft or be kicked. This applies to both weapons and flight models.

Developers will be able to modify the parameters of their weapons, but this isn’t something we want end-users doing, at least not for certified aircraft. If there’s a problem with balance, it needs to be addressed by the developers. That being said, user input and community involvement is critical in making the right decisions. We (VRS) don’t want to dictate what a developer does, but we DO need to help them make the right choices. It wouldn’t be very much fun if we had guys flying around with nuclear AAMs strapped to the spaceship-like flight dynamics of the Acceleration Hornet.

The Best of Simulations – 2010
VRS TacPack for FSX Page 2
McCauley Vintage Propeller Not Sure if Cut Or Crashed Decor Restore
$99.0