David: Not much is known about the new Microsoft Flight sim/game. Are you planning on upgrading the F/A-18E Superbug and weapons pack to fit it after the release?

Jon: Believe it or not, you probably know as much about Flight as we do. Microsoft hasn’t seen fit to let us in on anything. A couple of the large developers with clout seem to be under NDA, but VRS is under “DKS” (Don’t Know S**t). There’s really a lot of variables with Flight that we just can’t anticipate. For example is it a “Lite” version of FSX? That’s certainly one of the rumors. If Flight offers better performance than FSX (e.g. they actually use some GPU and multi-threading), AND it doesn’t kill something important like SimConnect, then it could take over much faster than FSX did from FS9. If it looks like that’s happening, we’ll probably move in that direction pretty fast. It all depends on what the SDK looks like and how much work it’s going to be. We certainly won’t develop a new aircraft from scratch for FSX if Flight is a viable alternative with a high adoption rate.

David: Would there be any chance of this evolving into a true combat flight sim with a dynamic campaign?

Jon: Yes. All the basic tools are there now, it just comes down to time and resources. One of our goals for the TacPack is a mission builder. It’s doubtful a full-blown builder will be part of the base package (although we will have some basic tools for dropping assets into a session), simply because it’ll take the better part of a year to develop that system. But from there it’s just one more step to a campaign system. We know at least one other developer working on a naval simulation right now with plans to adopt the TacPack SDK. We’d very much like to see if we can’t coalesce several simulations like that into a multi-role paradigm. A campaign system is on the table, it’s feasible, and it’s something we’re going to consider. 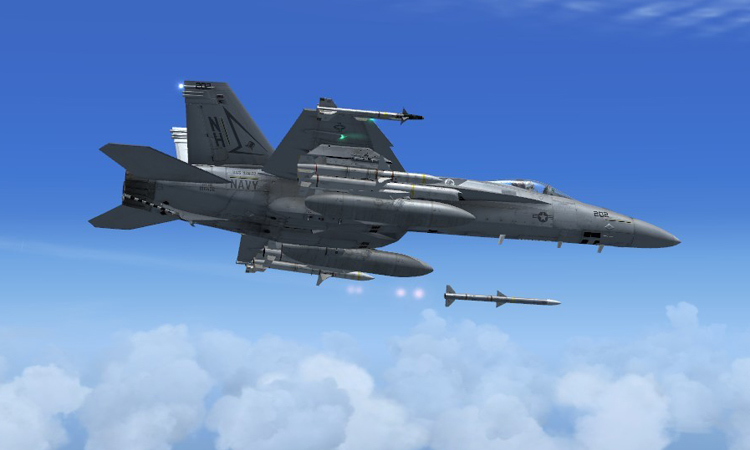 David: What is the source of your research since most of the actual plane’s details aren’t public?

Jon: Actually, there’s probably not much about the plane that isn’t public. Certainly every non-combat system and the majority of performance characteristics (including weapon-specific drag indexes), are publicly available in NATOPS as well as numerous other references. What isn’t available is ANYTHING on the APG-79 AESA radar, which is why we simulated the APG-73. The ’73 is still in widespread use throughout the fleet, and I believe it offers more of a hands-on experience than the ’79 would anyway. Many other tactical systems share a fairly common interface (at least intra-branch) and that data can be found in flight manuals for either the legacy Hornets or even entirely different aircraft fitted with the same systems.

We’ve also had opportunities to get some real simulator time, and although we still couldn’t access restricted systems, we were able to completely nail everything else. If it tells you anything about the quality of our Superbug for example, my partner nailed a 3-wire on the first trap in the real sim. I managed to get on the deck the first time as well, but I think I may have mortally wounded the LSO, because I swear I saw him giving me the finger after I boltered.

There’s always going to be some ambiguity in simulating systems we can’t get information on, but that’s part of the price for keeping our nation safe, and we wouldn’t want to disseminate information we knew was restricted even if somebody dropped it in our lap. Fortunately that hasn’t happened, and that’s due to the incredible integrity of all the aviators and servicemen we’ve come to know. There are a number of aircraft we wouldn’t touch because there isn’t enough information to do them justice, but the F/A-18E was certainly a viable candidate and we’re happy we made the decision.

David: Let’s ask a more generic question. Weapons that destroy objects in FSX — how did you do it?

Jon: I could tell you but then… Seriously, it’s conceptually pretty easy; You spawn an object and you tell it where to go. The details and managing to work around the limitations (for example in the multiplayer pipeline) are what kills you. Anyone familiar with the SDK, some C++, access to Google, and the drive could get started, but if you’re thinking about the money, you’ve already failed. We’ve been working on this for about a year now, but the first proof of concept literally took a week.

David: How realistic are the weapons?

Jon: I hope this doesn’t sound too rhetorical, but It depends who you ask. There are actually libraries out there that you can plug into to get everything you need, but unfortunately you also need to be a Pentagon official. We’re talking with somebody at Lockheed Martin now about integrating their libraries into the TacPack for some of their commercial customers under the Prepar3D SDK, but for FSX, we’re going to have to use a combination of intuition, logic and published data. There’s actually a lot about weapons that you can extrapolate based on publicly available information. What happens between the launching aircraft and the target is usually a fairly straight-forward result of an “ideal” condition limited by physics. In the case of bullets and bombs, it’s pure physics and very little ambiguity. Guys have been working a long time at places like Raytheon and Hughes to make weapons do their jobs “ideally”. We have the luxury of being able to START with ideal and work backwards. 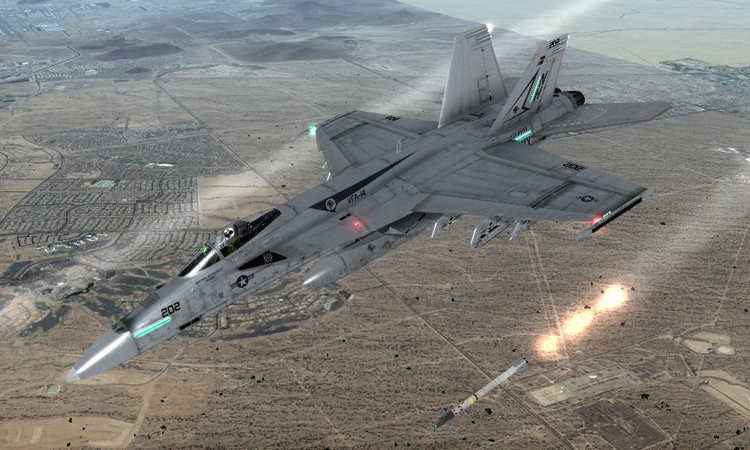 David: Does the argon of the AIM-9 deplete over time, causing an overheat of the seeker?

Jon: We will initially offer the AIM-9M and AIM-9X. The AIM-9X has an internal closed-loop cooling system and doesn’t need to be externally cooled by either argon (USAF) or nitrogen (US Navy). The AIM-9M uses a nitrogen bottle housed in the launch rail, and an IR cool switch in the cockpit can be used to override the automatic cooling cycle. The Superbug has never simulated the need to start/stop cooling, but we can certainly consider the option to degrade the sensor if cooling is overridden.

David: Is the option to cool or uncool the missile available?

David: Can a buddy lase for another aircraft dropping LGBs?

Jon: Yes. A laser pulse frequency in the form of a coded entry is established by the LDT aircraft and anyone with an LST on that code can slave to it as long as the quality of the spot isn’t attenuated too much. This applies to AGM-65Es and all LGBs.

David: Does the laser have limitations where it will only be able to fire below 25K?

Jon: This is called atmospheric attenuation and in the real world it’s a function of primarily absolute humidity and slant range rather than a set altitude. But the answer is definitely yes, we model limitations.