As one would expect with a game with a significant learning curve, DCS A-10C Warthog comes packaged with training missions. In a great step forward from DCS: Black Shark, DCS A-10C Warthog offers interactive training missions with professional voice-overs and cockpit control highlights to help fledgling pilots learn their way around the single seat fighter. The missions cover “just” introductory material, but if you complete each of them, you’ll be able to takeoff, execute simple attacks, land, and will have the basic foundation of knowledge to continue learning more advanced techniques.

In addition to the all the effort spent on the training missions, the tooltips in DCS A-10C Warthog are context sensitive and quite helpful. Not sure what a button or switch does? Leave your mouse over it and, more often than not, a detailed explanation will pop up. Even the buttons on the MFCD have a specific tooltip for each one, depending on what’s going on the MFCD page at that point in time. Really impressive, especially if you think about the effort that went into making these tooltips. 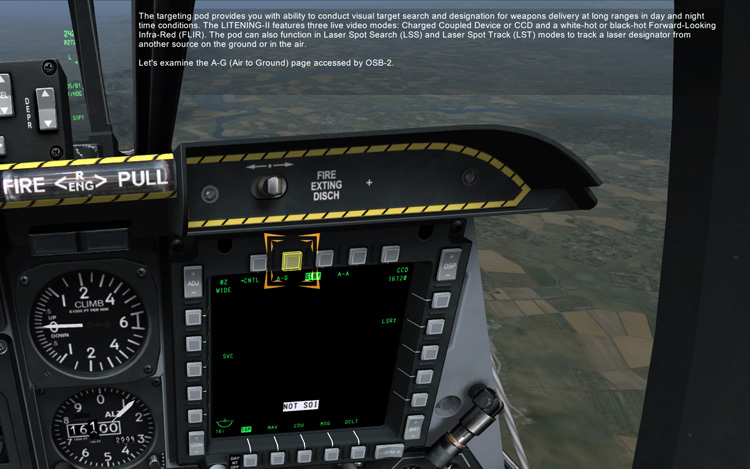 The included training missions won’t prepare a pilot to be fully operational, however. Even the most talented and experienced combat flight simulation pilots will experience a learning curve with the new Hog so don’t be discouraged if it takes you a few missions to get the hang of what might seem like basic skills.

Still looking for more information? Check out SimHQ’s Warthog Reference subsite here for links, documents, and helpful articles on how to fly and fight in the A-10 Warthog.

Figuring out which switch does what is hard enough to do when you’re not hurtling 200+ knots toward a bunch of bad guys. Pressing the pause key helps collect your thoughts, but you still have a bunch of switching to do. Eagle Dynamics has introduced the “Active Pause” feature that freezes your aircraft’s position in space, letting you take your sweet time to get all your buttons in a row. The downside is that only your plane gets frozen. The enemy that you’re trying to target is free to move — or shoot at you! — while you’re heads down in the cockpit.

Just as in the previous DCS installment, players can chose to be thrown automatically into a canned combat scenario and run in, guns blazing. Instead of a single scenario, however, DCS: A-10C Warthog offers five different scenarios of three different difficulty levels. Each mission is very similar to the others starting you off in the air loaded with a good variety of weapons. Targets start out easy (unarmed stationary supply trucks) and escalate up in difficulty, including an AAA-defended bridge and beyond. A pleasant and easy to understand voice walks you through each target set, giving you an on-the-fly heads up of what to expect next. The repeatability of the missions makes them a great resource for combat practice outside the training missions.

The Create Fast Mission menu item links to the Mission Generator feature, an unexpected and quite welcome surprise that puts you smack dab in the middle of a randomly generated battle scenario.

Although Eagle Dynamics never hid the fact they were including this handy dandy item in the DCS: A-10C Warthog package, the usefulness and agility of the Mission Generator is mind-blowing. The simple-to-use interface makes it easy — and fast! — to create a customized battlefield scenario complete with attack aircraft, fighters, attack vehicles, and even JTACs to help guide you through the mess. All it takes is a couple of clicks of the mouse and you’re flying in a unique combat scenario.

Even the best designed mission files can become predictable after a few plays (AAA over that hill, MANPADs in that village over there, yawn, etc.) but the Mission Generator cooks up a fresh war each and every time. This hidden gem will help novices hop into new and exciting ground battles without having to monkey around with the Mission Editor while advanced pilots can tune the generator’s features to create a battlefield experience suited to their tastes.

Just as in DCS: Black Shark, there are several campaign mission series included in the delivered package: Devil’s Cross, Georgian Hammer, and The Shore. The missions are well designed (read the briefings!) and fun and challenging to fly, but campaigns are still single missions that are somehow linked to each other. DCS: A-10C Warthog includes a complex new campaign builder where a mission designer can link missions in phases based on player performance (a little more on this later), but, like many Falcon 4.0 fans, I still pine for the days of a battlefield-wide campaign where each sortie takes place in the same dynamic world. That said, having experienced the campaigns, I tip my hat to the mission designers for coming up with detailed and outright fun missions that follow a believable storyline. 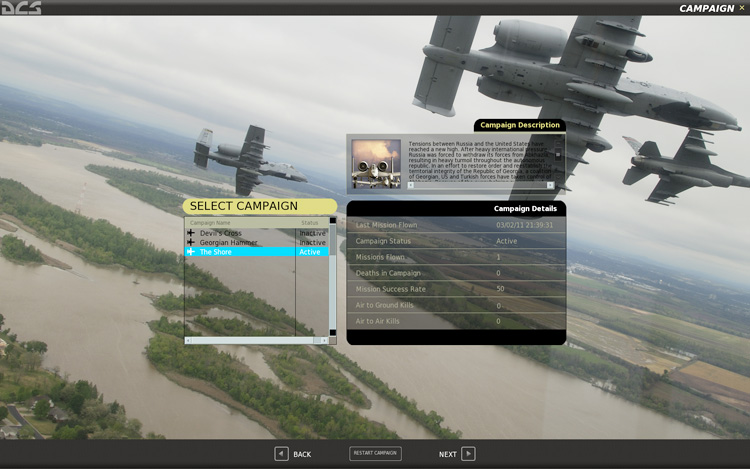 DCS: A-10C Warthog includes a campaign builder tool that enables mission builders to string together related missions to help tell a cohesive story. Builders assign point values to certain objectives in their mission. Once a player has completed a mission, the next mission is determined by their score in the previous mission. Missions can flow back and forth in the story line depending on the players performance and adept builders can create very interesting mission sequences.

Any mission is automatically recorded as a track file (.trk) that can be saved for later playback. You can share the file with friends to flaunt your mad tank-busting skills. Playback is similar to previous Eagle products: starts at beginning of the mission and only plays forward, although you can use the time compression shortcuts to speed it up. I’ve experienced some instability in some of my longer more complicated tracks (playback action is different than when I recorded it), but in general the playback function works just like on DCS: Black Shark and Flaming Cliffs 2.

As one would expect, multiplayer on DCS: A-10C Warthog is the ultimate experience. In one mission there were three of us tag-teaming groups of BTRs, BDRMs, and T-72s all while dodging SA-11s and streams of bullets from angry ZSU-23-4s. Like most air combat flight sims, a third party voice communication system, like TeamSpeak or Ventrillio is required to have decent tactical conversations as the text chat feature simply doesn’t cut it during the intense heat of close combat. Voice comms also gives you the chance to try out all the new brevity codes you will be learning: “Mudspike, 3’oclock!”, “One is rolling off hot”, “Rifle!”, “Three is Winchester”.

A big disappointment in the multiplayer experience was that the datalink functionality was not all there. Although online players can see each other’s position on the Tactical Awareness Display (TAD) after setting ownership and group ID’s correctly, they are still unable to broadcast sensor points of interest (SPIs) or send specific datalink messages to each other. This significant component of multiplayer play will be sorely missed and you can bet there will be a bunch of folks reading the Eagle Dynamics forums closely to see how soon this critical function will be fixed in a patch.