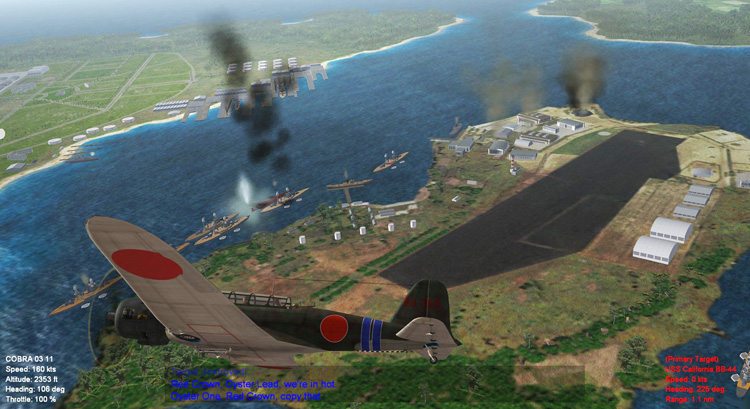 Graphically the game is a mixed bag. The big issue is the engine that is used to create the missions. Honestly, the Strike Fighters engine wasn’t cutting edge when it was released and after eight years it is really showing its age. It’s not that the game looks bad, it looks actually quite good for the age of the engine. It just looks dated. If I had to compare it to another current game I would compare it to Aces High II, at least as far as both the aircraft and terrain models look. Again, not bad, but compared to more recently developed sims like Rise of Flight or DCS: A-10C Warthog. The SF2 support of DirectX 10 helps a lot when compared to the original SF version.

What the “dated” engine does allow is more things on the screen during action sequences. just like European Air War took advantage of it’s less than cutting edge graphics to put large numbers of aircraft on the screen in several of the scenarios. While the dozens of planes sometimes found in EAW probably aren’t practical or seen, I did see formations of 20+ bombers along with escorting fighters, attackers and fairly detailed ship models.

There are some minor graphic glitches in Rising Sun. Some Zerocinco knows about and a couple that have taken the team by surprise. They haven’t been able to get beyond some issues with shadows in the game, and while it would be nice to have, I am not losing any sleep over it. Some are unavoidable. Apparently a recent Third Wire update is notorious for having problems with prop graphics and motoring down on the aircraft causes the windmill effect and doesn’t look right at all. Best to stay away from the Third Wire expansion packs for now and add only the patches to the base SF (or SF2) engine. 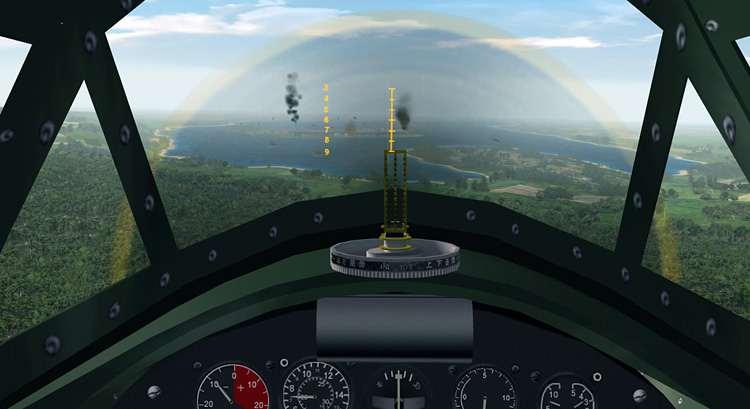 One thing I don’t like is the fact that trees in the game don’t appear to actually be part of the scenery and have no collision detection. I find that I can fly right through trees and that they are graphic ornaments, especially on Wake. Any update to the game should correct this. It is mildly frustrating to go through an entire mission, immersing yourself in the battle against a flight of G3Ms only to bring your shot up plane home and have it magically make it through a tree as you try to nurse it back on the field.

The feeling of taking off from an Imperial Japanese aircraft carrier on December 7th is impressive, especially when you see aircraft spinning-up on the other five carriers in your task force. 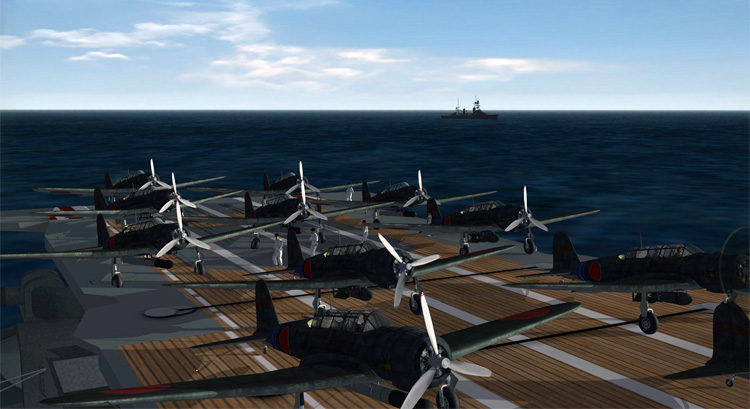 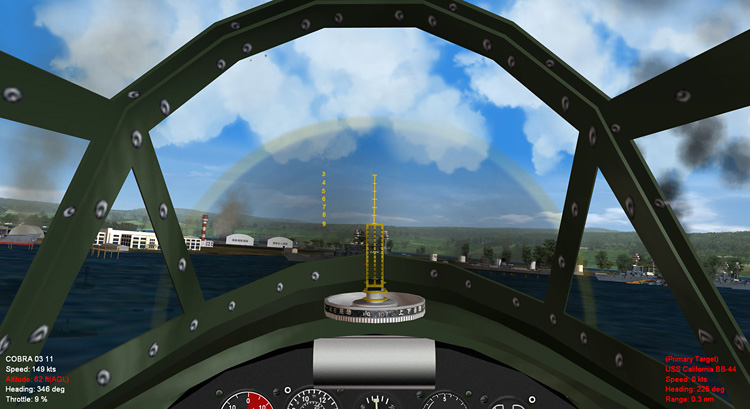 Likewise, seeing the battleships from the gunsight of your bomber is somewhat sobering. If you look at the view of me lining up on the USS California (I was going too fast and misdropped my torpedo) you can get that feeling.

That mission put me in the cockpit of the Kate lining-up on the California, it was sobering to think about. Especially when I remember that my wife’s grandfather served aboard that ship and had several of his friends killed aboard her. If he hadn’t gotten out of the Navy in August of 1941, he could have been killed too. I flew it a couple of times for this review’s screenshots, but I’m not sure I will fly it any more. It was a little too disturbing for me.

There are a lot of missions like that. In all honesty, the “big ones” — the sinking of the Repulse and Prince of Wales, the Pearl Harbor attack, the defense of Wake — were ones that made an impression on me. 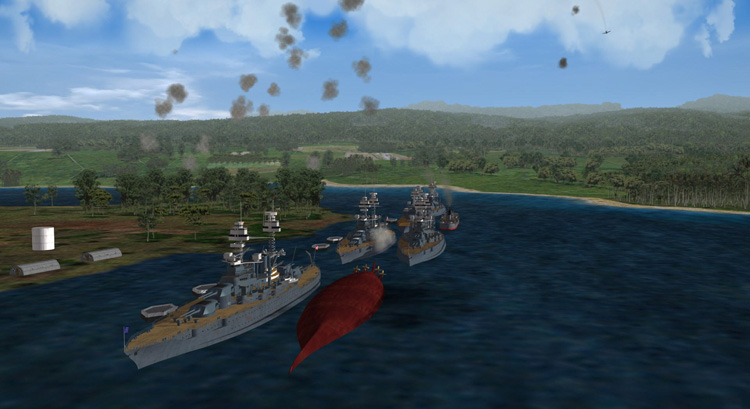 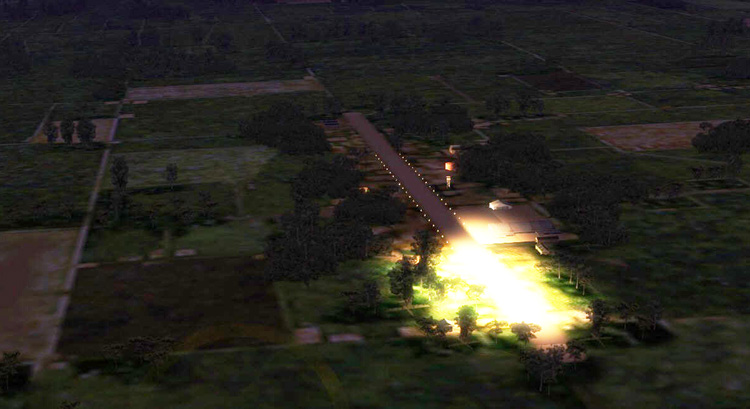 Flight models are generally comparable to most of the aircraft of similar types that I have played. I have never flown a P36, but from what I have read, it didn’t turn quite as well as what is portrayed in the game. The Zeke flies like a dream and it takes a little bit of work to get the plane into a spin, something that I have read is correct for the model. The P-40 flies mildly heavy but to me is maybe a little too quick in the turn. It is hard judging models because I have flown about 10 P-40Bs in my simulation life, from Air Warrior through the IL-2 Series so it is always hard to figure out what one is the most accurate.

The Ki-27 is downright fun to fly; I would love to have a P-26 to take up against it. In general, the aircraft are roughly equivalent to what they should be in real life but they don’t feel exact and the flight models feel like the flight models in Strike Fighters. That is to say roughly correct but definitely in the lighter category of modeling, as the Third Wire Strike Fighters series was intended. That isn’t a major complaint on my part but if you are a nitpicker you probably will not be happy.

The only real flight model issue I had with the game (and a bug that needs to be fixed) is with the P-40 and its damage model when the engine is knocked-out. A dead engine in the P-40 creates a strange flight model where the plane actually feels like it has lost its engine but still has the ability to maintain flight. Even with retracted flaps the plane seems to want to rear up and acts like a paper airplane with no weight in the nose. I actually had the plane in a nose up position at an 80km/hr speed rate, something that would have been completely impossible in a Cessna, much less a P-40. To be honest, it caught me by surprise and if I had the time I would have liked to have seen if this was a P-40 problem or if all the aircraft did this. 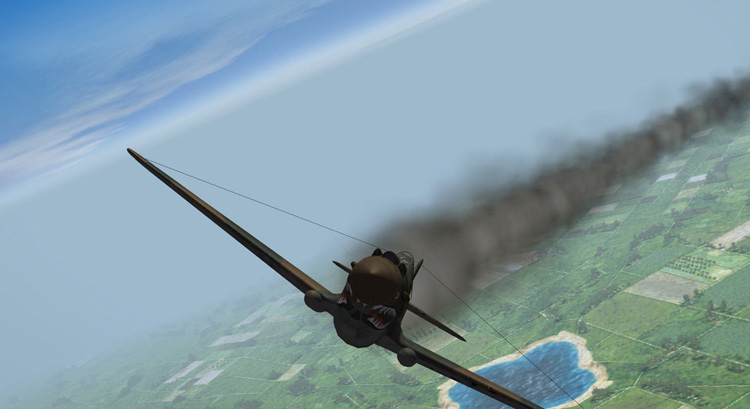 As I said before this is a single mission add-on (although you can fly instant action in the game) so there is no campaign. That is fine, theYAP team has never tried to create a campaign for any of their add-ons and knowing that before you get into the game is fine. The large number of single missions will give most fliers more than enough hours of air time to compensate.

What is disappointing is that there is no ability to fly multiplayer missions in this game. The original Strike Fighters version allows for multiplayer missions, albeit lame, but the updated SF2 series shipped sans any multiplayer. This is a Third Wire decision and not a Rising Sun decision to have the multiplayer absent. What is sad about this is that many of these missions really would be outstanding in multiplayer. Pearl Harbor, in all honesty, has never been rendered better and I would absolutely love a multiplayer game with P-36s, P-40’s, A6Ms dogfighting while Kates and Vals try to destroy the Pacific Fleet. It would have been beautiful. I have flown several online Pearl Harbor scenarios in games like Warbirds, Aces High and the IL-2 Series and they are a lot of fun.