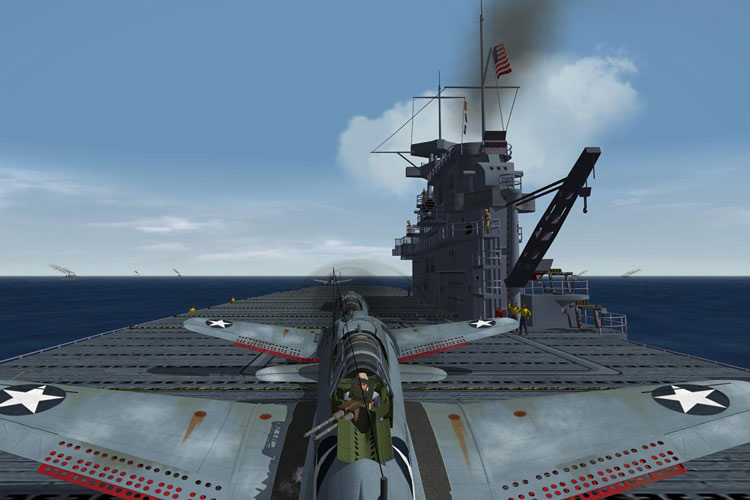 First off, let’s talk about the flight models in Rising Sun. Rising Sun runs off of the Third Wire Strike Fighters engine of course so the limitation of SF come into play with Rising Sun overall. Just like in the first version of RS, the second version has to deal with some of the limitations found in what is essentially a jet simulation engine. Like the first version this means that to me, the flight models felt somewhat light compared to more “realistic” flight simulations like Cliffs of Dover or even Pacific Fighters.

Taking off from a carrier tended to be, to me, a little bit too easy; I have found that in some games like Aces High and IL2: Pacific Fighters, I would have to make sure that I kept enough rudder in play to prevent torquing off the flight deck while taking off. Aircraft roll way to straight off of carrier decks. Stalls and spins are a little too easy to get out of and in some instances very difficult to get into. Damaged aircraft act strangely at times. This is the result of trying to fit a jet engine model into a prop engine simulation.

I’m not going to rip too much into the YAP team over this because, in all honesty, they have done a fairly decent job considering the engine they had to work with. The Strike Fighter’s engine was never really considered a high fidelity flight model engine to begin with and since it was designed primarily with the jets in mind, the ideas of torque effect and some of the transient lift issues you would get with higher wing loading aircraft represented in Rising Sun were never planned for. So, all things considered, it probably is as good a job as able considering the clay the team had to work with. 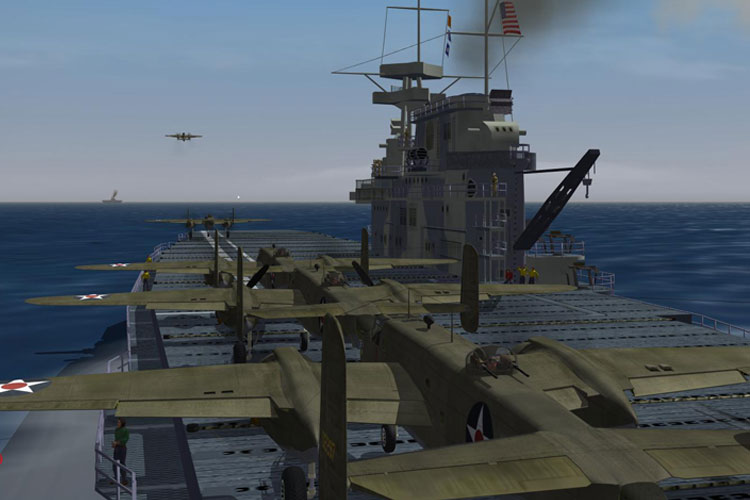 Graphically, again the game has to deal with the Strike Fighters engine. I will make no bones about it; the SF engine has looked dated from the release of the first version of the game. Yes, patches have improved it and the YAP team has done a good job creating decent looking aircraft and ship models but there is no way around the fact that graphically this is not a cutting edge game. In addition, some of the ‘fixes’ that have been made in patches to the original game have created some graphic weirdness covering ship and some land models in the game. Luckily for me I have an older, unpatched version of SF2 so I have been able to avoid that trouble.

But don’t buy the game expecting ROF or even CoD type graphics. You won’t get them. The cockpits are well rendered but not as micro textured as comparable games. The ships however look outstanding are a treat to look at. Water looks, well, ugly. Again, this is related to the SF engine and there is little that the YAP team can do about that. Aircraft are well rendered, not picture perfect but they look certainly well enough to keep your sense of disbelief suspended, unless you are a graphics fanatic. If you are one of those then you probably wouldn’t have purchased this game anyway. 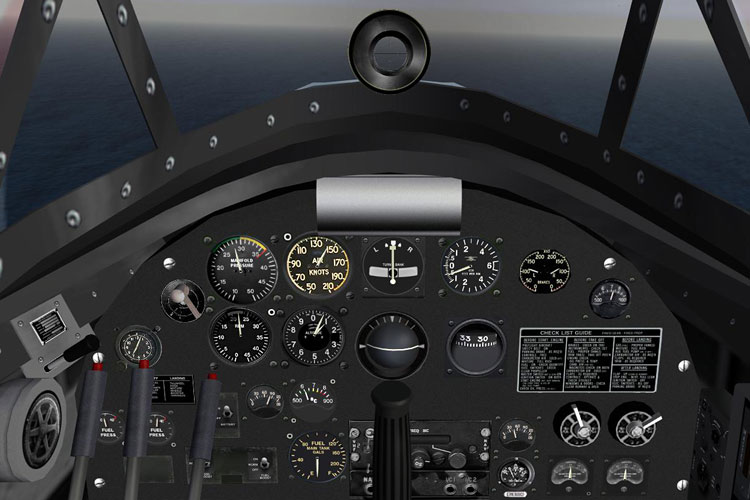 To be honest, I didn’t really want this game for the graphics anyway. The main reason to buy the game is to fly fairly realistic missions from the timeframe. The twenty six missions that ship with RSv2 are all top notch, fun and very replayable.

I have complained a lot over the recent years over the relative lack of decent single player missions that ship with most modern games. In the rush to create campaigns and multiplayer experiences for the virtual flier, I think that many developers have ignored the importance of a good single player experience. Part of the reason that many of us buy WWII flight simulators is so that we can pretend to be a pilot flying in a certain battle. While campaigns and multiplayer are certainly important there is a need to create a single player mission system that allows people to experience that feeling of being in the battle.

YAP has done a good job creating these missions. Butch O’Hare’s defense of the Lexington in February of 1942 is really the first true recreation of his historic feat, in which he almost single handedly saved his ship from a G4M Betty attack. I have tried multiple times but I have never been able to come close to his feat of three Betty’s shot down and two more damaged (the original claim was five shot down but it has been proven to be incorrect).  Unlike O’Hare I have had my plane riddled by the defensive armament of the Betty’s. Let’s just say there will be no MOH for me. 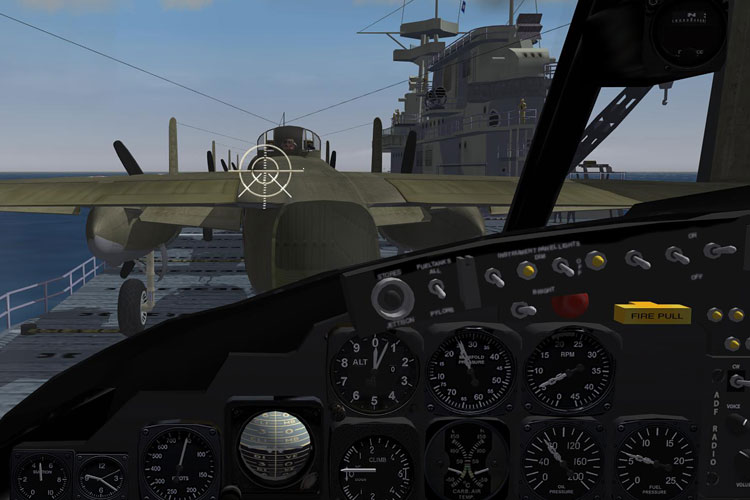 All of the missions are well done. The fighting during Coral Sea is especially interesting for me since my grandfather was a Navy Corpsman aboard the Lexington during the battle and managed to get off the ship with only his uniform and his Navy Corpsman manual. I wish I could have gotten more info from him prior to his death, especially about this battle.

I will give one example of the attention to detail that is put forth in these missions. For those that don’t know the USS Lexington was originally laid down as a battle cruiser. When the Washington Naval Treaty of 1922 was approved, the Lex, and her sister the Saratoga were destined to be scrapped or converted to aircraft carriers.  But there was still fear of surface units so these two carriers were originally equipped with eight 8-inch guns in four turrets. By the time WWII started it was felt that these larger weapons were probably not going to help the ships so they were in the process of being removed. The plan was to remove the 8-inch guns and replace them with dual mounted 5-inch guns similar to the weapons found on later Essex class carriers.

The Lady Lex at Coral Sea was only partially done with this change when she met her fate. The 8 inchers were removed after her battle around Rabaul (where Butch O’Hare showed why he received the Medal of Honor) but she didn’t have time to receive her five inch replacements before Coral Sea. Instead she mounted quad 1.1 inch AA guns. What is interesting is that the ship seen in Rising Sun is the Lexington as she really was configured in April of 1942. The only other game that has the Lexington (Pacific Fighters) has the Lex with her 8 inchers which were gone by the time Coral Sea occurred. These little details are present in many of these missions, right down to the correct details on each individual plane. Very nice work.

If I have any critiques of the mission set it concerns two different things. Personally I think the battle for the Philippines should have had some representation here, especially since the model of the P40 was already present in the first version of the game. I know it would have meant a whole new area to reproduce but the destruction of MacArthur’s air force is curiously not present. In addition, the actions of the pilots actually at Midway, to include the intrepid B-26 pilots and the Buffalo flying Marines are not present as well. Again, it would have meant more work by the team but it was a period during the battle that I would have liked to see. 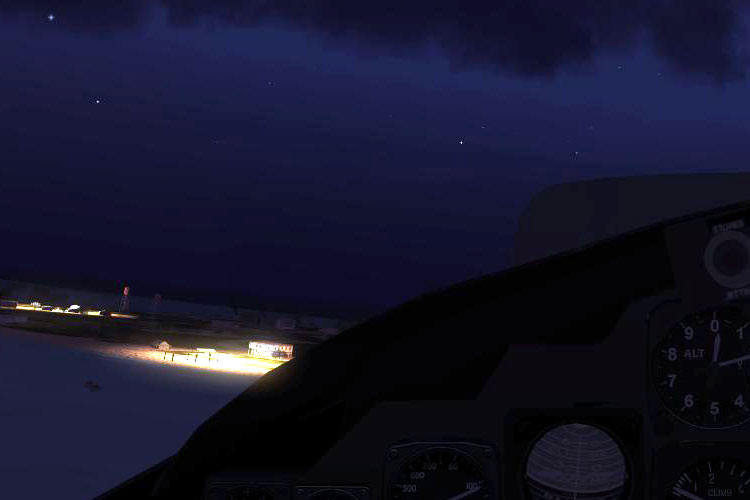 Boy, these kinds of games are hard to review. Like the first version of the game, you can’t separate Rising Sun from Strike Fightersbecause you need SF or SF2 (or one of the various versions released by TK) to play the game. That means you have to deal with the good and bad of the SF engine. While the engine has certainly made itself flexible enough to create add-ons like Rising Sun, it also tends to limit some of the things that could be done to make this a top tier game. For one, there is no multiplayer in Rising Sun, a limitation on the SF engine. There is no campaign, something that the YAP team specifically planned but would be difficult none the less. The graphics are OK but not outstanding — again due to the engine involved.

I also said the other major issue is the cost factor. Rising Sun isn’t expensive, around 30 dollars for the download version of the game. However, it needs Strike Fighters or Strike Fighters 2 to run and with that game running somewhere around 30 dollars as well then 26 missions start to get more prohibitive. I personally found most of these missions worth the outlay but not everyone will. As I said in my review of version 1, my biggest problem with using the Strike Fighters engine was that dedicated WWII pilots may not necessarily be interested in a jet simulation so many of the WWII crowd may not already own Strike Fighters.

I know “Zerocinco” has high hopes in continuing the series all the way through to the end of the war, or at least through the major air battles like the Marianas Turkey Shoot and the Battle of Guadalcanal. I am hoping that he can maybe bundle all of these individual mission packs into a “gold” version that will make the idea of buying both the missions plus the base game much more palatable to the WWII pilot that wants to try these games. Right now I am afraid that there are a good number of people that are just plain missing out on this because the concept of paying for a game just to play some missions seems less than financially prudent, especially these days.
I understand it and it is too bad because these are some fun missions and something that I have enjoyed. Any company that is considering putting together a Pacific War flight simulation should talk to these guys.